18-year-old Aliyah Shipman has her sights set on participating in this year’s game, representing Haiti. Aliyah is Muslim and Haitian according to WLRN reports.

There are only a few families who understand what it feels like to have their child qualify for the Summer Olympics. The medal wrapped around taekwondo athlete Aliyah Shipman’s neck last year symbolized years of training and dedication that led to that victory — her proud parents, who had a front row seat to Shipman’s hard work, cheered for her opportunity to fight at the Tokyo Olympics for Haiti.

But that opportunity is in jeopardy now, right as the games are set to begin. Unexpectedly, according to her family, the U.S. Olympic Committee and other governing bodies have taken steps toward disqualifying Shipman — which took her by surprise. Her family’s taken the U.S. Olympic bodies to court — but time is running out.

“This whole situation. It’s a nightmare. It’s one of the worst things I had to ever go through,” says Shipman, who studies finance and accounting at the University of Miami. “The happiest day of my life is when I qualified for the Olympics, so just having it taken away from me, it’s so much for me.”

Haiti isn’t typically known for having the best taekwondo fighters. The Plantation native say’s she’s “still training like I’m going to the Olympics.”

“But of course, mentally, it takes a little bit of a toll on you because you don’t know if you’re fighting or not,” Shipman said.

The welterweight fighter, who is Muslim and Haitian-American, trains at the I-Fight Mohamed Ali’s Martial Arts & Fitness Center in Sunrise. The Plantation native says she wants to be a beacon of hope for Muslim girls in her community. There aren’t any others competing at her level in the area. And she also feels a sense of pride fighting for Haiti — her great-grandfather is from Haiti. Her mother is of Indian descent.

When Aliyah Shipman was 16, she competed for Team USA at the Pan Am Junior Championship, one year before she qualified for the Olympics for Haiti.

The U.S. Olympic Committee and USA Taekwondo claim that Shipman violated eligibility rules when she switched national teams —rules that are implemented by the World Taekwondo Federation, an international body that governs international sport. 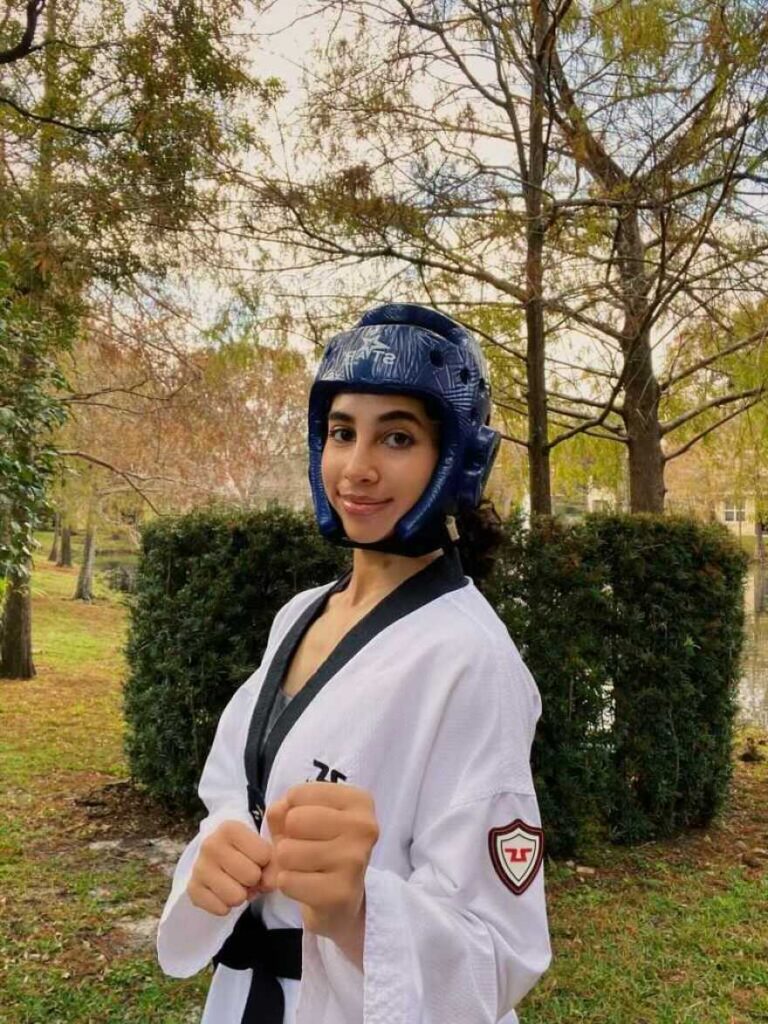 “There’s a rule in the World Taekwondo rule books that specifies that if an athlete has competed in certain events for one country, they cannot compete in the Olympics for another country for three years,” Zahra Shipman said.

She and the family’s lawyer say the rule applies only to athletes 17 years and older. They argue it never applied to Aliyah because she was 16 when she fought for the U.S.

They also argue if there was a problem with Aliyah fighting for Haiti, the complaint should have been filed before the Olympic qualification. She had already been competing for Haiti before that decision.

Zahra Shipman says she’s alarmed by the recent treatment of Black women and women of color leading up to the Olympic Games — the actions taken by the Olympic governing bodies having a negative impact on the athletes.

“Different decisions being made, banning swimming caps that are for larger hairstyles,” Shipman said. “It’s really unfortunate that they appear to be just racist towards biracial [women] or women of color.”

“So it’s been very heartbreaking for her. She hasn’t been able to sleep. She feels like she has no purpose. She’s just just heartbroken. Due to the Olympics being postponed and actually prepared for this for an additional year,” Zahra Shipman said. “And she was in school full time during this time — a very hardworking girl. And it’s just sad to see someone that’s worked so hard, you know, come this close to getting their dream and then someone just trying to crush it.”

He also says day-to-day activities in Haiti were disrupted after the assassination of Haiti’s president. He argues that there were other athletes in similar situations.

“They have taken different positions with respect to different athletes. The rule that they cite has an exception that they ask to be put in in 2015 to their benefit. Aliyah only competed as a junior under U.S. auspices, never as a senior, never in any of the listed tournaments,” Dockterman said. “So why they would apply a double standard to her is a complete mystery.”

Aliyah Shipman fights under the Haitian Taekwondo Federation. Frenel Ostin, the president of the federation, also says the Olympic governing bodies never contested Shipman’s eligibility until after she qualified for the Tokyo Olympics.

“If they really wanted to use that [rule] against her, they would have been stopping her or contesting all of the previous competitions that she has been to but they never did,” Ostin said. “But now she’s qualified, they’re trying to use it. I don’t think it’s fair.”

Aliyah Shipman says if she doesn’t compete in Tokyo this year, she has no choice but to look forward to the 2024 Summer Olympics in Paris.

“It’s so wrong because I’m an 18 year old. I’m so young and I worked so hard to get this spot,” Aliyah Shipman said. “I just think nothing like this should happen ever again.”

When Aliyah was aasked why she wanted to represent Haiti she shared:

“I kind of wanted to go back to my roots and fight for Haiti and give them some representation because they don’t have a lot of representation in sports and especially in Taekwondo,” Shipman said in an interview with NBC Miami.

Would You Do This? – A Couple Offered Wedding Guests Better Food Options If Gifts Were More Expensive

Would You Do This? - A Couple Offered Wedding Guests Better Food Options If Gifts Were More Expensive