50 Cent Responds To The Rumor That Diddy And Yung Miami Broke Up – ‘PUFFY you better fix this.. or you gonna be stuck playing wit my old sh*t’

50 Cent never misses an opportunity to prove he loves a messy rumor!

Social media has been buzzing about the unconfirmed news that Diddy and Yung Miami broke up, due to a few changes they both made on their respective Instagrams.

Something he has done before.

Even though this is all speculation Fifty wanted Puff to know that he better fix the situation before he ‘gets to Miami’.

In addition to that, he shades the mother of his youngest son, who is also rumored to be linked with Diddy.

LOL PUFFY you better fix this before i get to Miami. 😆or you gonna be stuck playing wit my old shit. LOL you know i don’t miss nothing Justin been knocked it off, we keep it player on this side. #bransoncognac #lecheminduroi 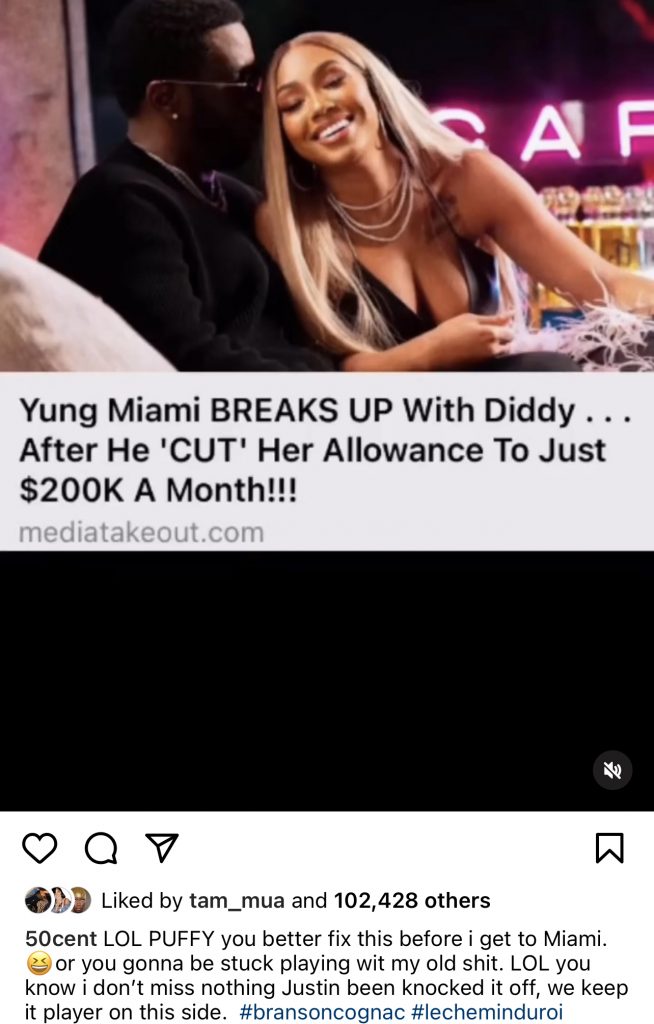 Caresha also known as Yung Miami recently helped Diddy celebrate his 53rd birthday, sharing pictures and videos of themselves having what looked like a great time!

I swear Caresha and Diddy relationship remind me of me and my boo relationship. Just living life and having fun. Have him trying shit he never did before 🫦 pic.twitter.com/95fnlDhIWG

Im not mad at Caresha, like Diddy is terrible in relationships, so like them dating but being single and *seemingly" making each other happy without the commitment aspect is actually cool too.