by emily1phone
in Culture, News Stories
0

Yes, you read that right!

According to Fox News, An all-out brawl that broke out between dozens of passengers aboard the Carnival Magic cruise ship was sparked over allegations of cheating while on the trip, according to an eyewitness passenger who shared a video of the fight with Fox News Digital.

Theresa James, who said she is a travel agent, told Fox News Digital that the fight started just before 2 a.m. on the ship’s fifth floor, where a dance club and casino are located.

Beer bottles were smashed, and a woman may have been cut during the chaos, James said.

The brawl lasted about an hour, according to the travel agent, and took the parties involved from the fifth floor to the ship’s first floor, which James described as a huge distance.

She said the altercation wasn’t physical the whole time, and an estimated 60 people may have been involved.

Although the initial disagreement was between two passengers on the nightclub dance floor, it quickly spiraled out of control with more and more people piling in.

The fight occurred on the final night of the ship’s eight-day Caribbean cruise with stops in Dominicana, Turks and Caicos, and the Bahamas.

Theresa James said the fight started just before 2 am and lasted for an entire hour in an area where the ship’s nightclub and casino were located.

All the while a couple of ship security guards attempted to break up the fight where they could – however, they were vastly outnumbered.

It prompted the Coast Guard to escort the ship back to dock and the NYPD to open a probe.

James explained how the guests involved in the fight were in her words, ‘ignorant fools acting stupid’.

She praised the security team for jumping into the middle of the brawl and ultimately calming things down.

One witness, tweeting under the handle @nyeem0, said he was ‘at the bar listening to my own music sipping a Shirley Temple, then the brawl broke out of nowhere!’

He added that some of the passengers were ‘injured and cut up from glass’ and that ‘most if not all’ of the ship’s security guards descended on the club to restore order.

The witness added: ‘it was the last night so i guess they wanted to go out with a bang, but a lifetime ban from cruising is wild lol.’ 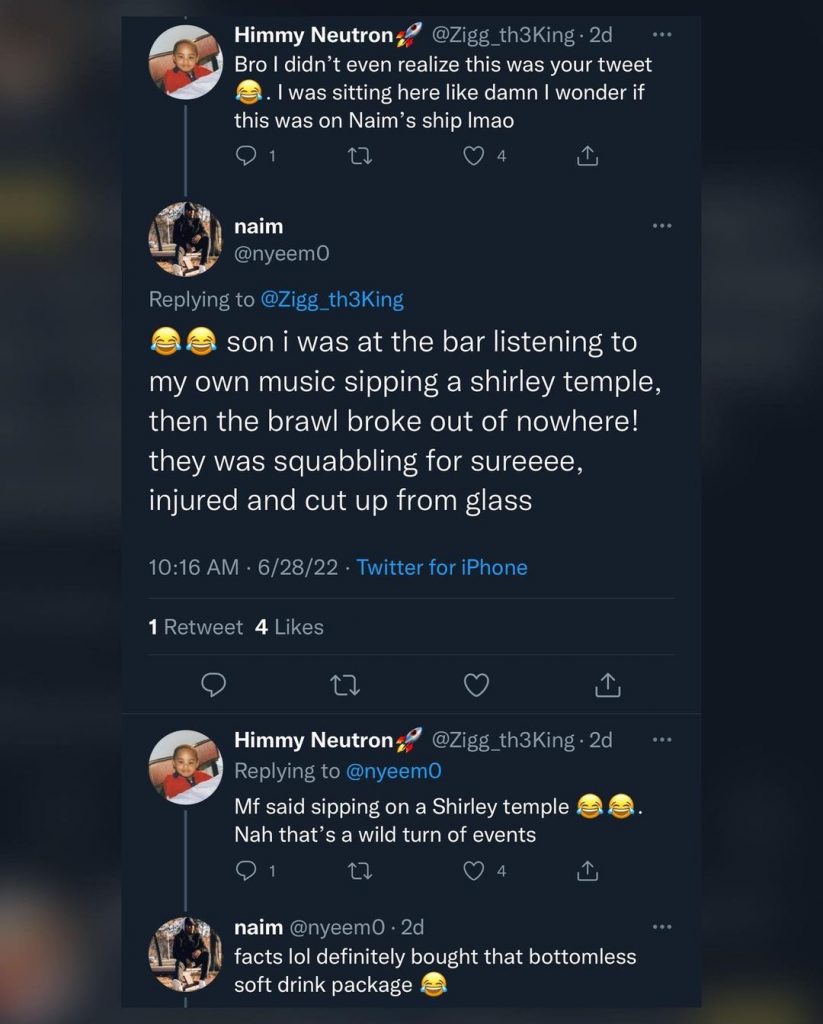 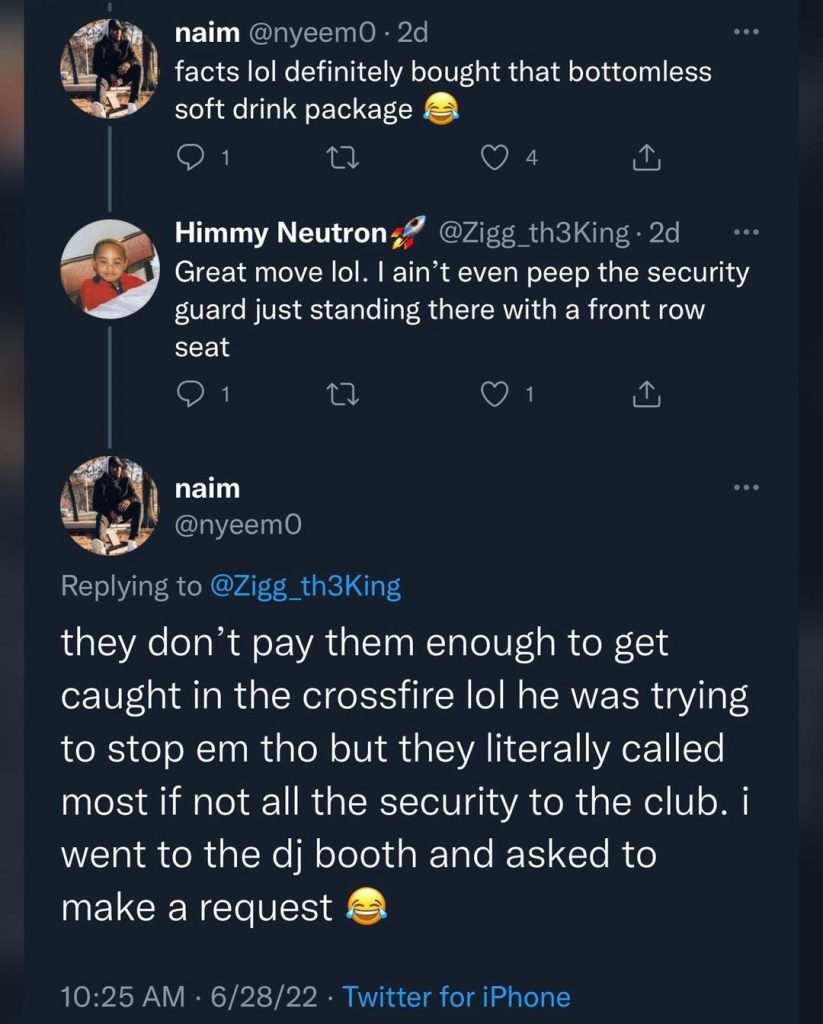 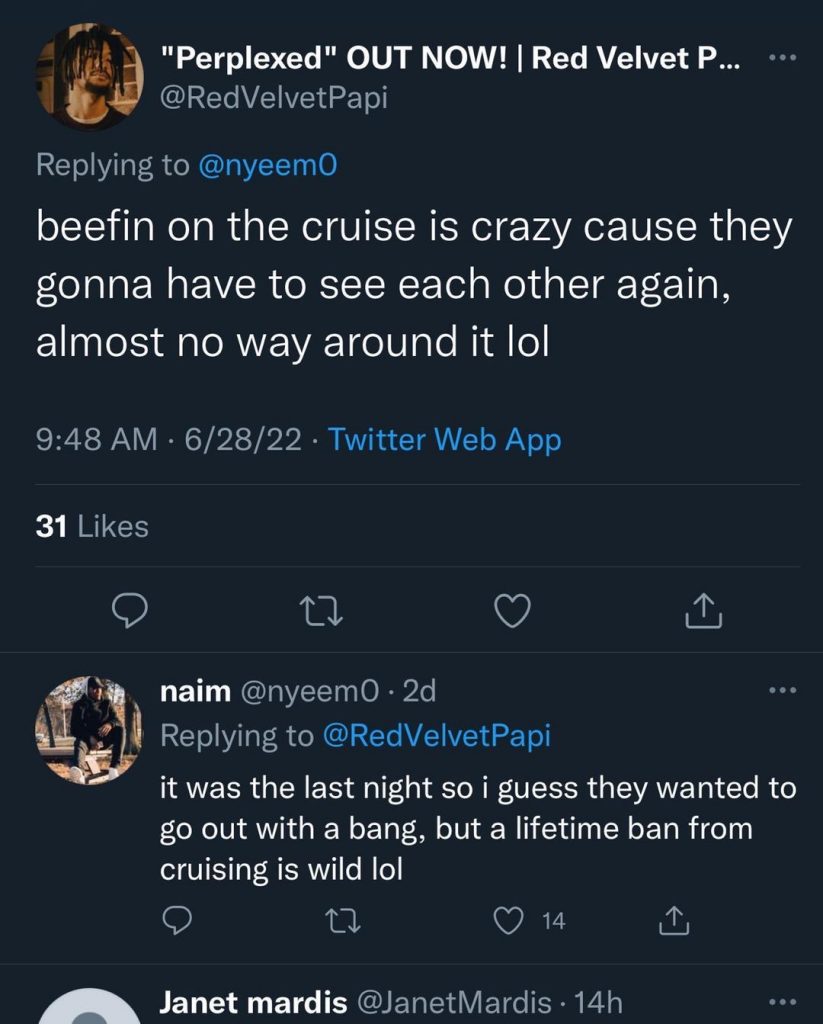 The brawl took place as the ship approached harbor in New York, but it’s unclear whether the vessel was in New York, New Jersey, or international waters at the time of the fight, making criminal jurisdictional issues murky.

There were no arrests reported in the aftermath of the fight, and it was unclear which agency would lead the investigation.

Following the fight, cruise line officials notified the Coast Guard, which launched a boat from Staten Island to escort it to dock in Manhattan, according to WNBC-TV.

60+ 'person' fight on a Carnival Cruise ship that lasted for an HOUR spanning 5 floors
You couldn't pay me to take a cruise, however, if I did and saw gangs of 'African' Americans on board
I would exit stage right
There is no longer a place to go with out 'Welcome To The Jungle~ pic.twitter.com/n5x9ie8QQH

Thanks to everyone involved in that carnival cruise fight, not only are the cruises dirt cheap this morning but from what I’ve read on here white ppl will be boycotting the cruise line. Win/Win.

This not 60 ppl lol but also this remind me of the time my cousins got into a fight on Carnival cruise too because a man keep touching one of us unwarranted. Lol they knocked that man around silly! And we all sprinted away when security came & my cousin took my damn pizza!! https://t.co/umzf1hDCZb

So Nostalgic! Usher Just Dropped His Tiny Desk Concert And It Was *Chefs Kiss*