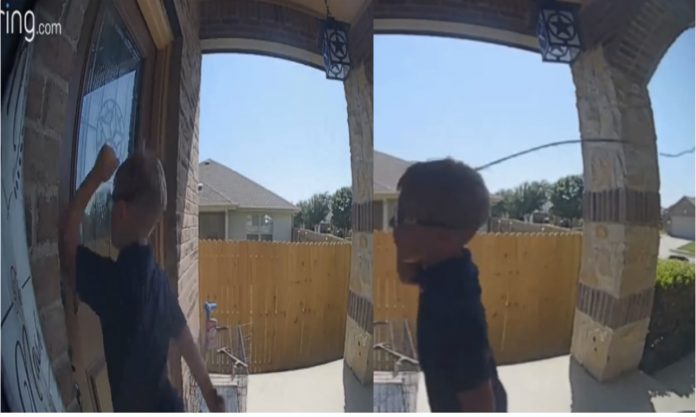 A black family is speaking out about an incident they experienced with their neighbor.

Mom (Mrs. Nash) shared a video taken from her Ring alarm of a white boy who banged on their front door wielding a whip.

According to the details of a video being widely circulated, the boy, reportedly 9 yrs old, approached the door with a large whip, banging and hitting the door.

A few moment’s later mom opened the door and tells him:

“Little boy, you better get your a** up and off my porch before I call the police, beating on my door like this! I will call the police, you need to leave. Don’t you ever beat on my G*d damn like that, GO!”

The Nash’s live in Texas and Star (mom) wrote on Instagram:

**REPOST FROM MY HUSBAND**

Today was a crazy day! This kid comes to my door with a whip looking for my 9 year old daughter, then puts a big ass scratch on the Audi.

The police came out and tells my wife, “it’ll work itself out since he moving soon”

🤦🏽‍♂️ So when I get home, the dad is outside, see’s me walking over to talk to him about the damages and goes in the house.

The dad tells the son to say he’s not there.

A couple minutes later he finally a come to the door with a gun! His scary ass almost shot himself and his daughter standing behind him smh #KidWithWhip #NeighborFromHell #Racism #Forney #BLM #Texas #shareshareshare @95nash_ss

When her husband went to confront the parent of the child, not only was he belligerent but he pulls out a gun and tells the family to leave his family.

The gun goes off, almost hitting the father and his daughter.

This is crazy! Hoping this family remains safe.