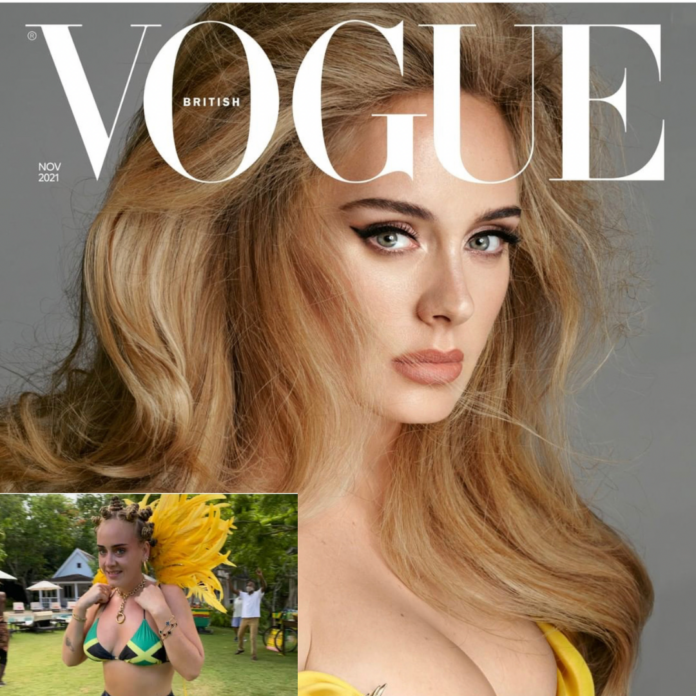 Adele is back and she is getting prepared to release what she describes as her strongest album yet.

Adele is on the cover of Vogue and during her conversation, she touched on Carnival-gate.

Remember when Adele, went to Jamaica last year and was pictured wearing a Jamaican flag bikini and Bantu knots in her hair?

She was called out for Appropriation and told to remove the pictures.

In her editorial Vogue shared that Adele was quick to admit that she doesn’t always get things right.

Read below Via Vogue:

On holiday in Jamaica last year, dreaming of being at the annual Notting Hill celebration

(canceled because of Covid), she posted a photograph of herself at an outdoor party wearing Bantu knots and a bikini top made out of Jamaican flags.

“I could see comments being like, ‘the nerve to not take it down,’ which I totally get.

But if I take it down, it’s me acting like it never happened,” she says. “And it did.

I totally get why people felt like it was appropriating,” she says now.

Her read had been, “If you don’t go dressed to celebrate the Jamaican culture – and in so many ways we’re so entwined in that part of London – then it’s a little bit like,

‘What you coming for, then?’” She pauses.

“I didn’t read the f**king room.” Karma came for her anyway, she adds, drily.

“I was wearing a hairstyle that is actually to protect Afro hair. Ruined mine, obviously.”

Did you think that Adele, wearing Bantu Knots was appropriation?