JUST IN: A jury has found all three men charged in the killing of Ahmaud Arbery guilty of murder.

According to CNN Gregory McMichael, Travis McMichael, and William “Roddie” Bryan Jr. were charged with malice and felony murder in Arbery’s death, which sparked national outrage after a video of his shooting was made public.

It is being reported that Gregory McMichael is looking at life in prison while the other two defendants will likely spend decades in jail.

As reported Gregory McMichael and his son Travis McMichael were accused of following Arbery and fatally shooting him while he was jogging on Feb. 23, 2020.

William “Roddie” Bryan the neighbor of the McMichaels also stood trial accused of trying to block Arbery while he was being chased by the father and son in Brunswick, Georgia. 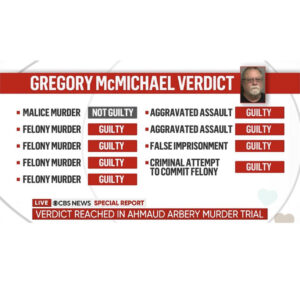 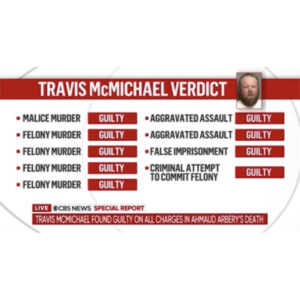 William “Roddie” Bryan is found guilty of all except malice murder and one count of aggravated assault.

“The father of Ahmaud Arbery…screamed out that this was a long time coming.”@SteveOsunsami has more on the reaction in the courtroom following the verdict reading in the Ahmaud Arbery death case. https://t.co/RQvQp7epaw pic.twitter.com/kWwXG50lkO

I want to remind people that while the state trial is finished, save sentencing, the federal hate crimes trial will begin in February. #AhmadArbery https://t.co/Ss2mJm3QPy

Thank goodness that our broken “justice” system occasionally comes up with the right answer. The judge, jury and prosecutors can all come get a plate for Thanksgiving!

Now we wait for February. This man was just jogging.

Watch Teyana Taylor’s Daughter Junie Check The Audience At Her Mom’s Concert – “Whoever Is Acting Sassy, They Need To Get Out”

Are They Dating? – Social Media Is Reacting To The News That Lil Baby Spent 100K On Saweetie

Are They Dating? - Social Media Is Reacting To The News That Lil Baby Spent 100K On Saweetie