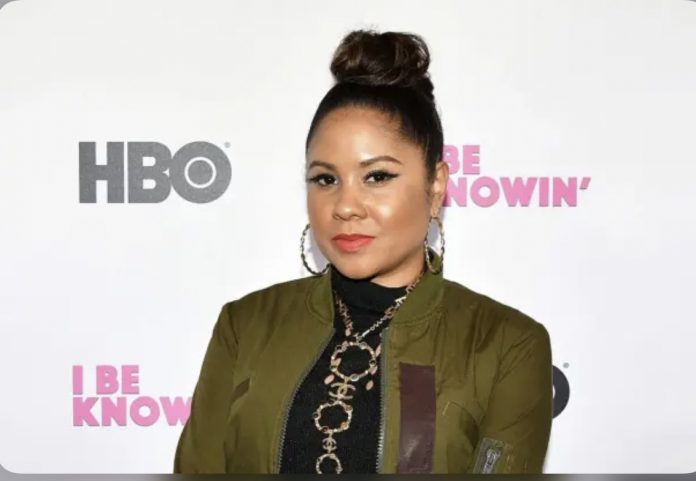 Late Tuesday night, Angela Yee sent out a cryptic tweet about the future of The Breakfast Club.

She said the popular morning show that airs on iHeart Media will “end as we know it” without explaining what exactly she meant.

“It is really exciting, I honestly can’t believe this is happening,”

According to The Root – Yee said details of her new show, such as what time it will air, the start date and how many markets it will be syndicated to aren’t yet finalized. She didn’t give a date for her last Breakfast Club broadcast.

Yee’s blew up Twitter with speculation about her departure with two cryptic tweets late Tuesday. “God is good,” she wrote in the first before dropping this: “The breakfast club as you know it is officially over.”

A new episode of Assets Over Liabilities airs today on @revolttv YouTube channel at 5 pm est. This episode’s guest is the one and only @angelayee pic.twitter.com/YC5n0x8hHR

“Actually, my contract is up now,” she said. “It’s been up since December.”
All three of the show’s hosts have been moving their brands in different directions in recent years.

In addition to his expanded iHeart deal, Charlamagne also hosts “The God’s Honest Truth” on Comedy Central. DJ Envy is a real estate investor who hosts seminars on his strategies around the country, and Yee hosts “Lip Service”, a podcast about sex and relationships distributed by Apple Podcasts.

The Breakfast Club is trending as people react to the news, sharing some of their favorite clips.

Since The Breakfast Club is over here’s the worst interview question I’ve ever seen in my life https://t.co/m3IZIVAofK

The breakfast club peaked with the Soulja Boy interview:pic.twitter.com/pFlQZdVmFQ

Now that The Breakfast Club is officially over, I figure it's time to bring back this iconic clip 🤣 pic.twitter.com/jfVKLn1Bx8

Damn Since The Breakfast Club Is Over This One Of The Funniest Clips, Gucci Airin Yee Out 😂😂😂 pic.twitter.com/17iU9oMAhS

“Disappointed in Black folks celebrating The Breakfast Club ending” they was in that radio station asking ppl who raped they sister.

The Breakfast Club really ending 😭💔 but since everybody dropping their favorite interview…💀 pic.twitter.com/66cGfkpTrT

The Birdman interview on the Breakfast Club was one of the most iconic moments in Hip Hop history. pic.twitter.com/BilXOQkXHW https://t.co/XYa5ihIbSG

the breakfast club inspired a nation of men to broadcast their thoughts. irreparable harm was done!

The Breakfast Club gave us one of the greatest redition of Rudolph the Red Nosed Reindeer. RIP DMX https://t.co/muVGOquTBw

Angela Yee: The Breakfast Club as we all know it no longer exists

Twitter: Good riddance. Show was trash as fuck anyway. Fuck all of yall I never liked any of y'all muthafuckas all y'all can go to hell