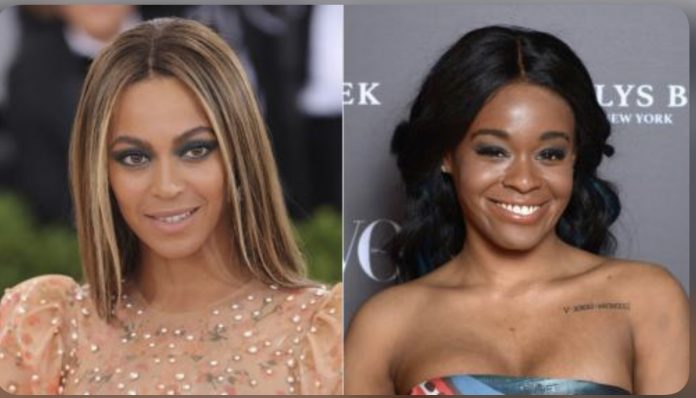 Azealia Banks is on another rampage and this time it has everything to do with Beyonce and apparently Solange.

AB took to her Instagram stories to tell people to stop remixing her song’s with Beyonce’s latest single “Break My Soul”.

She said it sounds ‘horrible’.

In addition to that, she does not like that Bey was inspired by her.

“Beyoncé has been trying to write me out of my own narrative for like years, at this point. It’s so f**king weird.”

“So, early Azealia Banks records — so what are you trying to do? Like encapsulate my music in time and say like it’s vintage, as if my last three releases have not whooped you’re a**?

Are you kidding? As if I’m not showing major versatility and all of that?”

“You wanted to be Solange. You wanted to be like Chloë Bailey, and do a ‘Little Mermaid’ movie, and you don’t include Azealia Banks. Like, oh my f**king God. You’re a joke. You’re so sneaky.”

“You’re trying to erase my contributions to House music, Dance music, Electronic music, and all that and make it as if I’m like f**king — God knows f**king who. Just encapsulate me in time. You’re a f**king creep Beyoncé and watch everything I do.

Just the levels of thirst. Yeah, you wanna write me out of my own narrative and then like, try and own that narrative and be that revolutionary Black feminist rebel who’s into ATRs and Dance music, and all this other stuff. You are so f**king lame.

You’re never going to write me out of anything that I create for myself. I don’t care how many f**king budgets this n**ga gives you. Mood board sh*t from Instagram and make some hodge podge ode to Orisha.”

“C’mon. It’s so obvious at this point. Early Azealia Banks records as if I’m Ronnie Spector. No, you’re the vintage h*e. Are you kidding. You are the vintage p*ss. That wig on the cover of that single is vintage as f**k. You’re never going to be cutting edge. Never.”

“You girls (Beyonce and Solange) will just never be cutting edge. Because the cutting edge girls don’t work for free and we all think you’re kind of f**king lame. Like you guys are lame and like jealous, and just like sneaky and weird. And you never execute well. You’re just not cool. Just pageant girls.

We think this Metro UK article is also one of the things that set Azealia off.

In the piece, they claim that a source close to Beyonce said Beyonce was inspired by and listened to artists within the house genre, which included early Azealia Banks music, and artists like MNEK.

“She loves the fact that so many #Black writers and DJs are thriving in the dance scene over there and was paying attention to songs by people like MistaJam, David Asante, MNEK, Kamille and early Azealia Banks when brainstorming.”

“She also wanted to honour artists like Brenda Fassie so there will be references to South African pop music all across the album. Some of her music videos will touch on 90s supermodel glamour and she’s planning to work with some Brits on her new videos and performances.”

Even though people think this is one way to give Azealia her flowers, many find it odd, that she thinks she owns the genre.

Azealia Banks was really ahead of her time it seems pic.twitter.com/MpQ41nkEkG

Not Azealia Banks acting like she invented house music and dance music and falsely accusing Beyoncé of trying to erase her contributions to house music. The delusion is too real. That Metro UK article is not even accurate. We don't know who the "insider" is that spoke to them.

break my soul is great but no one will ever top azealia banks in house music not even beyonce.

oh by the way, azealia banks isn’t just a rapper…she is an INCREDIBLE singer too. that woman can sing and rap in one song and it would sound AMAZING. pic.twitter.com/26kOBFTKAD

Azealia Banks could teach Drake a thing or two about Rapping and Singing on a House Beat pic.twitter.com/6wiV7Nmm1R