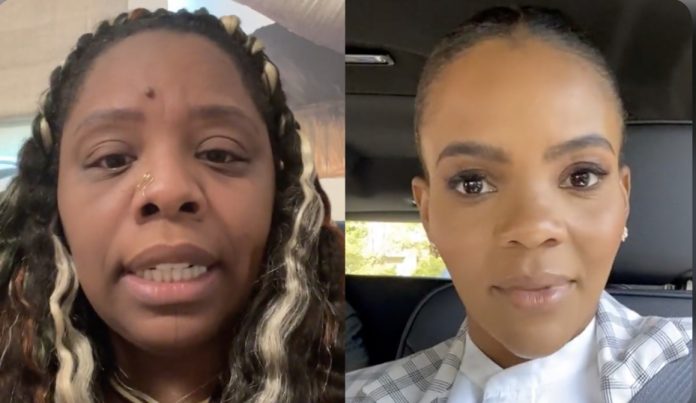 Candace Owens is determined to expose BLM and Patrisse Cullors specifically who she is accusing of using money donated to the Foundation for her own personal gain.

According to LA Mag, on Saturday, Owens arrived at the Topanga Canyon home of Patrisse Cullors, film crew in tow, and asked to speak to someone—presumably regarding the allegations that BLM funds were used to buy million-dollar homes over the last five years.

Owens, 33, has said that she is working on a documentary looking at the funding of the movement, which caught fire in 2014 and saw a massive influx of donations in 2020.

That year, Cullors, 38, went on a so-called “real estate binge” which is now leading to heightened scrutiny.

Patrice Cullors jumped on IG live telling her followers about Candace’s visit calling it ‘harassment’ saying Candace demanded that she come outside.

“This morning I woke up to Candace Owens being outside of my house with a news crew.

She was demanding that I come outside… she was actually asking about the Black Lives Matter Global Network Foundation property,” Cullors said on Instagram on Saturday, referring to a property in Studio City.

“It seems like she thought my house was that. It’s unacceptable and it’s dangerous for anybody, any stranger, to come outside of my house.”

Tearing up, Cullors then pleaded for the safety of her family and called out attacks by the right-wing media.

“They are purposefully building a wedge between Black people because they know that when we are together, we’re stronger, and they’ve seen what we’ve done this last decade,” she said.

Almost instantly, Owens responded with her own Instagram Live session, wherein she indicated that she believed she had arrived at the BLM property that day (and not Cullors’s personal home), insisted that she simply sought to ask questions (“very politely, by the way”) but that a white security guard denied her access.

“Patrisse is pretending to be scared because she knows that this Black Lives Matter lie is falling apart. And she doesn’t know what to do,” Owens said to the camera.

“What you are seeing right now is the face of a woman who is pretending she’s afraid of right-wing pundits when in reality, she’s being exposed as a fraud… took millions of dollars to fund herself, to fund her lifestyle, to fund her girlfriend and to buy million-dollar mansions in neighborhoods where no Black people live.”

She said on Twitter:
Patrisse Cullors of BLM just did a LIVE on Insta, crying, bc I showed up to her many million dollar mansions in LA seeking comment. Claims she is unsafe😂

I’m very pregnant but have been shooting this documentary for months. BLM is about to be exposed!

Then she pre released the footage from the encounter:

BREAKING! I am pre-releasing the footage of me showing up at one of Black Lives Matter founder’s, Patrisse Cullors, multiple mansions.
Remember she fake cried and said I harassed her?
LIAR.
I kindly spoke to a white security guard (who remained silent) through a gate: pic.twitter.com/keM6nxXv6b

And we all know where she got the money from.

We reported a few days ago that Patrisse Cullors admitted to the Associated Press that she lied when she said she only uses the group’s $6million LA mansion for official business.

She told AP Monday that she used the opulent seven-bed Studio City compound – purchased in cash by BLM in October 2020 – for her own recreation twice.

The first instance saw her hold a party to toast Joe Biden and Kamala Harris’s inauguration as president and vice president in January 2021.

Then, in March the same year, she commandeered the luxury property – whose purchase has sparked fury among other racial justice campaigners – for her school-aged son’s birthday party.

Patrisse Cullors of Black Lives Matter admits she lied: mansion she bought with BLM money was used for her son’s bday party, and a Biden inauguration party.

And she employs her brother and mother to “work” there.😂

I accept your apology, Black America!

Patrisse Cullors of Black Lives Matter admits she lied: mansion she bought with BLM money was used for her son’s bday party, and a Biden inauguration party.

And she employs her brother and mother to “work” there.😂