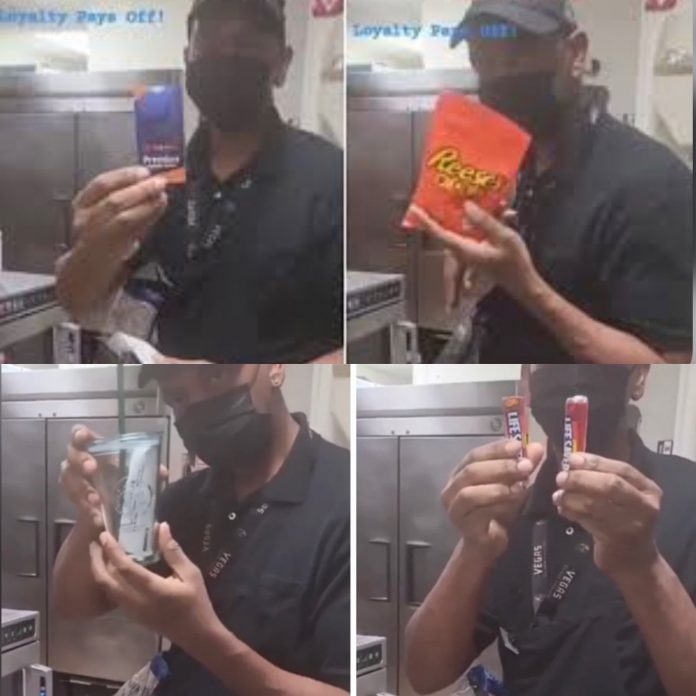 By now you have probably seen the viral video of a Burger King employee who received a trifling party favor bag for 27 loyal years of service to the company.

54 yr old Kevin Ford works as a cook/cashier at the Burger King at Las Vegas airport and as he described what was in the bag it made us all sad.

In the video now shared millions of times, he shared everything he received, including candy, a few pens, movie tickets, a Starbucks cup, and a few other nick-knacks.

A spokesperson from BK released the following statement:

The Burger King brand and its many franchisees nationwide are committed to recognizing and celebrating the achievements of the thousands of people serving across a wide range of roles — all dedicated to providing our Guests a world-class experience.

Following review with this location’s franchisee, we’ve learned that this video depicts a Team Member in receipt of a peer-to-peer reward in recognition of a short-term positive performance/experience.

The franchisee offers its Team Members a robust employee recognition program, which includes the recognition of tenure milestones and monetary awards.

Kevin appeared on Instagram with Entrepreneur Sierra Nicole and his daughter where she collected $2700 for Kevin, $100 for each year he put in.

Hi, My name is Seryna. The man in that video is my father. He has worked at his job for 27 years and yes he has never missed a day of work.

He originally began working at this job as a single father when he gain custody of me and my older sister 27 years ago.

Then as our family grew and he remarried, he continue to work here because of the amazing health insurance That was provided through this employer because it was unionized.

Which got all four of his daughters through high school and college with full healthcare coverage. My dad continues to work here, because though he does look young, he is coming up on retirement age and leaving would cost him his retirement.

In no way are we asking for money or is he expecting any money but if anyone feels like blessing him he would love to visit his grandchildren.

That Burger King employee who got a bag of candy and a Starbucks cup for his 27 NEVER MISSED A DAY OFF WORK years of service goes to show that these major companies do not care 🙂.

40+ year old man spending 27 years at Burger King and getting the same reward as a kindergartner that aced a spelling bee in class is insanely depressing man https://t.co/x9bmiWFnN5

Burger King needs they ass beat for gifting that man a bag of bullshit for 27 years of service. That’s why I say fuck these jobs & move company to company & get ur money

One thing about me! I’ll do the math!

*when googled, Burger King was making 2.3 billion in revenue*

If they divided half of the revenue up equally to all employees just as a bonus, you looking at $57,500 bonus.

@BurgerKing that video of you giving your employee childish rewards after 27 hard years of work is ashame. I hope that gentleman takes his hard work somewhere else.