Inside Their Nigerian Ceremony

Congratulations to Simon Guobadia And Porsha Williams who have officially tied the knot in Atlanta.

According to an exclusive with People, on Friday, the Real Housewives of Atlanta alum, 41, and the Nigerian-born businessman, 57, wed in a Nigerian traditional native law and custom ceremony at the Four Seasons Hotel Atlanta in front of 250 guests. The couple will tie the knot again in an American ceremony on Saturday.

“I am ridiculously excited,” Williams told PEOPLE ahead of the nuptials. “I am just so ready. I’m not even nervous. I mean, I know I’m marrying the love of my life, and it’s just going to solidify our relationship and our family bond. I’m calm and excited.”

Guobadia, meanwhile, said he’s a “little nervous” — but not for the reason one may think.

“When you say you’re a little nervous, and you’re about to walk down the aisle, people are thinking, ‘Uh-oh,'” he said. “But my nervousness comes from the family members and friends who I haven’t seen in a long time coming into Atlanta!”

The only thing Williams said she’s “anxious” about when it comes to their wedding is the seven wardrobe changes she’ll be making over the course of the two days.

“It’s going to be a true fashion extravaganza,” she said with a laugh. “I just couldn’t turn any dresses down! If a wedding dress came my way, and I loved it, I got it.”

On the day of the Nigerian wedding, Williams had three outfit changes. For the ceremony, she wore a red gown by designer Lakimmy customary for an Edo bride (Guobadia is from Benin City in the Edo State of Nigeria). She also wore an okuku, a headpiece with Benin coral beads.

Later, she changed into two gowns by the designer Tabik: one in royal blue and one in gold.

Guests were also asked to follow suit by wearing traditional or formal Nigerian-inspired attire in the colors of the day: purple and teal.

Typically, Nigerian Yoruba and Edo cultural attire for women includes iro and buba, a vibrant skirt and top that is usually heavily beaded. Women often accessorize with a gele (an ornate head wrap) and by carrying a fan. Men, meanwhile, wear an agbada, an oversized kaftan designed from guinea or lace, and a hat made of asoke fabric. 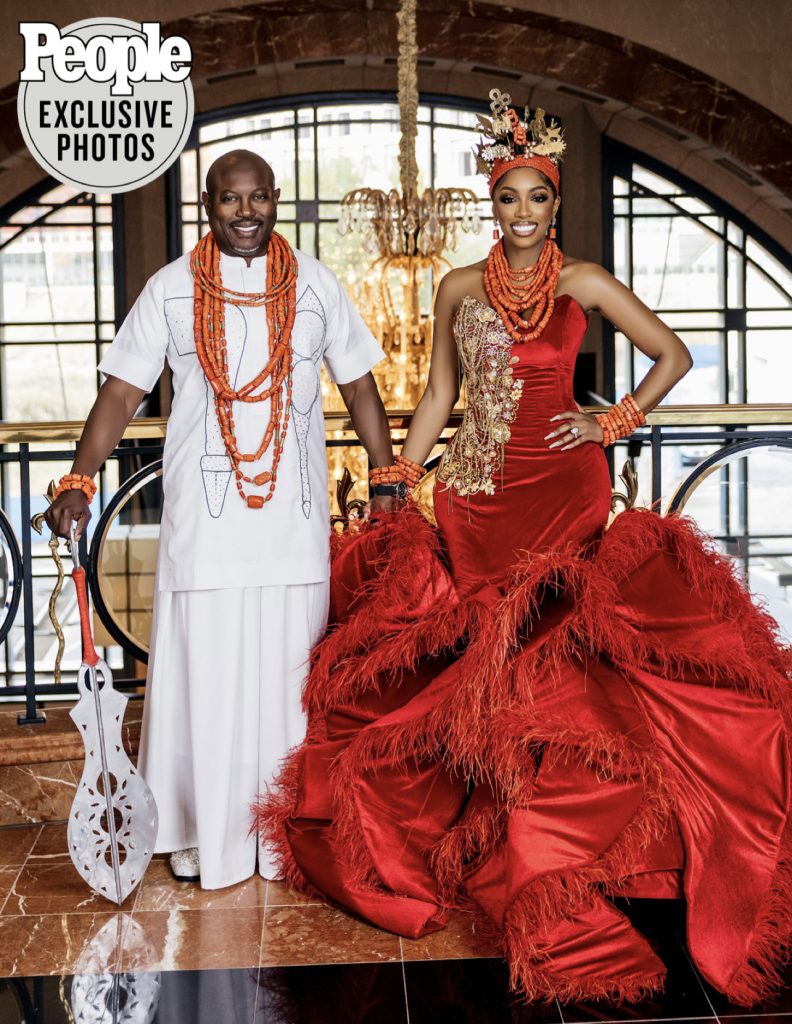 Following tradition, the couple provided the cultural fabric to make their family members’ clothing for the day. With the fabric, each family member could choose how they wanted to design it.

“It was a huge undertaking,” Williams said. “I personally chose the fabrics that they’re going to be wearing, including their head wrap, their gele. I chose all of the colors, everything. I should be a stylist after this!”

Throughout the native law and custom ceremony, which was led by a spokesperson from each side of the couple’s family, traditional Benin singers and dancers performed. Then, at the reception, Williams said she wanted her guests to feel like they were in Nigeria.

“I want them to feel like they have taken a flight and landed in Benin,” she said. “The whole room should be transformed with beautiful colors of browns and rose golds and tans and creams. It should be really, really beautiful and give you that authentic African feel.”

“The other thing I wanted was trees in the room,” she added. “I want it to feel like an inside/outside space, but luxurious.”

For the feast, the couple catered traditional Benin foods like snails, egusi, meat pies and okra stew from the local restaurant Little Lagos. To represent Williams’ southern roots, they also had fried lobster, steak and cornbread. As for the cake, they had a traditional Benin cake.

Ever since they announced their engagement in May 2021 after one month of dating, Williams said she “knew” she wanted “to honor” Guobadia’s culture at their wedding

“I looked up different things about an Edo bride, about the Benin culture, about their ceremonies, just so that I would not be totally green,” she said. “I wanted to make sure that I was as respectful as possible because I didn’t want to not do anything that wasn’t within tradition, within their culture. So I had to be very, very serious, and I was very adamant that each detail was going to be authentic to their culture. I learned a lot.”

Guobadia said it all came naturally to Williams.

“For starters, I was so excited and, quite frankly, surprised that she wanted to do the traditional way, because it’s not something you hear every day,” he said. “To embrace my culture and want to be married in that fashion is something that blows my mind. I think some of the folks we brought on to help us go through the whole ceremony and that whole process were surprised that she knew so much already about the outfits, the clothing, the names and all of that. She’s immersed herself in the culture, I’d say in the last year.”

During a trip to his hometown of Benin in October, Guobadia said Williams really “embraced” Nigeria. “If you didn’t know any better, you could’ve sworn she’d been to Nigeria a few times,” he said.

When the couple returned home from the trip, Williams did an ancestry DNA test and was surprised to discover that she’s 44 percent Nigerian, specifically from the western part of the country, where Guobadia’s mom is from.

“The journey has been phenomenal,” Guobadia said. “I couldn’t have asked for a better future wife.”

For the duration of the celebration of their love on Friday, the couple asked for guests to go unplugged.

“It’s important for me because I’ve had another big event in my life before, and all I remember seeing was flashing lights and pictures being taken every single minute,” said Williams, who was previously married. “I just really want people to be in the moment. This guest list, everyone there was handpicked by the both of us. These are people that we care about, people that we love, people who have supported us. We really want them to feel the energy and for us to celebrate our love together.”

Williams added that Guobadia has people coming in for the wedding from “London, Nigeria, South America … everywhere!”

Since their wedding is a two-day affair, Williams said that not spending the night together two nights in a row is going to be tricky.

“On Thursday night, I’ll be going to the Four Seasons to the penthouse suite to prepare for the next day since it’s a morning wedding,” she said. “But on Friday night, I’m going to be back at our home because I’m going to be getting ready here for the American wedding that day. He’s like, ‘Wait a minute, you’re going to tell me I can’t be in the bed?’ I’m going to have to try to make him sleep on the sofa.”

On Saturday evening, the couple will begin their American wedding ceremony at a church in Atlanta with 350 guests. Afterwards, they’ll celebrate with a ball and after party.

As to what she’s most excited for about married life, Williams said it’s getting to officially call Guobadia her “husband.”

For Guobadia, he said he and Williams are already “best friends.”

“I literally don’t want to leave this house most days after work, because I’d much rather climb into bed and watch TV with her,” he said. “We enjoy traveling a great deal. We love finding new spots around the world and just going together. We’re just both at a very peaceful place in our lives.”

“In the year and a half I’ve been with this woman, I’ve not had one issue with her,” he said. “It’s just been a great relationship. As a matter of fact, the whole idea of getting married is really not something that scares me because we’ve lived together, and our families are intertwined. So this is just a legal, formal way of saying we are married. We could have celebrated from day one.”

The couple is also excited to bring their families even closer together. (Williams shares daughter Pilar Jhena, 3, with ex Dennis McKinley, while Guobadia has five kids — Quentin, Nicole, Christian, Benjamin and Ximena — from previous marriages.)

“I’ll be his kid’s stepmom, he’ll be Pilar’s stepdad,” Williams said. “We’re really a unit, and we move together. The way we move throughout life will be as husband and wife as one. It really is a big deal to the both of us.”

“I’ve always wanted to have four kids, so it’s a blessing that he has three younger ones that are at home a lot of the time, and then I have my Pilar,” she said. “But as far as me being able to experience having a child with him, I definitely want to explore that. I’m not sure how many that will include, but I definitely know it wouldn’t be more than two.”