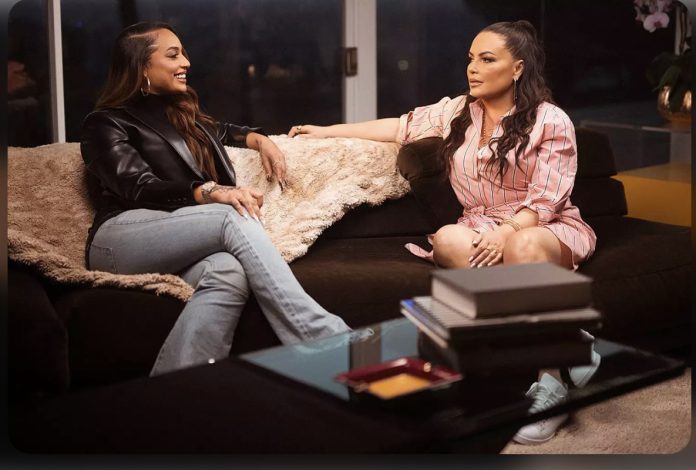 In a recent interview with Angie Martinez Dani Leigh opened up about the “triggering’ IG live fight she had with Da Baby and her so called ‘side chick’ status.

The interview premiered exclusively with People as she geared up for the release of her single “Dead to Me” on Tuesday.

According to People she reflected on the Instagram Live she had with ex-boyfriend DaBaby — with whom she shares her 8-month-old daughter — in November, she describes it as a “very bad time” in her life.

“It was very triggering, very sad,” the singer, 27, says. “I wish it didn’t happen because I don’t want my baby to see that later on in life.”

She continued, “But she’ll grow to be her own person and to be able to take things in.”

When asked how she’ll explain the video to her daughter, in the future — DaniLeigh (real name Danielle Leigh Curiel) says it “depends on the type of person she grows up to be.”

“The only responsibility I have is to raise her to be a strong woman. She’ll feel how she feels, she’s her own person,” she says of her daughter, whose name is yet to be revealed.

In the since-deleted online video, DaBaby, 30, and DaniLeigh were shown having a heated argument as DaniLeigh nursed their newborn baby girl.

At the time, the singer was charged with two counts of assault, according to Rolling Stone and TMZ.

Later in the interview, DaniLeigh admits it was “very selfish” to get into that fight and that he has not apologized since. “He’s like that though,” she says.

She’s now navigating their relationship as co-parents, and says she likes that it’s a “challenge on her maturity.”

“I’ve learned to love myself so much more,” she says. “Because I feel like I really did love him so much that I was just giving it all to him … I didn’t even focus on my career.”

Dani also gave some insight into her relationship with DaBaby.

Saying it was on and off for about three years and they were very much in love making it clear she was never a side piece.

“It was good and then of course he had his little mess ups and stuff and we’d break up for a month and get back together and then again we’d break up… we broke up a lot.

But during that time, I definitely was not his side piece and he knows that too.

But I felt like when I spoke to him, he told me the night before I was doing the most when it comes to crying and stuff, you know, how I felt.

And I guess he said what he said out of anger and tried to make me look bad I guess, I do not know. ”

Dani went on to say that despite not receiving an apology from the rapper, the two are navigating their relationship as co-parents to their baby girl Velor.

Watch the interview below:

Since the interview and Dani’s song ‘Dead to Me’ dropped, Meme…. DaBaby’s other baby mama, shared her thoughts on the whole thing.