Have you ever heard of Christina Jenkins? On Instagram, I saw a post celebrating her legacy as the African American stylist who invented the sew-in weave technique.

According to Black America Web – Christina Mae Jenkins was born Christmas Day in 1920, although there are conflicting dates regarding her day of birth we know that she was born in Louisiana and that she graduated from Leland College near Baton Rouge.

Christina graduated with a degree in science in 1943. (There isn’t a ton of information about her early life)

Christina Jenkins worked with a wig-making company where she figured out an alternative way of attaching hair without the use of chemicals or heat because back then (and even now) wigs would always fall off the customers. 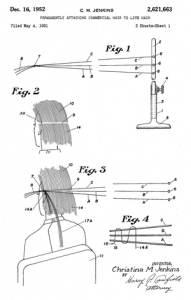 Christina came up with the idea of attaching the hair to a net and then sew the hair unto the client’s head using cornrows as a base. She called the technique the ‘Hairweeve”.

She then moved to Malvern, Ohio, and began studying how sewing in commercial hair with a person’s natural hair added length and body.

Jenkins owned and operated her Christina’s HairWeeve Penthouse Salon in the Shaker Heights section of Cleveland until 1993.

Did you know? Pt:2 Jenkins owned and operated her Christina’s HairWeeve Penthouse Salon in the Shaker Heights section of Cleveland until 1993. She also taught her hair weaving techniques at hair shows across Europe. Jenkins was married to jazz pianist Herman “Duke” Jenkins and raised one daughter together, Ms. Shelia Jenkins-Cochran.There is some dispute over Jenkins’ claim to the hair weave as some historians stated that the technique was used in a similar fashion dating back to ancient Egypt.The late Ohio U.S. Congresswoman Stephanie Tubbs Jones commended Jenkins for her invention and praised her for her “revolutionary contribution”. . . . . . . . . . . . . . . . . . . . . . . . #hair #hairweave #hairstyles #fashion #inventor #blackinventors #history #blackhistory #blackwomen #sewinhair #art #creative #style #didyouknow #christinajenkins #blackhair #blackculture #entrepreneur

She also taught her hair weaving techniques at hair shows across Europe. Jenkins was married to jazz pianist Herman “Duke” Jenkins and raised one daughter together, Ms. Shelia Jenkins-Cochran.

In 1951, Jenkins filed a patent for her “HairWeev” technique, which was granted in 1952. The Patent specifically described the technique as – ‘Permanently attaching commercial hair to live hair’.

‘Interweaving strands of live hair and strands of commercial hair, with cord-like material to permanently join the strands thereto…’

Even though Jenkins was granted the patent in 1952 it was challenged through litigation and overturned in 1965.

There is some dispute over Jenkins’ claim to the hair weave as some historians stated that the technique was used in a similar fashion dating back to ancient Egypt.

When Christina Jenkins died at the age of 82 in 2003, the late Ohio US Congresswoman Stephanie Tubbs Jones commended Jenkins for her invention, calling her “a pioneer in the

field of cosmetology” and her invention of the hair weave a “revolutionary contribution” that has “helped to boost the self-esteem of men and women across the world”. [via Stylist.co.uk]

In the mid 1900s, wigs were one of the popular methods for a dramatic change in hairstyle, texture, length, or color without any of the damage. A Louisiana-based hairdresser by the name of Christina Jenkins was researching ways to secure a wig to the hair and scalp while working for a wig manufacturer. This expertise was used to her advantage–Jenkins created a new technique the hair weaving process; the purpose was to create hairstyles that lasted longer and for women to add any desired thickness. Jenkins ability to secure hairpieces safely and securely without damaging the hair afforded her the opportunity to travel abroad to teach others. In 1951, Christina Jenkins received a patent for her hair sew-in weaving technique. Today the business of making and selling weave is a worldwide sensation–we see literally thousands of mass and independent weave retailers selling various grades of quality from different countries around the world. Black women, in particular, spend an estimated $7.5 billion annually on beauty products, shelling out 80% more on cosmetics and twice as much on skin care as their non-Black counterparts. Yet, they’ve been grossly underserved by the cosmetics industry throughout history. #blacklivesmatter #black #myblackisbeautiful #blackhair #sewin #christinajenkins

Like with every other invention, weaves have come a long way, we have redesigned and improved on the technique over the years but the next time you do an install keep Christina Jenkins in mind!