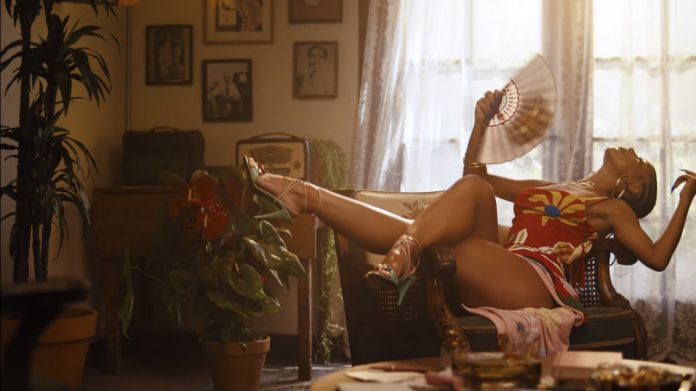 Doja Cat released the visuals for her hit single “Vegas” and it is a masterpiece.

Vegas is inspired by Elvis’s ‘Hound Dog’ but we couldn’t help but appreciate how Doja’s visuals paid homage to the true origin of the song, Hound Dog by Big Mama Thornton 1952.

According to Billboard, We’re just three weeks away from the release of the highly anticipated Baz Luhrmann Elvis biopic, and Doja Cat raised the hype on Friday (June 3) with the release of her flashy “Vegas” music video.

Doja debuted the single during her Coachella performances in April, and brought out gospel singer Shonka Dukureh — who plays Thornton in the film — for the sets.

The comments sang her praises:

The vocals, gorgeous melanated people, and the rawness of the true origin of “hound-dog” by Big Mama Thornton! This made my Black Day ❤️✊🏾 Doja is establishing her legacy!

Another masterpiece! I love the mood and colours, really beautiful visuals. The concept is simpler than her recent videos but the way Doja dances and moves really elevates everything, she is a brilliant performer. I truly think she will be remembered like Michael Jackson and Beyoncé in the future. Everything she puts out is creative and immaculately executed.

She’s literally the most talented artist out there. I’m so glad to be living in the same era as her!

Doja Cat did what she had to do with the “Vegas” music video. It’s hard to believe this is a SOUNDTRACK song. The song. The Video. like? Doja Cat is THE MOMENT. She’s so fucking badass. if you sleeping on her still, wake the fuck up. She is absolutely sickening.

no but doja cat's music video for vegas was really giving black empowerment,love a black woman from infinity to infinity like what can i say?

Vegas by Doja cat is so good

What do you think about the video? Comment below!

Normani Critisized For Working With Chris Brown In His Latest Music Video – “why would normani do this to her own career?”