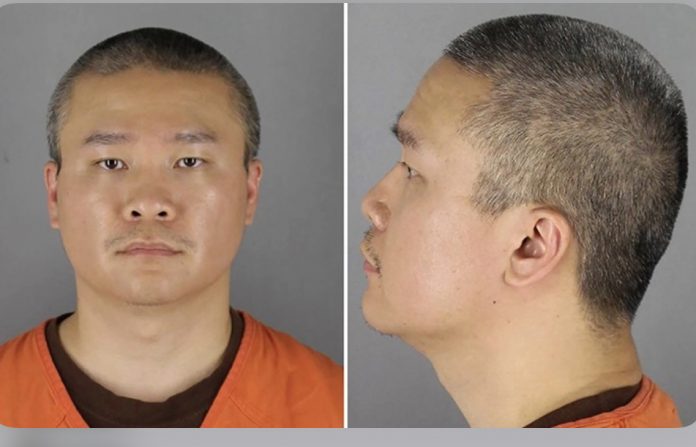 Thao took the stand and said it was not his job to identify whether George Floyd was in medical distress because his job was ‘crowd control’.

He also said he ‘had no idea’ Floyd needed medical attention until after he was taken away from the scene in an ambulance.

According to Revolt while Chauvin pinned Floyd, who was handcuffed, to the ground with help from two other officers J. Alexander Kueng and Thomas Lane while Thao controlled the crowd of increasingly concerned bystanders.

During his testimony, Thao claimed it was not his job to identify whether Floyd was in medical distress because he was on “full-time crowd control.”

However, under Minneapolis Police Department policy, officers are required to intervene during instances of excessive force and render medical aid when necessary.

Videos filmed during Floyd’s fatal arrest showed that none of the four officers performed CPR on him before paramedics arrived.

On Tuesday, Thao testified that he “had no idea” Floyd was in medical distress until after he was taken away in an ambulance.

Thao also revealed that he and Chauvin were called off the initial 911 call about Floyd allegedly using a fake $20 bill, but they responded to the scene anyway.

Thao, Kueng and Lane are all charged with violating Floyd’s constitutional rights to be free from unreasonable seizure and unreasonable force by a police officer.

Kueng and Thao are also charged with violating Floyd’s right to be free from unreasonable seizure since they did not stop Chauvin from kneeling on his neck.

Lane was not named in the complaint as he expressed concern for Floyd’s wellbeing during the arrest.

Chauvin has already pleaded guilty to the federal charges and faces up to 25 years in prison, which he would likely serve concurrently with his 22 1/2-year prison sentence for Floyd’s murder.

According to The Washington Post; Thao, Kueng and Lane are all expected to testify in their own defense during the trial.

Darnella Frazier, who filmed Floyd’s fatal arrest, will also appear as a witness.