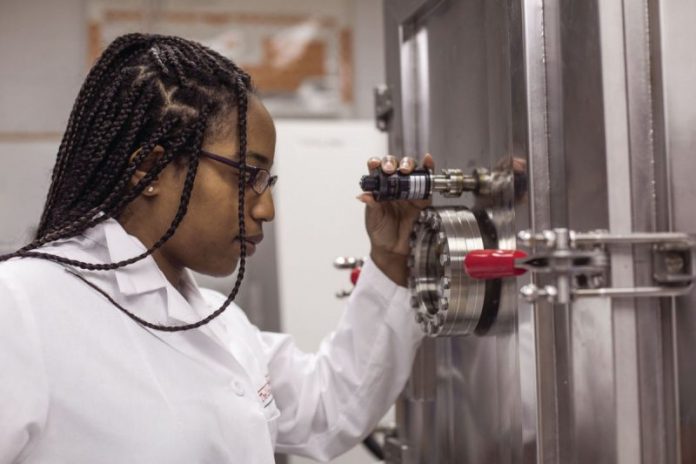 First Black Woman PhD physics from the University of Georgia.

According to The Atlanta Black Star:

Whitney Ingram will make history as the first Black woman ever to graduate from The University of Georgia with a doctorate in physics. The 27-year-old student, who also attended the college for her bacholor’s in physics, will earn her degree this December.

According to On Common Ground News, Ingram’s mother urged her to contact her school’s office of outreach and diversity to confirm her distinction. The student admits she initially didn’t believe she was the first African-American woman to obtain a physics Ph.D.

As a matter of fact Whitney has been described as overly modest, she says ‘I’m an Anomaly, but Don’t Want to Be’.

“I think I was thinking too small and making it much smaller than it was, but I’m just doing what I love,” Ingram told OCG News.

The soon to be graduate’s interest in science started as early as elementary school:

I read a National Geographic article about the sun exploding and engulfing the Earth. Though that event was at least another billion years away, that did terrify me a lot,” she said.

What she said about being the first black woman to do this in her feild:

“Being Black is one thing. But women and even Americans are minorities in the field of physics,” she told the website. “I’m basically an anomaly. I’m the first, but I don’t want to be the last.

Now that I think about it, I don’t see any black females coming up under me and none of my teachers were Black or even American. I want females to be inspired to do this. “I’m honored to be the first at UGA and I’m so happy that I can reach and inspire others,” she said.

Ingram’s dream position is with the Department of Defense and she eventually hopes to teach physics at the college level. Way to go Whitney! Have an awesome graduation!