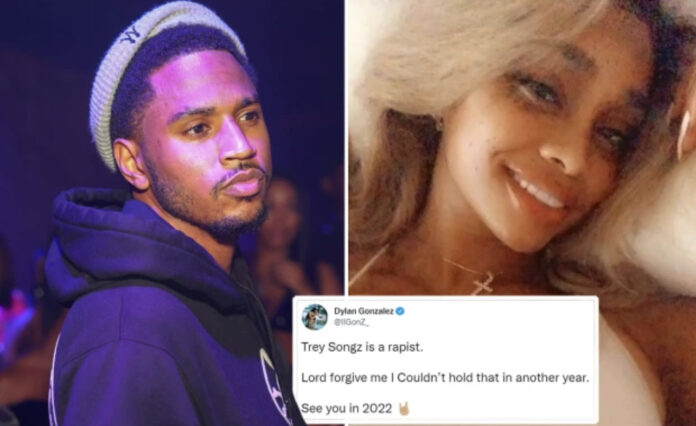 And said she “couldn’t hold it in another year.”

Trey Songz is a rapist.

Lord forgive me I Couldn’t hold that in another year.

As shocking as Dylan’s tweet is, it comes as no surprise.

According to The Sun Trey has been accused of violence against women before.

Earlier in December 2021, a woman named Jauhara Jeffries accused Trey of assaulting her at a Miami nightclub on New Year’s Day in 2018.

As reported by NBC News, Jauhara claimed that she met the rapper while attending a New Year’s Eve party hosted at Diddy’s home on Star Island.

She claimed to party for two hours before heading to E11EVEN nightclub in Miami with friends.

Trey, whose real name is Tremaine Aldon Neverson, allegedly left Diddy’s home at the same time when he was invited to go to the club with Jauhara.

After leaving the club, the group got back into Trey’s vehicle and the rapper allegedly took his shirt, while Jauhara began recording him in fear that he would hurt her.

The suit said that Trey tried to grab the phone from her and that he “instructed his driver to stop the vehicle in order to forcibly remove plaintiff from the vehicle” when she refused to hand over her phone.

The driver then “grabbed plaintiff and violently pulled her out of the vehicle, while defendant Songz pushed her, and threw her onto the street.”

According to the lawsuit, Trey appeared inebriated and accused Diddy of hosting a party where the 37-year-old was served alcohol to the point of intoxication.

After Trey allegedly invited Jauhara and her friends to join him at a private table at the club, the lawsuit claimed that he sexually violated her as she danced on a couch.

Additionally, the suit accused Trey of pulling his hand away when the victim turned around.

In November 2021, police confirmed they were investigating sexual assault allegations against the R&B artist at a Las Vegas Strip hotel.

The actor was said to be cooperating with the investigation and no arrests have yet been made.

Back in 2017, actress Keke Palmer accused the rapper of allegedly putting her in his music video for Pick Up The Phone without her knowledge.

Keke wrote: “This is preposterous. How am I in this video Trey?”

“After you found me in a closet HIDING because I was so afraid of any more conflict.

“Literally my last option was to hide because you all would not listen when I said I did not want to be in the video the FIRST time.”

The Scream Queens alum continued to make claims by accusing Trey of attempting to persuade her to appear in the video with numerous tactics.

She wrote at the time: “Just cause you give someone food and alcohol and throw in a little sexual intimidation doesn’t mean they will buckle.

“Yet, you still disrespected me as a young women, whom you’ve known since she was TWELVE.

“YOU STILL, defied my wishes and in turn showed your lack of respect for a brand that took me fourteen years to build and put me in the video against my wishes.

“Come on bruh, I clearly said no and you said okay, yet I was being secretly filmed when you told me ‘let me just show you the idea’?? Wow.”

Keke continued: “This is the sexism and misogyny I refer to because if I was a dude, he wouldn’t have even tried me like this.

“I’m serious about my business and you will not use my likeness without MY permission.

Following her claims, Trey’s music video for Pick Up The Phone- which features Fabolous and his artist MIKExANGEL- was removed from the internet.

You are not the one that needs forgiveness that man gets outed every 3-6 months. He needs to be locked away. https://t.co/LYlTsthKBS

Multiple women have made allegations against this man… and it’s always so wild to me how we all always know women who experience rape and yet we never know any rapists… but what I find most vile is certain replies. https://t.co/4dlmBp2uXt

Yet another allegation that will be swept under the rug despite him having SEVERAL, this is crazy. https://t.co/pSPGljNpuQ