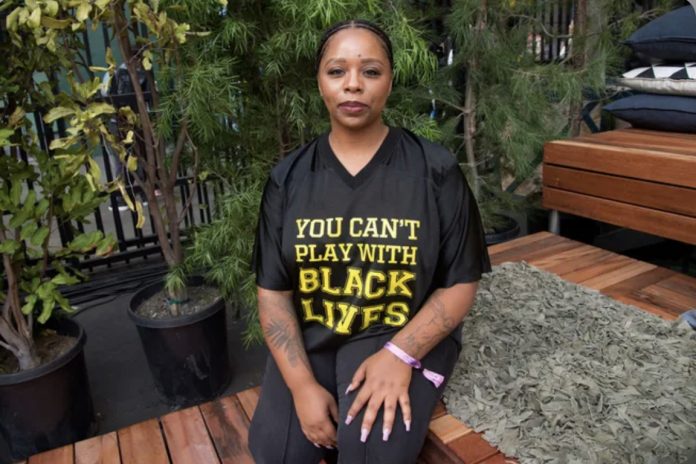 Patrisse Cullors is now admitting that she lied when she said she only uses the group’s $6million LA mansion for official business.

According to The Daily Mail Cullors, 38, told the Associated Press Monday that she used the opulent seven-bed Studio City compound – purchased in cash by BLM in October 2020 – for her own recreation twice.

The first instance saw her hold a party to toast Joe Biden and Kamala Harris’s inauguration as president and vice president in January 2021.

Then, in March the same year, she commandeered the luxury property – whose purchase has sparked fury among other racial justice campaigners – for her school-aged son’s birthday party. 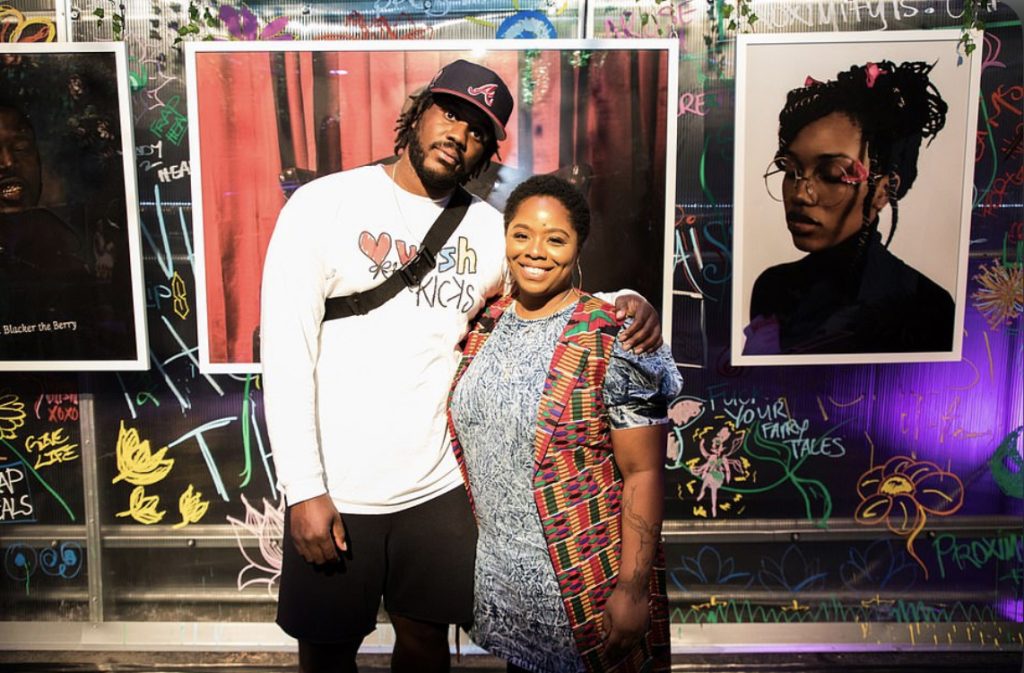 Cullors said of her earlier decision to lie: ‘I look back at that and think, that probably wasn’t the best idea.’

She previously issued a statement denying that she’d ever lived there or used the property for her personal gain after its purchase was revealed by New York magazine, triggering allegations of racism from BLM. 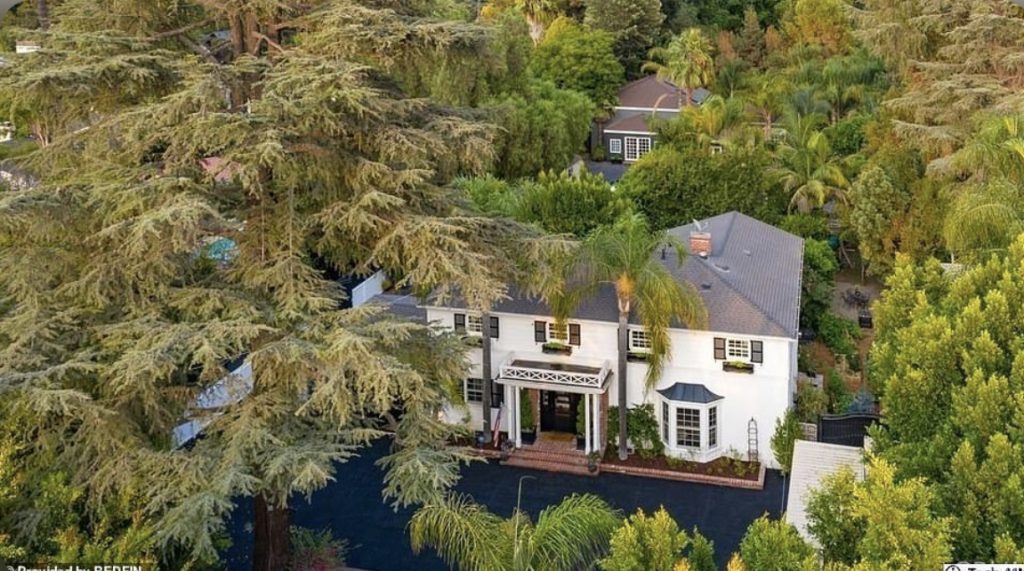 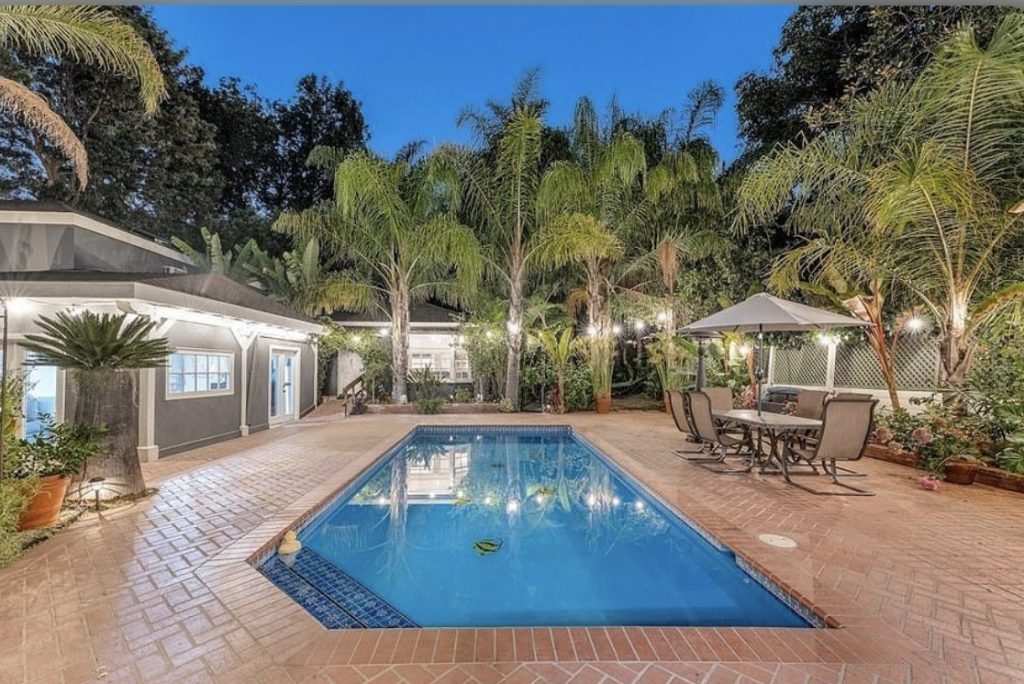 The purchase of the 6,500 square-foot Studio City property – which officials previously said was reserved exclusively for official foundation business – was disclosed last month by NY Mag.

News of the previously under-wraps transaction – made more than a year and a half ago – triggered a firestorm of criticism concerning the financial practices of the foundation’s top brass, which have already come into question in recent months.

Black Lives Matter raised $90million in the wake of George Floyd’s murder, and still has an impressive $60million of cash at hand.

Explaining the reason behind the luxurious purchase, Cullors told AP: ‘We looked at commercial buildings and we looked at homes and then we found this really amazing space that’s a sweet spot between commercial and residential.’

She went on to justify its purchase by highlighting how the mansion had a soundstage which enabled BLM to produce podcasts.

After receiving the email asking for comment on the house’s existence last month, BLM officials reportedly circulated an internal memo with possible responses to the outlet’s query concerning the alleged purchase.

The responses ranged from: ‘Can we kill the story?’ to: ‘Our angle – needs to be to deflate ownership of the property,’ the magazine reported.

At the time, Cullors – who attested the property was bought as a ‘safe space’ for black creatives, activists and thought leaders, and that its purchase was never disclosed because it needed renovating – angrily hit back at her detractors, describing criticism she was facing since the purchase was made public as ‘racist and sexist.’

Cullors, meanwhile, defended the purchase while speaking to the AP last week, arguing that the opulent home was bought to bring further value to the BLM empire.

‘We really wanted to make sure that the global network foundation had an asset that wasn’t just financial resources,’ she said, ‘and we understood that not many black-led organizations have property. They don´t own their property.’

Speaking to AP, Cullors said she intended to pay a fee to rent the property for her son’s birthday. Cullors is in a relationship with a woman, and her son’s father is musician Damon Turner.

Black Lives Matter has since confirmed that it had billed her – but it’s unclear how much for, if she was charged the same rate as anyone else, and if she has since settled up the supposed debt.

The company received an $86,000 donation later that year from a nonprofit run by Cullors – on of several transactions that have raised eyebrows amid the recent scrutiny of the group’s finances.

‘The idea that (the foundation) received millions of dollars and then I hid those dollars in my bank account is absolutely false,’ Cullors said, calling those claims ‘a false narrative.’

Cullors said she had been paid $120,000 in consulting fees by BLM, which raked in $90 million in donations in the wake of George Floyd’s murder.

‘It’s impacted me personally and professionally, that people would accuse me of stealing from black people.’
Questioned by AP about what BLM’s donations have been spent on, Cullors continued: ‘No I have never used BLM donations to pay for any of the properties that I’ve owned in the past or owned right now.’

She admitted hiring both her mom and brother to work at the mansion, but denied doing so was corrupt, and said BLM had just been looking for ‘folks’ with ‘skillsets’ to work at the lavish compound.

The former BLM co-founder went on to deny accusations of cronyism for employing both her mom and brother at the BLM compound.

Cullors said: ‘My brother is head of security, mom did work at the property – there’s also dozens of other people doing amazing work.

‘It’s not like I literally was like, I’m bringing all my family and friends in. Folks had skillsets. It’s been a really bizarre experience to know the truth and to have false and misinformation be spread about me, especially around my own personal resources that I worked my ass off to attain.’

Cullors claimed much of the criticism of BLM’s work was rooted in ‘white supremacy,’ and laid bare her woke ambition to abolish the police.

She said: ‘I have the wish for (BLM) to truly abolish the police and prison state.

‘I have the wish for movement leaders and people inside of our movement to be treated with care and dignity and love. I have the wish that black families who’ve been impacted by police violence get everything they deserve.’

Cullors, who resigned from the group last May amid reports she spent millions on a slew of lavish homes with donated dollars, conceded she had had made mistakes and poor decisions when it came to the managing foundation funds.

However, she denied feathering her own property portfolio with the tens of millions of dollars that gushed into Black Lives Matter’s accounts in the wake of George Floyd’s May 2020 murder.

Cullors acknowledged that BLM was ill-prepared to handle a tidal wave of contributions in the aftermath of protests over George Floyd’s death at the hands of Minneapolis police in 2020. She said the foundation was slow to build the necessary groundwork to address the flood of financial contributions.

‘On paper, it looks crazy,’ she said. ‘We use this term in our movement a lot, which is we’re building the plane while flying it. I don’t believe in that anymore.’

She then declared: ‘The only regret I have with BLM is wishing that we could have paused for one to two years, to just not do any work and just focus on the infrastructure.’

Criticism over the foundation’s purchase of the Southern California property and its subsequent secrecy was wide-ranging and fervent last month, even coming from the foundation supporters such as Justin Hansford, the director of the Thurgood Marshall Civil Rights Center at Howard University.

He said the property purchase could be used as fodder by BLM’s already growing number of detractors, which may lead to possible donors shying away from black-led social justice organizations in the future.

Black Lives Matter founder Patrisse Cullors just admitted she lied when she said she only used her $6 million mansion — bought by BLM — for official business.

Will Cullors be arrested for fraud and return the donations used to buy her extravagant home?

Black Lives Matter founder Patrisse Cullors just admitted she lied when she said she only used her $6 million mansion — bought by BLM — for official business.

Will Cullors be arrested for fraud and return the donations used to buy her extravagant home?

Black Lives Matter could be using all that money to address the cause of Black illiteracy.

They’re buying mansions for themselves instead🤷🏾‍♀️

Everybody who gave money to Black Lives Matter should be suing for fraud.