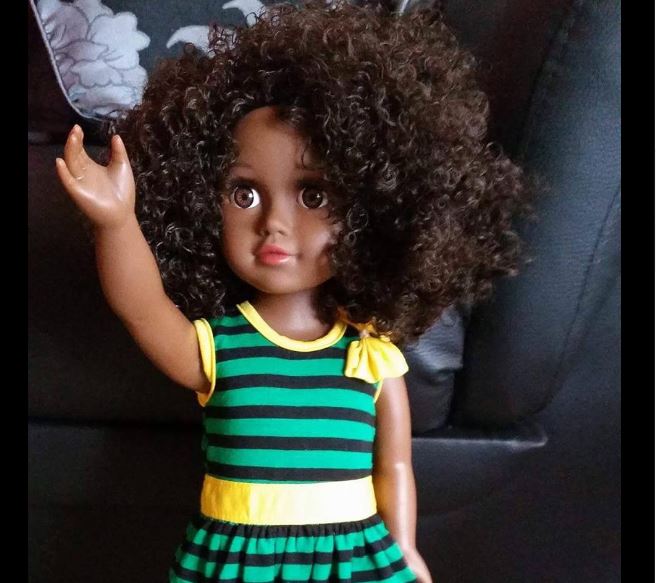 This story is near and dear to my heart because when I was growing up there was no such thing as a Jamaican doll that spoke Patois. You all already know that I am a proud Jamaican, born and raised and when I saw this doll I knew without a doubt I had to track down the story.

According to the Star which is a Jamaican News Paper the first Jamaican Patois-talking doll line was recently launched by a Jamaican teacher living in the United Kingdom.

Saffron Jackson launched the dark skinned curly haired doll in November and since then they have been flying off her shelves.

“People love that it speaks Jamaican. I’ve been getting sales from Australia, Estonia, Amsterdam, Germany, and all these places, which show there is a massive demand for our culture,” the doll’s creator, Saffron Jackson, told THE STAR.

“My phone went off literally non-stop,” Jackson said, adding that she has far exceeded her sales target of 400 dolls during the peak Christmas season, and orders are still rolling in.

When the torso of the doll, called Toya, is squeezed, she utters authentic Jamaica Patois phrases, lauding her culture.

Women’s advocate and gender specialist Nadine Spence told THE STAR that the idea is very relevant as girls of ethnic diversities need representation.

“It sounds exciting. There is a market for it. Especially for those in the diaspora, I think it’s keeping those second-generation young children connected to Jamaica and to their heritage,” Spence said.

Jackson, a 38-year-old Bog Walk, St Catherine, native, explained that she first got the idea to create her own doll after becoming pregnant with her first daughter. She wanted to give her daughter a beautiful black doll that truly represented her, but could not find any.

“All the black dolls I have seen were from America, and most of them were either ugly or not to my liking. I thought, why not create my own doll?,” she said.

The Jamaican Patois-talking doll is the premier product of the Zuree Doll line. According to Jackson, the line produces dolls to represent ethnic diversities.

“The idea behind this is to show little girls that regardless of their skin tone or hair texture, they’re indeed beautiful. Hence, the name Zuree. It come from Swahili, and it means beautiful,” Jackson explained.

Jackson is also developing a clothing line for the dolls, which will be done by a designer in Jamaica.

Other projects in the works include a Zuree Girls book series, the first of which has already been published. In addition, a Rasta-talking bear will also be launched around March.

Those hoping to cop one of the Patois-speaking toys have to fork up £50 (J$7917), which Jackson admits is a bit pricey for the average Jamaican. She said she is working on cutting that price, however, she currently has to outsource manufacturing to China.

Jackson said her aim is to make Zuree Dolls a fixture in all major doll stores worldwide, so that all girls can have beautiful dolls that look just like them.

Check out the video posted on Jackson’s Facebook page:

And ofcourse the homie wyardie had to put his two cents on it:

If you are interested in purchasing your own doll click here! So cute, I cannot wait to get one!

From Mary J. Blige to Issa Rae, Here Are All 17 Black Women On TIME 100 Most Influential People List for 2022

Like Bridgerton? You Will Love These 5 Black Authors of Historical Romance Fiction