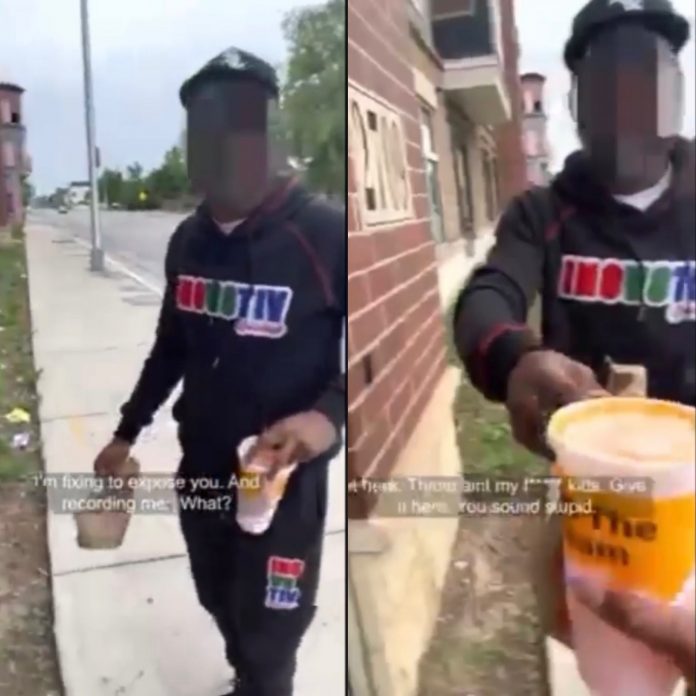 A video of a mom going off on her baby father is going viral because people are debating whether the father is wrong or right.

In the video, the mom says she has one child with the man she is putting on blast.

Her issue is….whenever he comes over with food, he brings only one meal to take care of his son, even though she has three other children (not by him).

She does not think it is fair for him to ignore her other children even though they aren’t his.

She thinks his actions alienate her other kids.

Twitter weighed many of the opinions siding with the guy.

If you can’t match the McDonalds money of one baby daddy for your 3 other kids, just relinquish custody. At least let that kid be happy & fed with they daddy.

Why she can’t go out and get the rest of the kids MCDONALDS is the real question? Since she got morals why can’t she call the other baby daddy to bring their kids some food? She mad at the wrong person.

From the tone of her voice, even she could tell she was on bullshit. She trying to make the active baby daddy be responsible for all the kids.

However, he could’ve just picked him up and went to McDonalds. But, from the looks of it, she wouldn’t have let that happen either. https://t.co/MkA2NSBQBf

That girl really threw that McDonalds on the ground because her baby daddy didn’t get all her kids some food. So all the kids including the one he bought the food for was gonna starve.

and there were others that think he should have considered the other children.

the video of the baby daddy seriously only bring the one child MCDONALDS to the house where he knows its other kids at bothers me. and I think its more soo cause ppl I know are agreeing.
But I have to remember some ppl were raised in BARNS by retards sooo yeahh.

Question…..
Say you're a baby daddy…. And you're split from your baby mama..

Your baby mama ask you to bring your son some McDonalds. She has 3 other kids that are not yours. Will you get them food too or just your son?

What do you think? Is he wrong for just focusing on his son or should he have gone the extra mile for all of the children?