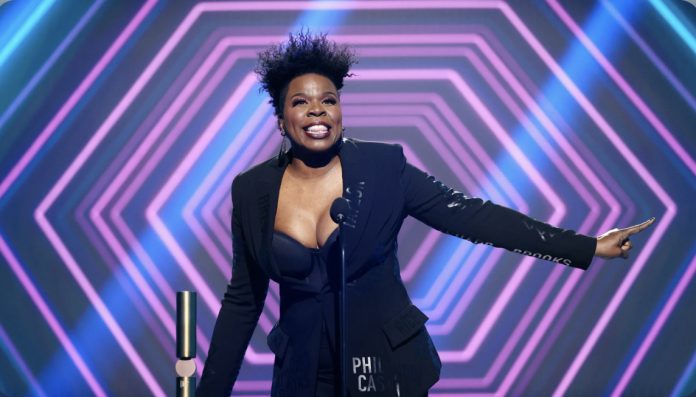 With the Winter 2022 Olympics Games under way Actress and Comedian Leslie Jones, continued her tradition of reacting to the events, and posting her reaction for all of us to enjoy.

Her videos are in our opinion top-tier content but not everyone seems to think so.

The actress took to Twitter saying in part that she will no longer be reacting to Olympic events and that she refuses to stay anywhere she is not wanted.

Then goes on to say:

and then she followed up with:

I have watched olympics since I could walk lol. Me and my dad. So this is from my heart. Y’all should be asking @NBCSports why they don’t see that. And think they can replace me with just anyone. Again not saying I was first just saying it’s frustrating. @TeamUSA pic.twitter.com/uhomVaOuvK

One user reacted to her Tweet by saying, Leslie’s commentary is the reason we even tune in, in the first place.

Doesn’t NBC know that Leslie Jones reacting to the Olympics is the reason why some people even watch the broadcast to begin with https://t.co/EO5nCIzOGy

Another user suggested that NBC should have capitalized on Leslie’s popularity and embraced it instead of putting restrictions on her content.

Leslie Jones’ funny and popular Olympic commentary happened organically as a result of her genuine love of the games. Rather than capitalize on this, NBC/IOC instead copyright strike her posts? This is why network TV is so bad. Nothing but morons calling the shots. https://t.co/tt3pprlvo0

If @peacockTV can have @SnoopDogg and @KevinHart4real do an Olympic commentary show, why aren’t they doing one with Leslie Jones?!?!? Providing top tier content every Olympics!!! https://t.co/viBSoM9yMl

I hate that they did this.
Leslie Jones is a National Treasure. She made me enjoy watching The Olympics through her joyful commentary. I’m legitimately sad. https://t.co/04NJa7BUQ8

Would kill for her to do hockey ? I love her so much https://t.co/6DzZCDis6U

According to People just hours before her post about pushback to her videos, Jones was watching and commenting on the team figure skating event live from home.

“I do this because I really enjoy watching the Olympics,” she said in one clip with Team USA’s Karen Chen was skating. “I really love you guys’ reactions … this is like everybody coming together, no matter what’s going on. … When I’m doing this, my spirit is totally in it. … I do this with real passion.”

In the comment section of that post, Holly Robinson Peete wrote to Jones, “Yeah your commentary is great and you should be doing this on Peacock like snoop and Kev!!!!!!”

Kevin Hart and Snoop Dogg have an Olympic highlights show on NBC’s Peacock.

Responding to Peete, Jones wrote, “You think Kevin and snoop give a f— about athletes and Olympics? Honestly I think this should be my last one. Its frustrating.”