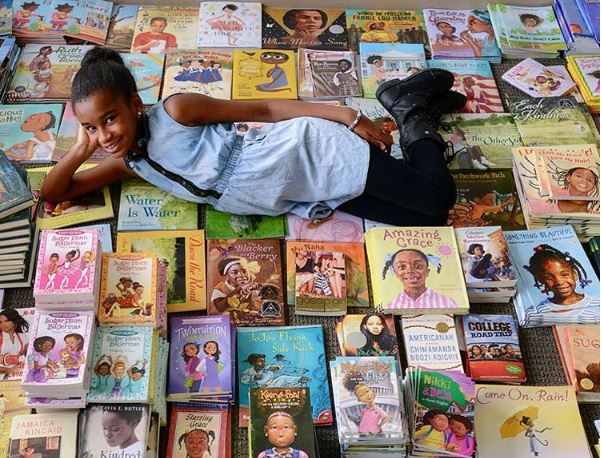 How many books exist with black girls as the main character? This is what 11-year-old Marley Dias sought to find after all the books she was given at school only had white boys and their dogs. It’s what inspired her to start #1000blackgirlbooks.

Dias, who attends St Cloud Elementary in West Orange, New County, complained to her mother about the books she was getting at school. Her mother challenged her to do something about it, and that’s when Dias got the idea for #1000blackgirlbooks.

At first, she was afraid that she wouldn’t reach her goal. However, the hashtag went viral and several months later, Marley has far exceeded her initial goal of 1,000 books with black girls as the main character–she’s gathered over 7,000.

She’s also received thousands of dollars in donations, including $3,000 from author Kelly Johnson and $10,000 from Shutterfly. And it’s not just money. Dias has also appeared on the Ellen Degeneres Show and received books donated by Barnes and Noble.

Dias’s new goal is to form a black girl book club and to influence school districts to include more diversity in the books they assign to students. She also hopes that people and groups will continue to donate books so that she can also donate the books to schools without black main characters.

Dias brought attention to a clear issue in literature. Last year alone, less than 10% of all children’s books released featured a black person as the main protagonist. According to the Cooperative Children’s Book Center, only 84 of 3,500 children’s books were written by African Americans or Africans, and just 180 had African American or African characters. Though this is a larger percentage than in previous decades, most schools still ignore the few books with black protagonists that exist.

Most of us grew up without ever reading a single children’s book with black characters, so #1000blackgirlbooks is crucial to ensure that minorities grow up knowing that black children can have their own stories.