I feel like we have been talking about Megan Thee Stallion all summer, from looks to her recent media coverage to all the bangers she has delivered to our headphones.

Now Megan is Time magazine’s influential people of 2020 and as Taraji P Henson put it in the editorial “the epitome of tenacity, of pulling herself up by her bootstraps.”

Read below via CNN.

The 25-year-old rapper — born Megan Jovon Ruth Pete — is among the high-profile “pioneers” to feature on the prestigious list, which recognizes those who have impacted the world by “harnessing the power of influence to forge genuine progress.”

Explaining why the Houston native deserves a place among other high-profile names including Selena Gomez, Michaela Coel and Phoebe Waller-Bridge, Oscar-nominated actress Taraji P. Henson described Megan as “the epitome of tenacity.”

“I don’t like to put the stigma of the word strong on Black women because I think it dehumanizes us, but she has strength — strength through vulnerability,” the “Empire” star wrote in the special issue of Time.

“It’s invigorating to see her become a platinum-selling artist with the viral hit ‘Hot Girl Summer’ and multiple No. 1 songs in the past year, ‘Savage’ and ‘WAP.’ But you would be a fool to think that’s all there is to her. She’s deep.”

“She rode the beat like I’d never heard anybody ride the beat in a long time—and I’m a hip-hop head,” Henson wrote.

Touching on Megan’s personal struggles, she continued: “She’s lost much of her family — her mother, her father, her grandmother — yet she is the epitome of tenacity, of pulling herself up by her bootstraps. She was shot this summer, and still people tried to tear her down.”

Henson concluded the piece by adding that despite the industry’s efforts to “pigeonhole” her, Megan’s “got a plan that’s much bigger. And we got her. I just want her to keep winning.”

Megan, who recently topped the Billboard 100 chart with “WAP,” her collaboration with fellow rapper Cardi B, celebrated the honor with her fans on Instagram Tuesday, writing: “STILL I RISE ? YOUNG BLACK WOMAN FROM HOUSTON TEXAS ON THE COVER OF TIME MAGAZINE AS ONE OF THE MOST INFLUENTIAL PEOPLE IN THE WORLD.”

Megan has every reason to celebrate after a sensational year that saw her take home the award for Best Hip Hop Video for her song “Savage” at the 2020 MTV VMA Awards, launch a viral TikTok challenge, and collaborate with Beyoncé on the “Savage” remix for charity.

We are in love with all of the images within her editorial and this braided ponytail is everything! Check out some of the photos, Megan posted on Instagram. 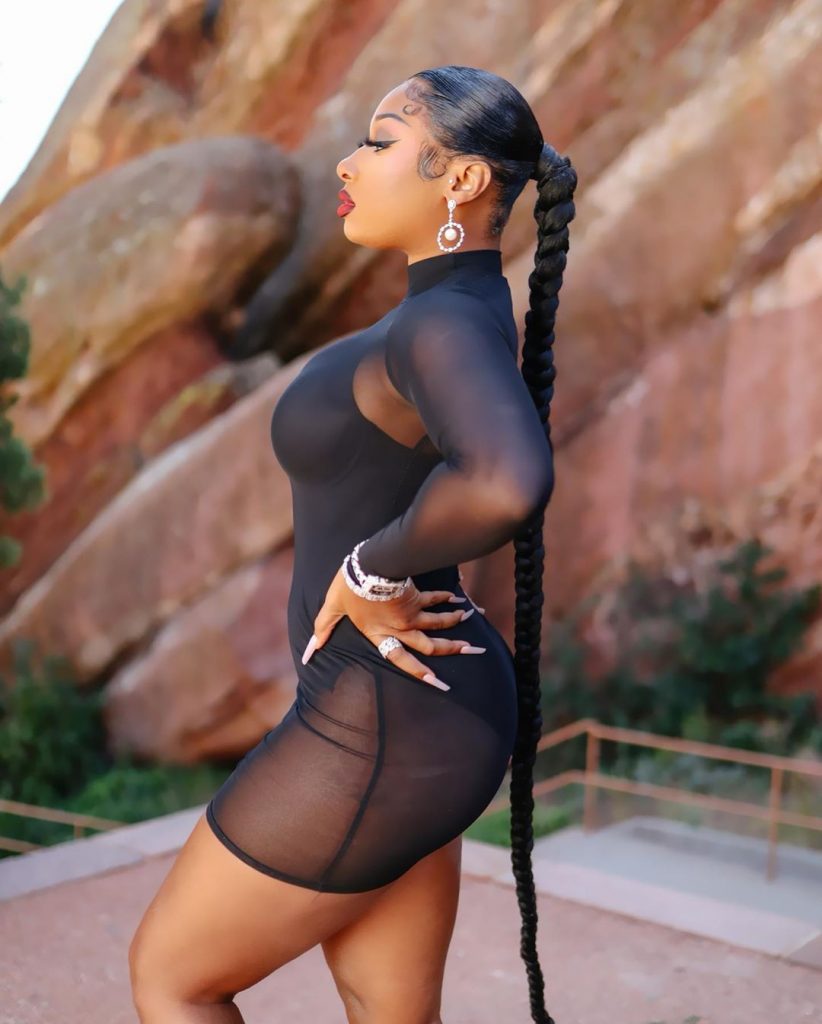 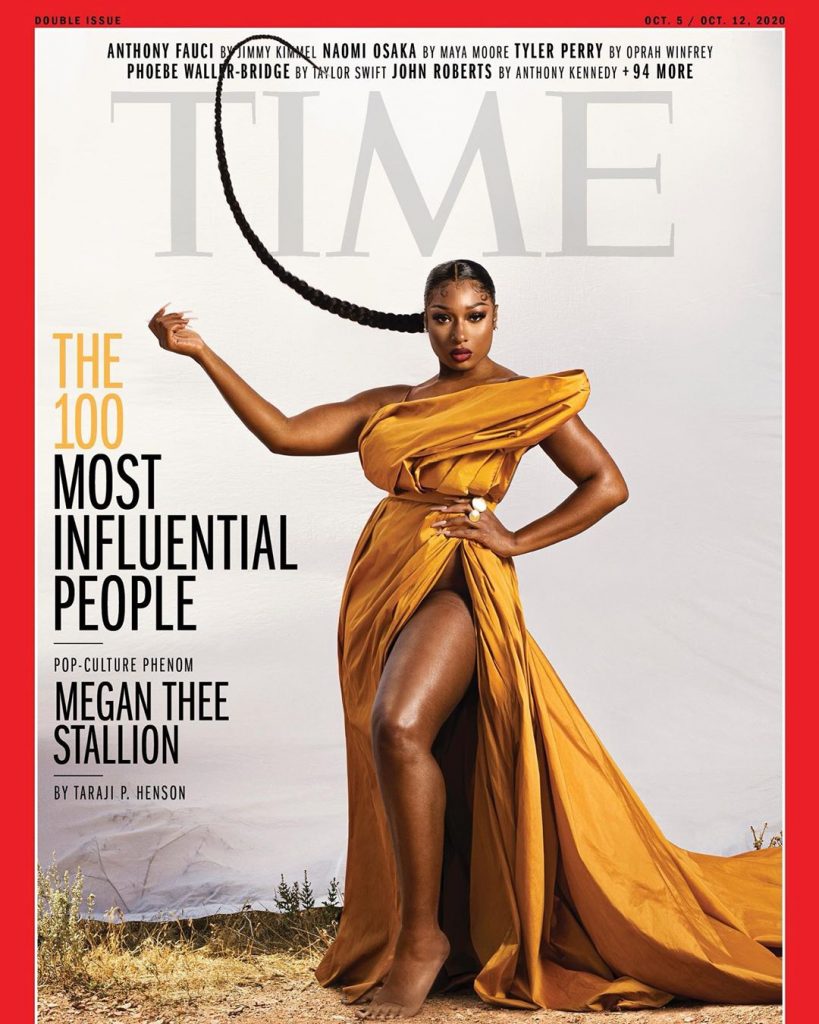 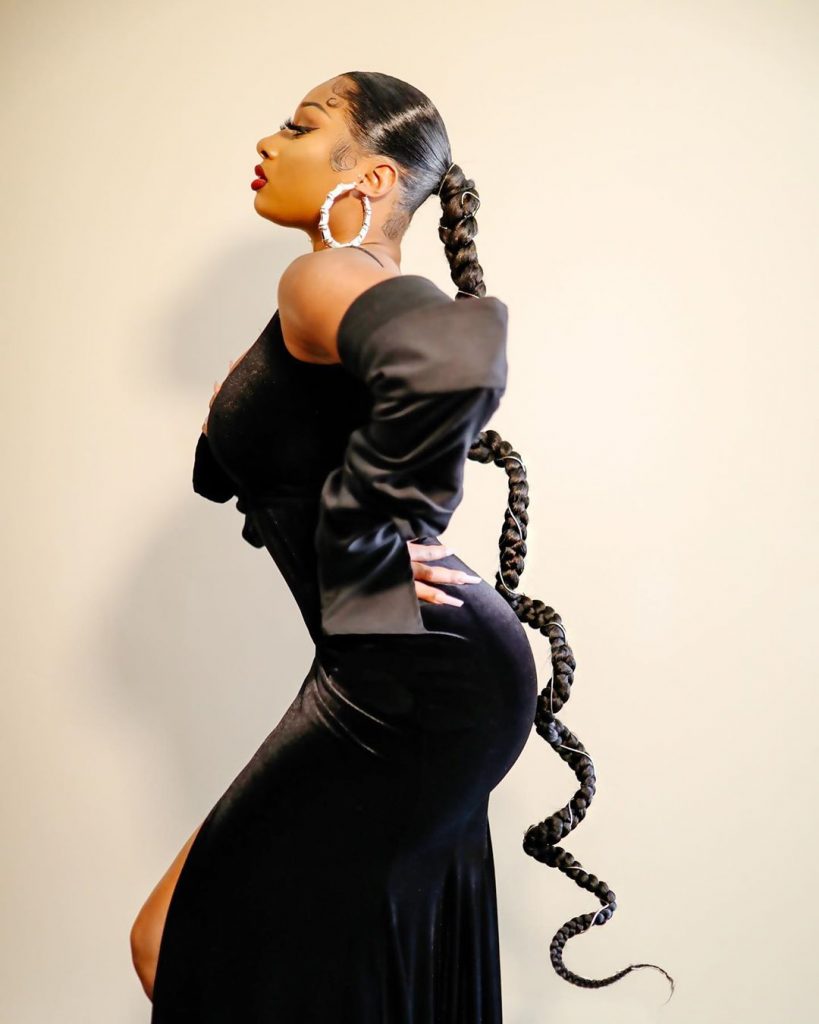 By the way, if you want to learn how to do a braided ponytail, check out this post here.