Miracle Watts Says “I got kids to feed” During An Instagram Post, Tyler Lepley’s EX Reminds Her That “they are not your children”

by emily1phone
in Celebrity, Culture
2

Recently social media influencer and actress Miracle Watts took to her instagram with a message for her 2.6 Mill followers.

She was talking about not quitting when times get hard.

It was a pretty positive message but it lead to a public spat with Tyler Lepley’s ex- fiancé.

“I just wanted to make this video to let all the girls out there with the small businesses, the big business, or what businesses you have – just to let y’all know to keep going….It’s not easy, everyday is not a good day.”

The 29-year-old is the owner of two brands Miracle’s Kloset and the Miracle Lifestyle.

“Some days I be having no sales I be wanting to cry. I don’t want to be putting no more money into it but I’m like girl just keep going, it’s go get better.”

The statement about having “kids” to feed rubbed the mother of Tyler’s two infant children, Leo and Jade, the wrong way.

April King was not here for that at all.

“You do? You have met Leo twice and Jade once. They are not your children.”

To which Miracle responded:

“#1 I would never try to fulfill your shoes as a mother, I have my own shoes to fill. #2 As woman and a mother you should feel good about someone who wants to embrace your children and include them as a family. Would you prefer the opposite? #3 I don’t do internet games, you have my number MS.KING!” 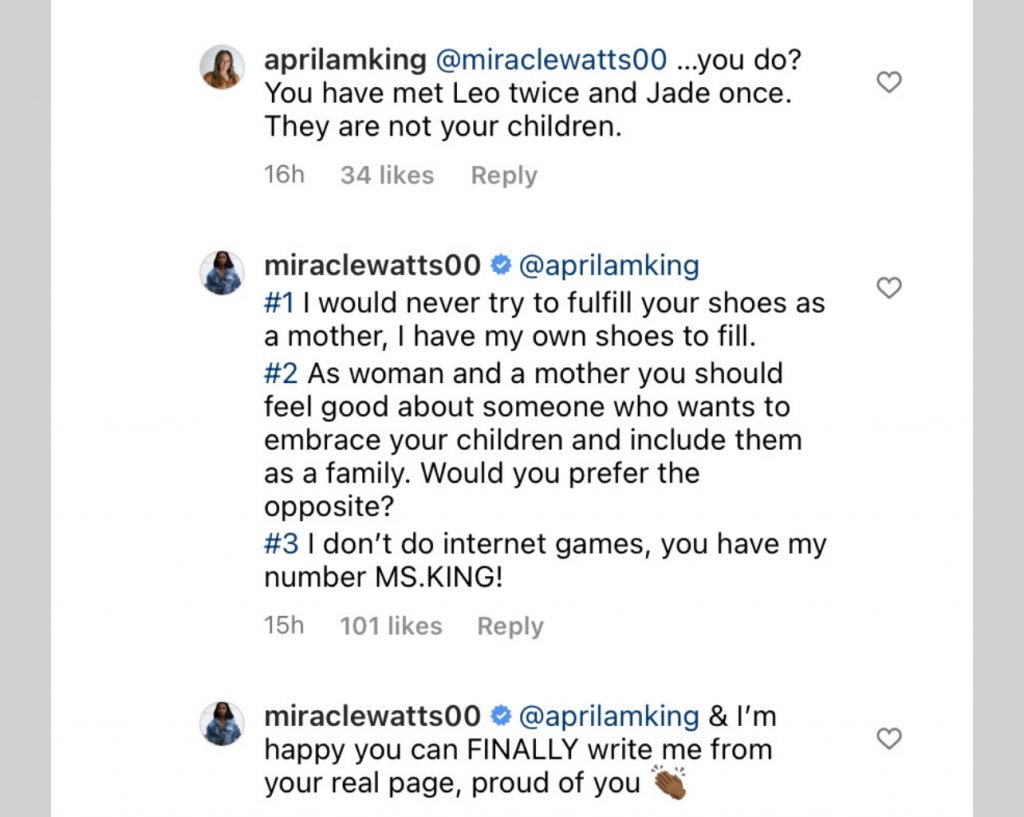 This exchange sparked a ton of conversation online about who is wrong in this situation.

Miracle Watts is 7-8 months pregnant by somebody who has a child that just turned 1 in December. Y’all know why that lady is mad don’t play dumb!

Right! Like Miracle’s hands is dirty and she just proved that by being messy. Like make sure homie don’t leave first given his track record before you want to play mommy to his other children 🥴

Ehhhh this seems a stretch with the dates like she got pregnant is November December and the baby is damn near one already.This doesn’t seem to be damning evidence.

I see now why the woman was upset when miracle claimed she had three kids, girl you don’t even know the kids.

Yup and has no right to claim that lady’s children to be her kids online. Especially after only meeting them once.

Reportedly Tyler And April broke up the same year he and Miracle started seeing each other.

Tyler and April were once engaged and during that time she was his agent.

Do you think Miracle was wrong for claiming the kids?