Monica has not had it easy on Social Media this week and it’s all because of one of her costume choices for Halloween.

To celebrate the national ‘holiday’ she dressed up as Lisa Left Eye Lopes’s infamous mugshot and shared her photo’s to Instagram.

According to AceShowbiz, the backlash was so swift Monica ended up removing all of her pictures.

On Monday, October 31, the 42-year-old posted on her Instagram page pictures of her dressing in a white floral dress while sporting thick bangs to emulate the late TLC star’s look from her infamous mug shot.

“The Boy Is Mine” songstress also appeared to draw a bruise on the upper corner of her lips while holding the board spelling the booking number from Fulton County Police Department in Atlanta, Georgia.

Many social media users were left shocked by Monica’s choice of Halloween costume, as they called it insensitive and offensive.

“Monica ‘Should’ve Known Better’ than to dress as her mugshot after being abused by her then boyfriend Andre Rison. Domestic Abuse isn’t a costume.

This was in VERY poor taste,” one Twitter user wrote.

Another enraged user tweeted, “Why would you dress as Left Eye’s mugshot? That lady is deceased and wasn’t that man an alcoholic or something laying hands on her? Pick another costume.”

Lisa’s mugshot was taken in 1994 following her arrest for setting fire to her boyfriend Andre Rison’s home.

She later revealed that the NFL star had beaten her after a night out and she set fire to his shoes in a bathtub to get back at him, but burning down the house was an accident.

Monica has not addressed the criticism for recreating the mugshot, but she has since removed the photos from her Instagram page.

She didn’t run out of ideas for her Halloween look though, as she later uploaded other pictures of her dressing up as Caesar from 2017’s sci-fi movie “War for the Planet of the Apes”.

Meanwhile, Lisa’s TLC groupmate T-Boz didn’t seem to take offense with Monica’s Halloween costume. “Haaaaaaaa U crazy love it!” she commented on Monica’s post before it was deleted. 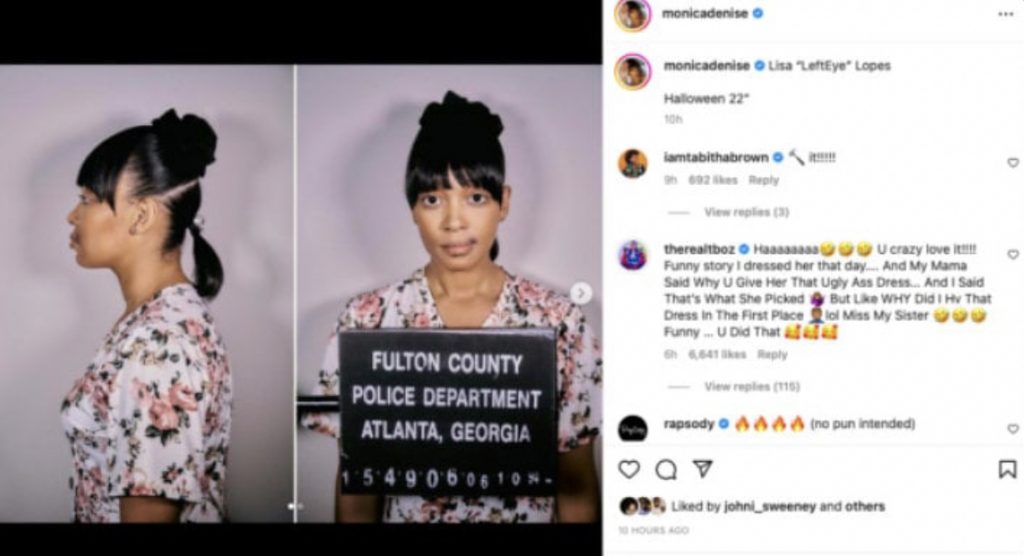 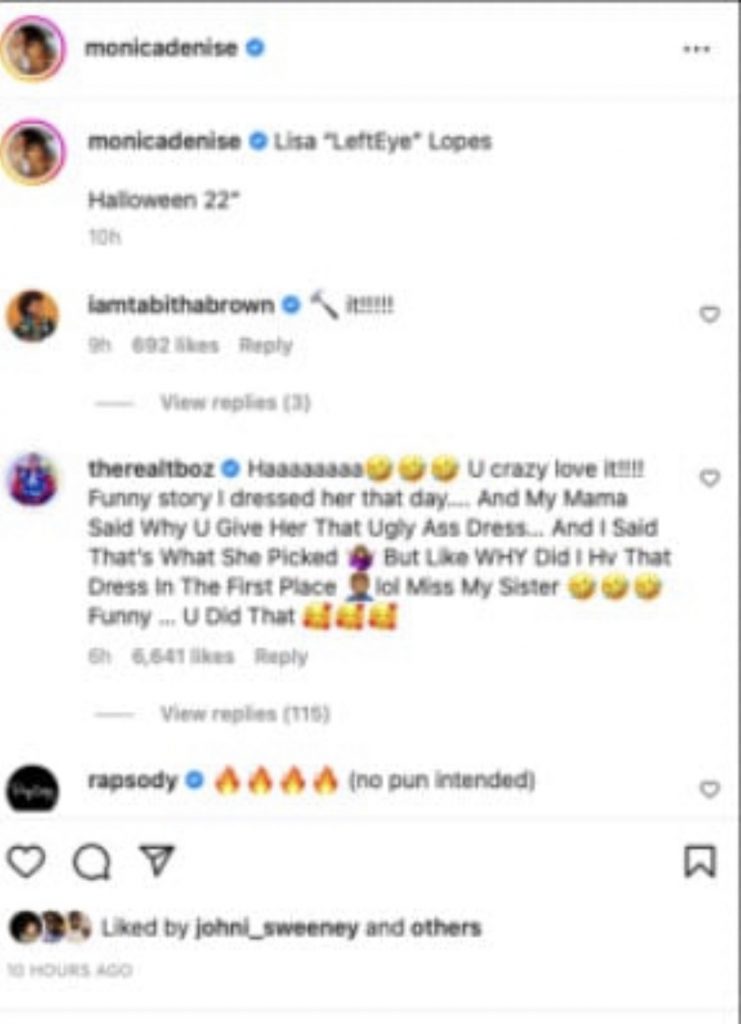 She went on sharing the backstory behind the mugshot, “Funny story I dressed her that day…. And My Mama Said Why U Give Her That Ugly A** Dress… And I Said That’s What She Picked But Like WHY Did I Hv That Dress In The First Place lol.” She added of her late groupmate, “Miss My Sister. Funny … U Did That.”

Why would Monica dress up as left eye the night she was abused & include the bruise that man left on her mouth. & ppl in the comments saying she ate like wtf goin on fr is everyone okay? What happened to not glamorizing domestic violence…how are we back at square one. I give up.

Monica’s costume is disturbing b/c she chose a time when Left Eye admittedly said she was at her lowest point in life, & she did all the mental work and healing to get past it. We ALL saw the interview. #LeftEye is the culture and she deserves better.

Lisa LeftEye Lopes is a multi-platinum, multi-Grammy award winning artist of the legendary group TLC. Monica “Should’ve Known Better” than to dress as her mugshot after being abused by her then boyfriend Andre Rison. Domestic Abuse isn’t a costume. This was in VERY poor taste! pic.twitter.com/KE983u5kNa

Monica been making poor decisions all her celebrity life and it’s time to start a dialogue. That Left eye “costume” was in trash taste.

Much like it's corny when people dress up as Ike and Tina Turner, it's wrong for Monica to dress up as left eye with a clear bruise on her lip. Making light of domestic violence is not ok

someone tell Monica this is how you pay tribute to Left Eye. https://t.co/twZqovQkfo

Al B. Sure’s Son Reveals The R&B Singer Was In A Coma For 2 Months