If you have been under a rock or simply inundated with stories of cheating scandals then you probably would not have heard that Former NFL quarterback Brett Favre allegedly conspired to steal millions in welfare funds from the State of Mississippi.

According to reports Favre received $1 million in federal funds for appearances and ‘talks’ that he did not do and $5 million to construct a Volleyball stadium at the school his daughter attends and plays for.

According to Vox Favre is part of a sprawling web of corruption enveloping the state, the same state that faced a water crisis just a few weeks ago.

By web of corruption this is what we mean:

1. John Davis, the director of the Mississippi Department of Human Services (MDHS), funneled tens of millions of dollars in block-granted TANF money to a nonprofit, Mississippi Community Education Center, under the guise that the nonprofit was performing and subcontracting TANF-allowable activities.
2. Nancy New, head of the Mississippi Community Education Center, kicked back money to Davis, his friends, and his family while enriching herself and her family as well. (A second nonprofit, the Family Resource Center, was also involved, but none of its personnel have been criminally charged.) On Thursday, Davis pleaded guilty to federal and local charges; New herself pleaded guilty in April.
3. John Davis’s nephew was paid $400,000 to create “coding academies” for the two nonprofits. He had no experience as a computer programmer and produced nothing.
4. Davis’s brother-in-law was paid over $600,000 for a nonexistent job and a lease on a nonexistent building.
5. Marcus Dupree, a former college football phenom, was paid $371,000 to buy a 4,000-square-foot house, with a swimming pool, pavilion, and “adjoining acreage on which Mr. Dupree was to maintain horses.” Dupree claimed in charity filings it would be for “equestrian activities for underprivileged children.”

According to Complex Former NFL quarterback Brett Favre has been called out by his former teammate Sage Rosenfels over allegations he engaged in welfare fraud.

“Since retirement, I have been lucky to avoid stealing millions of dollars from the poorest people in my state,” wrote Rosenfels in a tweet that did everything but mention Favre by name. “Of course, this is partially because I had already stolen millions from the richest people in our country,” he added later.

Since retirement, I have been lucky to avoid stealing millions of dollars from the poorest people in my state.

Of course, this is partially because I had already stolen millions from the richest people in our country. https://t.co/pC8YfPAqZ6

While Favre has denied any wrongdoing, a new extensive report from The New York Times claims that he texted a question to the head of a nonprofit that was sending out funds intended for welfare recipients.

“If you were to pay me,” he wrote in the 2017 text, “is there any way the media could find out where it came from and how much?”

The texts show that the then-governor even guided Favre on how to write a funding proposal so that it could be accepted by the Mississippi Department of Human Services – even after Bryant ousted the former welfare agency director John Davis for suspected fraud.

“Just left Brett Favre,” Bryant texted nonprofit founder Nancy New in July of 2019, within weeks of Davis’ departure. “Can we help him with his project. We should meet soon to see how I can make sure we keep your projects on course.”

When Favre asked Bryant how the new agency director might affect their plans to fund the volleyball stadium, Bryant assured him, “I will handle that… long story but had to make a change. But I will call Nancy and see what it will take,” according to the filing and a text Favre forwarded to New.

The newly released texts, filed Monday by an attorney representing Nancy New’s nonprofit, show that Bryant, Favre, New, Davis and others worked together to channel at least $5 million of the state’s welfare funds to build a new volleyball stadium at University of Southern Mississippi, where Favre’s daughter played the sport. Favre received most of the credit for raising funds to construct the facility.

Bryant has for years denied any close involvement in the steering of welfare funds to the volleyball stadium, though plans for the project even included naming the building after him, one text shows.

New, a friend of Bryant’s wife Deborah, ran a nonprofit that was in charge of spending tens of millions of flexible federal welfare dollars outside of public view. What followed was the biggest public fraud case in state history, according to the state auditor’s office. Nonprofit leaders had misspent at least $77 million in funds that were supposed to help the needy, forensic auditors found. 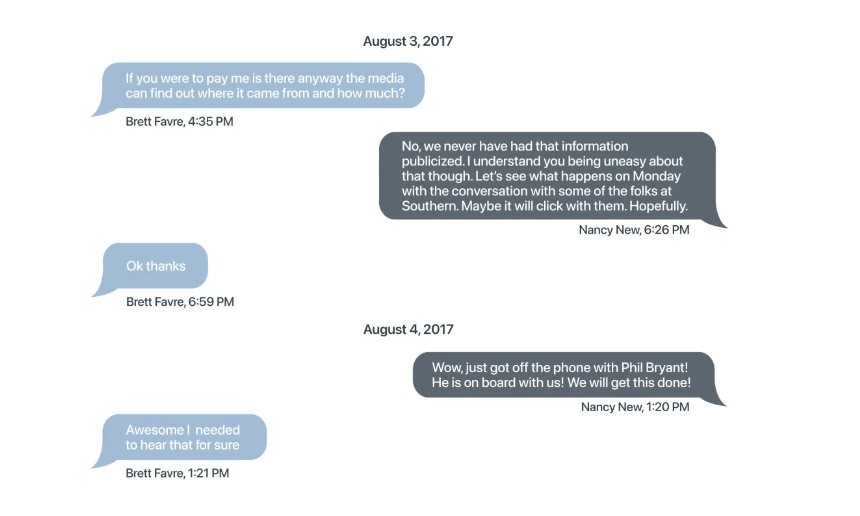 Brett Favre is a multi-millionaire. He basically stole from the poorest of the poor. This is not about politics, it’s about humanity. Disgusting.

I can’t stop thinking about how evil it is what Brett Favre did. A wealthy, famous white man – from a state with an unparalleled history of racialized poverty – steals welfare dollars from its poorest people. Truly super villain shit.

Colin Kaepernick took a knee — and got blackballed from football for life.

Brett Favre took $5 million from needy kids and families — and is ANYTHING going to happen to him?

The Bible Belt is actually the Corruption Belt

In case ya’ll don’t know him, this is Brett Favre who stole millions from the poor in Mississippi to build a stadium at his daughter college. He is a disgrace and should be held accountable. pic.twitter.com/qzHtpwA3Ee

Tom Brady took a $1M PPP loan. He made $83M that year and purchased a multi million dollar boat days after the loan

Who lost their NFL career?

Why isn’t the media treating Brett Favre the same way they did Michael Vick? What’s different? Isn’t stealing over a million dollars from hungry human children worse than mistreating animals? What am I missing here?

Neither Bryant nor Favre have been charged with any crime.

Fighting Back! Tasha K Has Reportedly Rushed To Court To Prevent Cardi B From Garnishing Her Wages

Fighting Back! Tasha K Has Reportedly Rushed To Court To Prevent Cardi B From Garnishing Her Wages