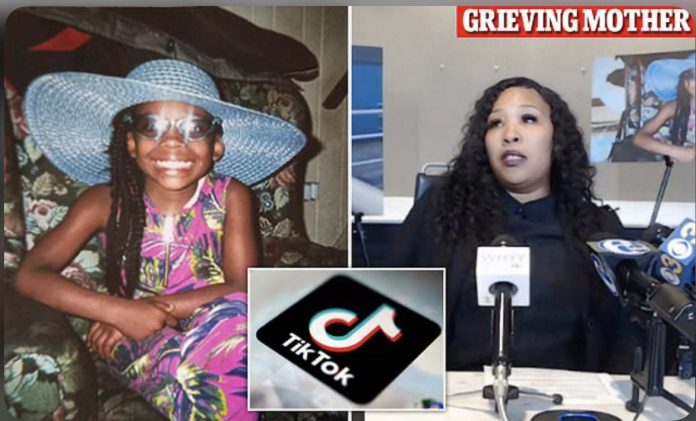 Last year we shared the sad news about 10 yr old Nyla Anderson, who attempted the popular ‘Black Out Challenge’ where you hold your breath until you pass out.

The family warned others that what happened to Young Nyla was under their own roof while the family was home.

“She was a butterfly,” says Tawainna Anderson, who just lost her 10-year-old daughter, Nylah. “She was everything. She was a happy child.”

“She happened to be in her own bedroom of her house, with her family at home,” said Elizabeth Wood, a licensed clinical social worker at the local hospital.

“But no one was in the bedroom with her when this happened, so there was no one there to save her.”

Nylah’s family is in a state of shock. They rushed her to the hospital, but she didn’t make it.

“Make sure you check your kids’ phones,” Nylah’s mom warns.

“You never know what you might find on their phones. You wouldn’t think 10-year-olds would try this. They’re trying because they’re kids and they don’t know better.”

According to CBS news In her lawsuit, filed in the U.S. District Court for the Eastern District of Pennsylvania, Anderson says her daughter heard about the challenge from TikTok’s “for you page” which serves users videos based on an algorithm.

TikTok’s “algorithm determined that the deadly Blackout Challenge was well-tailored and likely to be of interest to 10-year-old Nylah Anderson, and she died as a result,” the suit reads.

Before she died, Nylah was “an active, happy, healthy, and incredibly intelligent child,” the suit reads. “Though only 10 years old, Nylah spoke three languages.”

The algorithm, the suit alleges, takes into account users’ demographics, including age, and that it preys “upon vulnerable users, such as children, who are thrust into a never-ending dopamine feedback loop which creates addiction and a compelling urge to engage further in the TikTok Defendants’ app.”

The suit names several other dangerous challenges that circulated on TikTok, such as the “milk crate” challenge, which had users trying to climb flimsy pyramids of milk crates which sometimes collapsed beneath them and could lead to injuries.

“One of the deadliest TikTok Challenges to make its rounds on the TikTok Defendants’ app and be promoted to users by their FYP algorithm is the TikTok Blackout Challenge, which encourages users to choke themselves with belts, purse strings, or anything similar until passing out,” the suit reads.

The suit alleges TikTok knew of several other children who died from the challenge, saying Nylah is just the latest in a growing list.

In April 2021, the family of 12-year-old Joshua Haileyesus, from Colorado, said he may have died doing the challenge.

The family believes he may have tried to choke himself with a shoelace, KCNC reports.

The mom is suing the social media giant for multiple counts including wrongful death, strict products liability and negligence. She is suing for an undisclosed amount in damages.

Anderson told CBS Philadelphia that she cannot stop replaying the day her daughter died in her head. “I want to hold this company accountable,” Anderson said.

“It is time that these dangerous challenges come to an end, that other families don’t experience the heartbreak we live every day.”

“Our lawsuit is not about simply somebody posting the video, it’s about the actions that TikTok took to send the video to Nylah,” said attorney Jeffrey Goodman, partner at Saltz Mongeluzzi & Bendesky P.C.