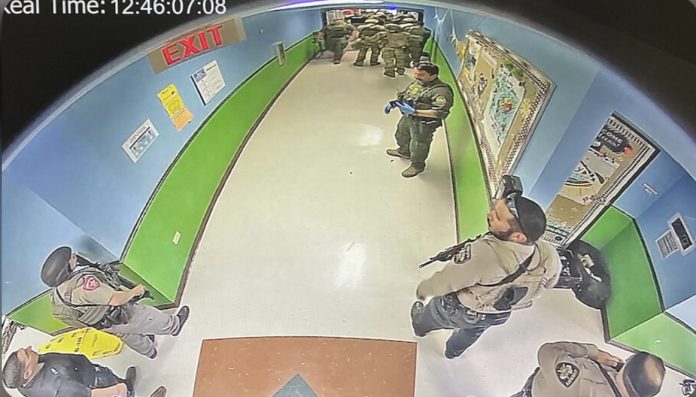 As more details come out of the investigation of the Uvalde elementary school shooting, officials are saying the police could have done so much more to save the children.

A top Texas law enforcement official said that there were enough armed police officers wearing body armor to stop the late May shooting at Robb Elementary School in Uvalde, Texas three minutes after it began.

But instead, it took about an hour and 14 minutes from when officers arrived at the school to when they breached the door and ended the standoff with the gunman.

That was according to Steve McCraw, director of the Texas Department of Public Safety, who spoke to state officials during a Texas Senate committee hearing on Tuesday.

He added that the outside door the shooter used to enter the school was unlocked, though the lock was working properly.

McCraw called the police response to the shooting an “abject failure” and said it was “antithetical” to the lessons learned about active shooter situations since the shooting at Columbine High School in 1999.

In particular, McCraw criticized the on-scene commander for waiting to confront the shooter rather than breaching the classroom where he was hiding as soon as possible.

Authorities have said school district police chief Pete Arredondo, who treated the shooting as a barricade situation rather than an active shooter, caused delays in the police response.

The shooting left 19 students and two teachers dead. The Texas Department of Public Safety is one of several agencies investigating the attack.

McCraw added that the handheld radios used by law enforcement officers — other than those used by the Border Patrol — did not work inside Robb Elementary School. He noted that the school’s four-foot perimeter fence failed to stop the shooter from entering campus grounds.

McCraw also praised teachers and staff at the elementary school for quickly initiating active shooter protocols when the attack began.