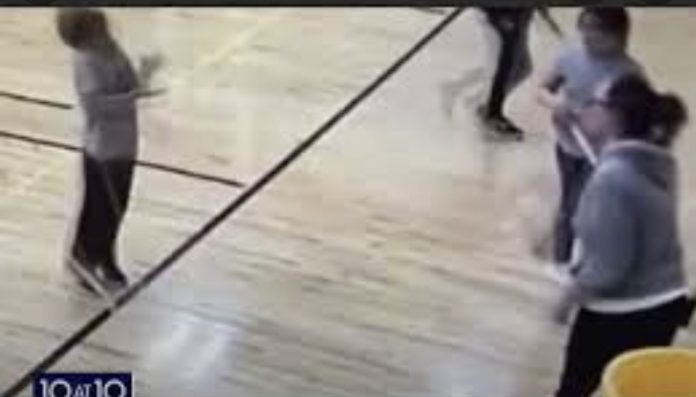 A surveillance camera captured a disturbing incident of a teacher throwing a hockey stick at an 8yr old student during gym.

According to Newsbreak: 8-year-old Easton Johnson says he’s scared to return to school this fall after his gym teacher threw a hockey stick at him, knocking his front tooth loose.

The moment was captured on surveillance camera back in March, but Easton Johnson’s mom is finally breaking her silence over it, feeling like the district didn’t do enough.

“They would just say that it was a bad reaction the teacher had, and I just have a hard time swallowing that that’s how they feel,” said Jodi Johnson, Easton’s mom.

Easton was in gym class on March 28, one day after his 8th birthday, throwing hockey sticks into a pile along with other students, when teacher, Kim Neubauer, picked up the stick Easton just laid down and threw it back at him.

“With the force of the stick, it hit the upper part of his mouth and it did knock a tooth out,” said Johnson, who says he, fortunately, lost a baby tooth, but the root and gum were significantly damaged and his lip was also busted.

Two weeks after the incident, the district said it put Kim Neubauer on unpaid administrative leave through the end of the school year.

The school year ended last week and the district says it ended employment with her on Friday, but Easton’s parents say that’s not enough.

“The school district, the principal, the nurse, nobody made a police report,” says Johnson. She’s frustrated no one can be held accountable for this because there is no criminal investigation into it.

After Neubauer was let go, the district publicly recognized it as a retirement, putting up a congratulatory post on Facebook, which was ultimately taken down.

Today, Easton is enjoying his summer break with his dog Mya, but his mom says Easton’s anxiety about starting third grade in the fall is already setting in.

“He’s very nervous about gym class, who teaches gym class, what do they do in that gym glass. It’s going to take quite a bit I think to get him to feel comfortable again,” said Johnson.

WCCO reached out to Neubauer for comment. She did not respond.

Student safety is the top priority of the Princeton Public School District. When the District receives a complaint related to student safety, we investigate immediately and take appropriate action to address any substantiated concerns. In those rare situations in which a staff member’s conduct creates or contributes to a dangerous situation, the District may take action to end the employment relationship. In addition, we may make reports to the Minnesota Department of Education as well as law enforcement. Unfortunately, data privacy laws often prohibit the District from sharing information about the actions it has taken. We love our students and we work tirelessly to protect and support them.”