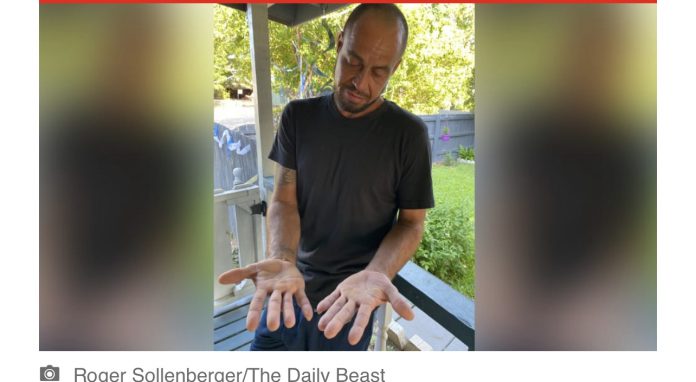 The Father of the 18-year-old gunman spoke exclusively with The Daily Beast apologizing for his son’s actions and saying he doesn’t want people to think his child is a monster.

In an interview with The Daily Beast on Thursday, Salvador Ramos said, “I just want the people to know I’m sorry man, [for] what my son did.”

His son, also called Salvador, shot his grandmother in the face on Tuesday and drove away with her car, before running the truck into a ditch outside Robb Elementary and opening fire on a fourth-grade classroom.

The teenager—whose attack has claimed the lives of at least 19 young children and two adults—was killed at the scene.

It was the deadliest school shooting in the U.S. in nearly a decade.

Ramos said he was at work the day of the shooting, and only learned of it when his own mother called to tell him. In a panic, he started calling the local jail, asking them if his son was there.

Eventually the realization sunk in.

“They killed my baby man,” he said.

He added: “I’m never gonna see my son again, just like they’re not gonna see their kids. And that hurts me.”

The Daily Beast spoke with Ramos on the porch of his girlfriend’s home east of Uvalde, where he has been living for several years. The house and the bushes outside were adorned with blue and white streamers for a graduating senior. At times, the tough-spoken Texan broke into tears.

The details of his son’s attack were horrifying: According to authorities, he purchased two rifles and 375 rounds of ammunition in the leadup to the massacre, and barricaded himself inside the classroom for over an hour. One student recalled him telling the children in the classroom: “It’s time to die.”

Despite the horrific slaughter he carried out Tuesday, Ramos insisted that his son was “a good person” who “stuck to himself.” He claimed to have no idea why his son became so violent, or why he chose to target the school.

But he said he did notice one change in his son in recent months: a pair of boxing gloves he’d purchased and started testing out at a local park. “I said, ‘Mijo, one day somebody’s going to kick your ass,’” Ramos recalled. “I started seeing different changes in him like that.”

The younger Ramos reportedly had a poor relationship with his mother and had dropped out of high school ahead of his graduation this year. His father admitted he had not spent much time with him lately because he was employed outside Uvalde—he digs holes around utility poles for inspection—and because of the pandemic.

His own mother was suffering from cancer, Ramos said, and he could not risk being exposed to the coronavirus. He added that his son grew frustrated with the COVID precautions about a month ago and refused to speak to him. Ramos has not seen him since.

“My mom tells me he probably would have shot me too, because he would always say I didn’t love him,” he told The Daily Beast.

Ramos also faulted the boy’s mother, Adriana Reyes, for not buying him more school supplies and clothes. He said his son was bullied at school for wearing the same high-water jeans every day, and that this was the reason he ultimately dropped out. Attempts to reach Reyes for comment this week were unsuccessful.

For his own part, the father has a lengthy criminal record which includes at least one conviction for assault and causing bodily injury to a family member. He said he was currently estranged from his daughter—the gunman’s sister—who he said was also upset with him for not spending enough time with the family.

The sister, 21, joined the Navy and is no longer living at home.

“My daughter, I guess, changed her life, she went to the Navy,” he said. “I wish my son would have gone and changed his life.”

Ramos said his son frequently complained about his maternal grandmother, who was in the hospital recovering from her injuries this week. He said he offered to let his son move in with his own parents, but that the teenager declined, citing the lack of WiFi. (The teenager’s final dispute with his maternal grandmother before he shot her was reportedly about his phone bill.)

Former classmates and families confirmed that the younger Ramos had been bullied in middle school for a speech impediment.

But some former co-workers and others who knew him said Ramos had an aggressive streak, and his internet history pointed to someone all too happy to descend into twisted boasting about guns and mass bloodshed.

A high school classmate told the Washington Post she had seen Ramos engage in multiple fist fights, and a former co-worker told The Daily Beast he was inclined toward harassing women he worked with.

“I don’t think he was necessarily bullied,” the classmate, Nadia Reyes, told the paper. “He would take things too far, say something that shouldn’t be said, and then he would go into defense mode about it.”