The tragic story of a 6-yr old boy who shot his teacher has more details.

According to the Washington Post, there have been previous complaints that were downplayed or dismissed.

Abigail Zwerner, 25, reportedly raised concerns and requested help from school officials relating to the boy’s behavior, which apparently included a threat to light a teacher on fire and watch her die.

The child, who was known to throw furniture and other objects in the classroom, once wrote a note to a teacher in which he told her he hated her, wanted to set her on fire to kill her, the teachers union told The Washington Post. When she brought the disturbing letter to school administrators, they told her to drop it, according to the teacher. Another time, the student managed to block a teacher and other students from leaving their classroom by barricading the doors. They were only freed after the teacher banged on the door, and a colleague across the hall managed to get it open.

The issue was dismissed, according to messages from fellow teachers obtained by The Post.

A teacher was injured in a shooting Friday afternoon, Jan. 6, 2023, at Richneck Elementary School in Newport News, Virginia, according to police and school officials.

Zwerner was teaching a first-grade class when the boy pulled out a 9mm handgun owned by his mother and fired at her, hitting her first through her hand that she held up in a defensive posture and then in her upper chest.

The 25-year-old, who is now in stable condition, has been praised for escorting all of her students out of the classroom to safety even after she had been shot, as another school employee rushed in and physically restrained the boy.

Richneck Elementary School in Newport News has since faced criticism for its handling of the shooting that authorities have deemed “intentional.”

Parents were already reportedly outraged when Newport News Superintendent George Parker III said the school had received a tip that the boy had a gun that day, but then failed to uncover the weapon after searching his school bag.

Police and school officials have not answered questions relating to the boy’s behavior, and Fox News Digital could not reach Zwerner for comment.

The investigation remains ongoing, and the boy remains in emergency custody at a medical facility following a detention order earlier this month.

The family of the student spoke out for the first time this week and said that the gun had been “secured” before the boy took it to school.

The boy’s family claim that he has an “acute disability” and was under a care plan at the school that included his mother or father attending school with him and accompanying him to class every day. The day of the shooting, though, they were not present. They also claim the gun was secured in their home, so they’re unsure how he was able to get possession of the firearm. 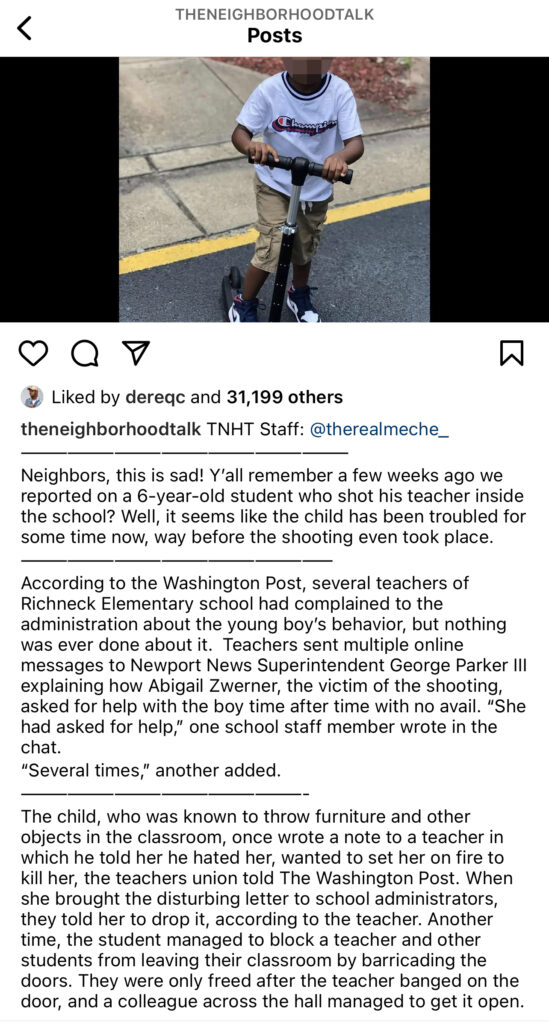 “Our heart goes out to our son’s teacher and we pray for her healing in the aftermath of such an unimaginable tragedy as she selflessly served our son and the children in the school,” the child’s family said Thursday in a statement.

“Our family has always been committed to responsible gun ownership and keeping firearms out of the reach of children,” the statement added, though it did not elaborate on how it was “secured.”

A 6 yr old shot a teacher with a handgun in Virginia. A 14 yr old girl shot an 11 yr old boy during an argument with another girl in Dallas. A 4 yr old was brandishing a gun in Indiana. We have a gun culture problem. Adults must be held responsible. Enough! #guncontrolnow

Watch Blue Ivy Perform “Brown Skin Girl” With Beyonce, Sis Was Ready To Go In On Her Little Routine