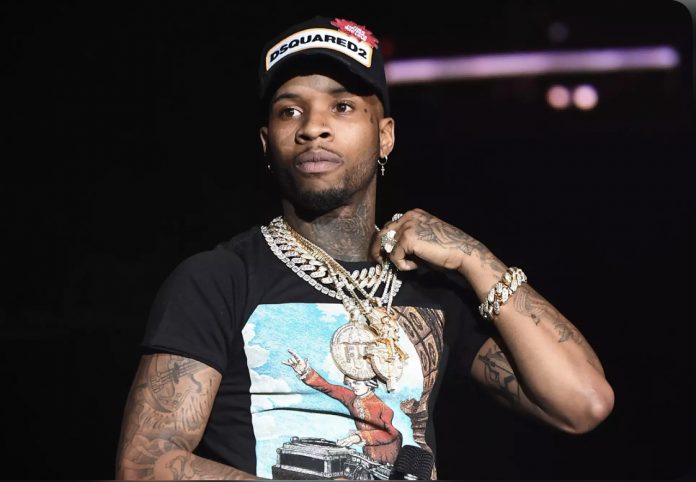 Looks like legal counsel is bout fed up with Tory.

According to an exclusive with Radaronline court documents obtained by them indicate that the 30-year-old ‘pint-sized rapper’ ex-attorney Christopher E. Ells asked the court for permission to withdraw as counsel.

In his motion, Ells said “irreconcilable differences have arisen between” him and Lanez “which cannot be resolved.” The attorney said he is “unable to effectively represent” the rapper.

He told the court it was in the best interest of both parties to let him leave. Recently, the judge presiding over the case signed off on the request.

In his lawsuit, he said on November 8, 2019, while inside LIV Nightclub, Tory “verbally antagonized” him and “attempted to engage [Prince] in a verbal confrontation.”

Prince said Lanez then punched him in the face with a closed fist. The VH1 star said Tory’s security jumped in and continued assaulting him at Lanez’ direction.

The reality star said he sustained multiple contusions and bruises to his body.

A year later, Prince said while inside a separate nightclub Lanez employee attacked him.

“Immediately after punching [Prince] in the face, [Tory’s] employee/agent fled and attempted to enter [Tory’s] vehicle. However, [Tory] yelled at the agent/employee and instructed him to leave the premises in a separate vehicle,” the suit read.

Prince’s lawsuit seeks unspecified damages for the alleged physical, psychological, and mental distress “from blunt force trauma” to his neck, chest, and back.

As RadarOnline.com first reported, Lanez has argued his actions were done in self-defense. In his motion to dismiss, he cited the law, “A person is justified in using or threatening to use force against another when and to the extent that the person reasonably believes that such conduct is necessary to defend himself or another against the other’s imminent use of unlawful force.”

Lanez said both parties played a role in the fights. The case is ongoing. The rapper is also still facing criminal charges in Los Angeles for allegelly shooting Megan Thee Stallion. He has denied being responsible.

Then on top of all of that Tory is now being investigated for the alledged assault of August Alsina.

According to Billboard in an Instagram post, Alsina accused Lanez of attacking him backstage after a concert in Chicago on Saturday night.

He is being investigated by the Los Angeles District Attorney’s Office following allegations that the rapper assaulted singer.

On Sunday, Alsina posted a photo of himself to Instagram in which he can be seen standing in an elevator with blood coming from his mouth. In the caption, Alsina claims Lanez physically assaulted him after he refused to shake his hand following a show on Saturday night.

“We are aware of the allegations that the defendant attacked artist August Alsina and are investigating these claims,” said the Los Angeles District Attorney’s Office in a statement to Billboard. “The allegations are serious and will be thoroughly examined.”

A video published to Twitter on Monday purporting to document the lead-up and aftermath of the alleged assault appears to show Alsina rebuffing a handshake from Lanez backstage. In the final half of the video, Lanez seems to be celebrating as a man off-camera can be heard saying Lanez “knocked him out.”

Tory Lanez was embarrassed August Alsina curved him so crazily and went in attack mode🤣 pic.twitter.com/ndC6HfD1ws