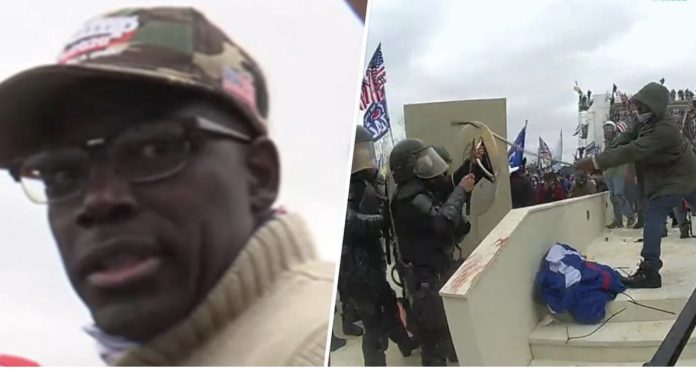 Sometimes we have to be reminded just who we are and the justice system is always right on time with the reality checks.

While many of the Capitol rioters received a variety of sentencing Mark Ponder is making his rounds on the blogs after receiving 5 years for his participation in the riots.

He is a proud Donald Trump supporter who assaulted police officers at the Capitol on Jan. 6, 2021 according to NBC News.

He believed the former president’s lies about the 2020 presidential election was sentenced to more than five years in prison Tuesday.

Mark Ponder, one of just four Washington residents arrested for their actions on Jan. 6, was given 63 months in federal prison by U.S. District Judge Tanya Chutkan.

His sentence is tied for the longest imposed to date for Jan. 6 with that of Robert Scott Palmer, who attacked law enforcement officers with a fire extinguisher.

The government’s sentencing memo spells out how Ponder “charged” Gonell, “waved [a] pole aggressively and then attacked” Gonell.

“Ponder struck the riot shield with such force that the pole snapped and broke apart as it made contact with the shield, and the top portion of the pole flew off to the side,” the sentencing memo said. “Ponder then retreated back into the crowd. The screenshot below captures this assault.”

Gonell, a military veteran and immigrant, told reporters last month that he will “never be back in uniform” because of the injuries he sustained on Jan. 6. Gonell’s more severe injuries were inflicted later in the day, after he was assaulted by Ponder.

In an interview after Ponder’s sentencing, Gonell said it was important for him to show up to give a statement in Ponder’s case.

“I’m not a vindictive person. I forgive him. But I won’t forget about what he did,” Gonell said.