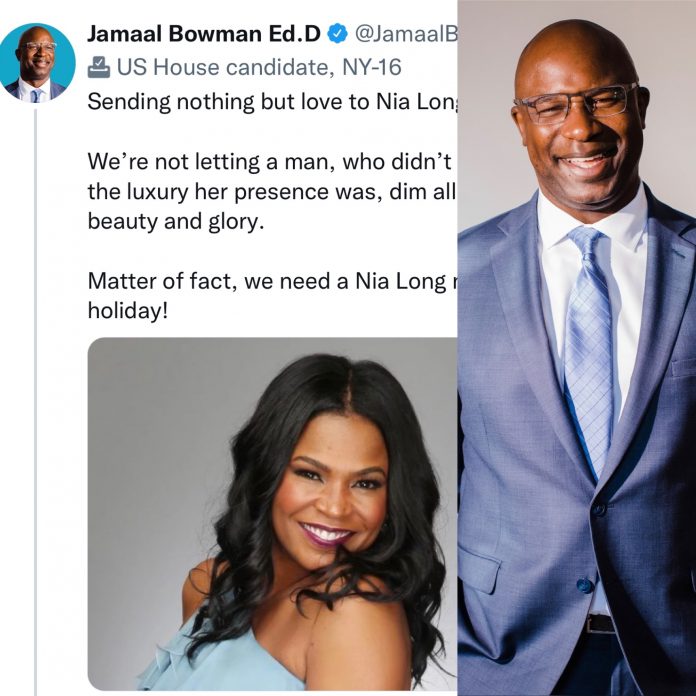 Ima really need one of yall to tell me what is happening with the city boys this week. 😩

They are so far down, we lost count!

(🗣🗣Boys, please send the flares up because you all are so far in a deficit we can no longer ‘see’ you.)

Now to the matter at hand….

Why would a sitting NY Congressman find the time to Tweet what he just tweeted within the depths of black Twitter and not expect to be eaten alive?

And while his accolades make it seem as if he would be very busy he found himself in a Twitter firestorm after tweeting support for Nia Long who he thinks should have her own national holiday.

Sending nothing but love to Nia Long.

We’re not letting a man, who didn’t recognize the luxury her presence was, dim all her beauty and glory.

The tweets that followed are nothing short of hilarious, sarcastic, and everything we needed on this good Friday!

Can’t wait to explain to my kids why they don’t have to go to school on National Nia Long Day and the heroism of elected officials like Jamaal Bowman to make the day possible.

gone head log off for me big bro. pic.twitter.com/9arSlMYQBV

Jamaal Bowman taking a break from supporting the Isreali military to shoot his shot at Nia Long. https://t.co/5qxIzSMoCw

Only 3 women who could make me risk a public office position like Mr Jamaal Bowman did are Ashanti, Rihanna and Nia Long pic.twitter.com/qFNXpBa7jX

The Congressman isn’t letting all memes and jokes bother him though, tweeting that it’s ok for a man to show a woman love without shooting his shot.

Hahaha, ya’ll hilarious. Y’all do know it’s okay for a man to show a woman love and support without shooting his shot? That’s actually a thing.

Hahaha, ya’ll hilarious. Y’all do know it’s okay for a man to show a woman love and support without shooting his shot? That’s actually a thing.

Safe to say the Congressman is taking it all in stride. 😂😂