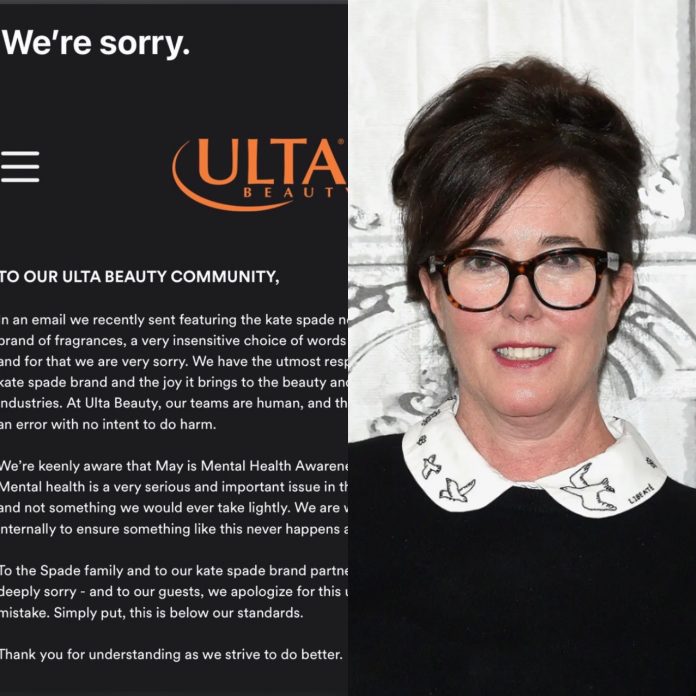 Ulta came under fire over the weekend after an insensitive promotional email some shoppers felt referenced the designer’s suicide.

According to People Ulta is apologizing for sending out an advertisement that promoted a Kate Spade New York fragrance in an insensitive manner.

Spade, 55, was found dead in her New York apartment in 2018. Her cause of death was suicide by hanging.

Many subscribers shared their outrage about the email on social media Monday.

One user on Twitter said, it “seems like a poor choice of words.” Another wrote, “I am in complete shock at this email I got from @ultabeauty Kate Spade took her own life in 2018 by hanging herself. What were you thinking, Ulta?!”

May is the start of Mental Health Awareness Month as well, and one Twitter user was especially appalled by the timing of the email writing, “Whoever wrote the incredibly crass email headline at Ulta for the Kate Spade event yesterday also managed to do it on the first day of Mental Health Awareness Month. An ignominious start by demonstrating the carelessness people tend to have around this topic.”

Following the backlash, the cosmetics retail giant sent out an email to subscribers apologizing for the lack of sensitivity on the company’s part.

“Ulta Beauty recently sent an email featuring Kate Spade New York fragrance with an insensitive subject line and for this, we sincerely apologize,” a representative for Ulta said in a statement to PEOPLE.

“Mental health is a very serious, important issue in this country, and not something we would ever take lightly. We apologize to the Spade family, our Kate Spade New York brand partners and to our guests. Thank you for understanding as we strive to do better.”

After her death, the legendary designer’s husband Andy Spade told PEOPLE, “Kate suffered from depression and anxiety for many years. She was actively seeking help and working closely with her doctors to treat her disease, one that takes far too many lives. We were in touch with her the night before and she sounded happy,” Andy said.

If you or someone you know is considering suicide, please contact the National Suicide Prevention Lifeline at 1-800-273-TALK (8255), text “STRENGTH” to the Crisis Text Line at 741-741 or go to suicidepreventionlifeline.org.