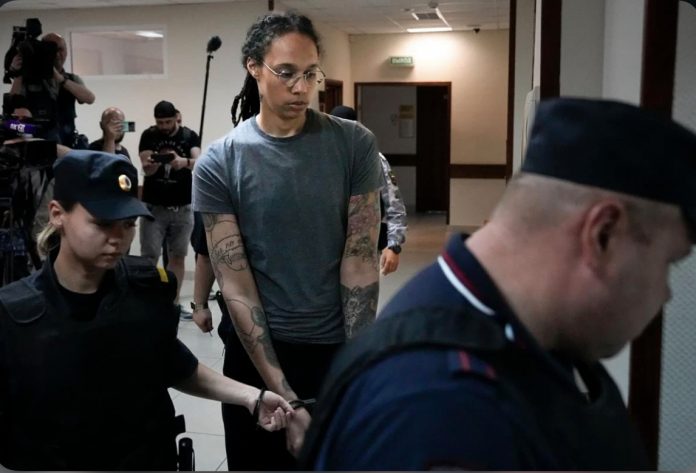 Brittney Griner has been found guilty of drug smuggling with criminal intent. Sentenced to 9 years.

This comes after very emotional testimony from the basketball star as she apologized for her actions.

According to Yahoo, she said:

“I want to apologize to my teammates, my club, my fans and the city of (Yekaterinburg) for my mistake that I made and the embarrassment that I brought on them,” Griner said, her voice cracking. “I want to also apologize to my parents, my siblings, the Phoenix Mercury organization back at home, the amazing women of the WNBA, and my amazing spouse back at home.”

She called it “an honest mistake,” adding: “hope in your ruling it does not end my life.”

Griner lawyer Maria Blagovolina argued that Griner brought the cartridges with her to Russia inadvertently and only used cannabis to treat her pain from injuries sustained in her career. She said she used it only in Arizona, where medical marijuana is legal.

She emphasized that Griner was packing in haste after a grueling flight and suffering from the consequences of COVID-19. Blagovolina also pointed out that the analysis of cannabis found in Griner’s possession was flawed and violated legal procedures.

Blagovolina asked the court to acquit Griner, noting that she had no past criminal record and hailing her role in “the development of Russian basketball.”

Last week, in an extraordinary move, U.S. Secretary of State Antony Blinken spoke to his Russian counterpart, Sergey Lavrov, urging him to accept a deal under which Griner and Paul Whelan, an American imprisoned in Russia on an espionage conviction, would go free.

The Lavrov-Blinken call marked the highest-level known contact between Washington and Moscow since Russia sent troops into Ukraine more than five months ago. The direct outreach over Griner is at odds with U.S. efforts to isolate the Kremlin.

People familiar with the proposal say it envisions trading Griner and Whelan for the notorious arms trader Viktor Bout, who is serving a prison sentence in the United States. It underlines the public pressure that the White House has faced to get Griner released.

White House Press Secretary Karine Jean-Pierre said Monday that Russia has made a “bad faith” response to the U.S. government’s offer, a counteroffer that American officials don’t regard as serious. She declined to elaborate.

Anyone who can look at Brittney on the screen and not see the humanity and severity of this situation is sick. Do not come in my mentions to attempt to justify this horrific situation or say she deserves it. Brittney Griner should be on US soil. BRING HER TF HOME.