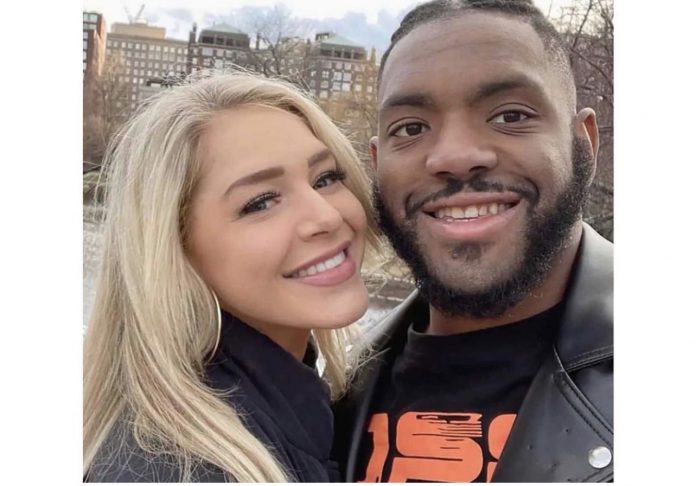 Back in April, we shared a story about the domestic dispute case involving Christian “Toby” Obumseli who was allegedly stabbed to death by his girlfriend Courtney Taylor Clenney.

At the time his family tried everything to bring attention to the case, claiming they needed ‘the community to help them put pressure on the authorities involved in the case.

Social media wasn’t having it chile, but that’s neither here nor there.

Read the details here and here.

Courtney was never charged with his murder, until now!

According to the Daily Mail she was arrested at a rehab facility in Hawaii and charged with murdering her boyfriend at their Miami home.

(she’d been in Hawaii while in rehabilitation for substance abuse and post-traumatic stress disorder.)

Courtney Clenney, 26, insisted that she stabbed Christian Obumseli, 27, in self-defense.

Yet on Wednesday police in Hawaii detained her, ahead of extradition back to Florida.

‘I’m completely shocked, especially since we were cooperating with the investigation and offered to voluntarily surrender her if she were charged,’ said her lawyer, Frank Prieto.

‘We look forward to clearing her name in court.’

Clenney and Obumseli, a cryptocurrency trader, had been dating less than two years, and their relationship was tumultuous.

She was arrested for domestic battery in Las Vegas, and police were called to their home in Austin, Texas, on several occasions.

The pair moved to Miami at the beginning of the year and yet staff and residents at the One Paraiso building where they lived reported multiple domestic disturbance complaints about the couple, and had even moved to evict them.

Obumseli’s brother in April was angered by her not being charged immediately over his death, saying it was ‘because of her ‘privilege’ as a ‘wealthy white woman’ and not because of her self-defense claim.

Clenney, who also goes by Courtney Tailor, then called 911 and claimed she was acting in self-defense when she stabbed him in the shoulder.

But in a statement posted to Instagram, the victim’s brother, Jeffrey Obumseli – and his family – wrote that they do not believe Clenney and demand that she be charged with killing the brother he called Toby.

The model was caught on video covered in blood on her high-rise balcony just after the incident.

‘The bottom line is inextricably clear: Courtney is being treated differently because of her privilege as a wealthy White woman,’ Jeffrey Obumseli wrote on Instagram.

‘Within 24 hours following Toby’s death, the detective on the case prematurely concluded this was not a crime of violence.’

The couple’s friends have given conflicting reports on who was abusive.

Some said that they never saw Obumseli becoming violent with his girlfriend, but that they had seen her hit him before.

After his death, fresh, X-rated content appeared on her OnlyFans page.

It’s unclear if she had pre-planned it to go live before stabbing him.