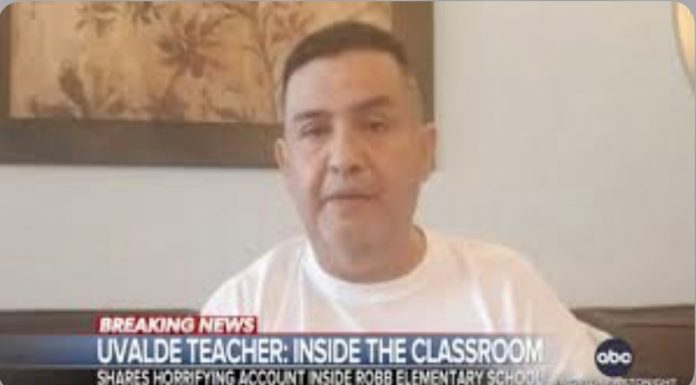 Arnulfo Reyes did an interview with GMA describing the harrowing moments he went through while trapped in the school with the Texas shooter.

According to the exclusive interview said he woke up ready for a good day.

His third- and fourth-grade class at Robb Elementary had finished its final tests the week before.

Awards were going to be handed out.

He planned to show his students a movie, “The Addams Family” — the animated version.

“It was going to be a good day,” Reyes told ABC News anchor Amy Robach in an exclusive interview. “There was nothing unusual that day, we were just walking back to the classroom … to watch the rest of the movie.”

Around 11:30 a.m., however, the normalcy shattered. Reyes said he heard a bang.

Unsure of what it was, he told the students to get under their desks — just like they’d practiced.

“The kids were yelling, ‘What’s going on, Mr. Reyes?'” he said. “[The students] were going under the table, and I was trying to get them to do that as fast as I could.”

The next 77 minutes of carnage “destroyed” Reyes, he said, and forever changed a school, a community and perhaps a country. By the end of his rampage, a gunman had killed 19 students — including all 11 in Reyes’ classroom — and two teachers.

“I feel so bad for the parents because they lost a child,” Reyes told Robach. “But they lost one child. I lost 11 that day, all at one time.”

From his hospital bed in San Antonio, less than two weeks after surviving the second-most deadly school shooting in U.S. history, Reyes offered the most vivid account yet of what transpired inside classroom 111 of Robb Elementary School on May 24.

He also waded into the nationwide debate over gun violence and slammed local police as “cowards” for failing to act faster. And while Reyes recovers, he’s already plotting his next act: ensuring this never happens again.

“The only thing that I know is that I won’t let these children and my co-workers die in vain,” he said. “I will go to the end of the world to make sure things get changed. If that’s what I have to do for the rest of my life, I will do it.”

Before the gunman entered his classroom, Reyes said he told his students, “Get under the table and act like you’re asleep.” When he turned, he saw a blur — and then gunfire.

Two shots rang out. Reyes immediately “knew something was wrong,” he said. He couldn’t feel his arm, and he fell to the floor as the gunman fired indiscriminately into the classroom of 10- and 11-year-olds. After a short time, silence fell over the room.

“I prayed that I wouldn’t hear none of my students talk,” he said. “And I didn’t hear talk for a while. But then, later on, he did shoot again. So, if he didn’t get them the first time, he got them the second time.”

Wounded on the ground, Reyes said he followed his own advice and pretended to be unconscious. Reyes said the gunman again fired his weapon.

“And that was the second time he got me,” Reyes said. “Just to make sure that I was dead.”

The second gunshot pierced Reyes’ back and lung.

“I had no concept of time,” Reyes said. “When things go bad, it seems like eternity. The only thing that I can say is I felt like my blood was like an hourglass.” In the 14 days since the shooting, Reyes said he has undergone five surgeries and twice had his blood replaced.

Unbeknownst to Reyes, parents and onlookers eventually gathered outside of the school, encouraging officers to enter the building. It wasn’t until 12:50 p.m. when a tactical unit finally breached the classroom door and killed the gunman.

“After that it was just bullets everywhere,” he said. “And then I just remember Border Patrol saying, ‘Get up, get out,’ and I couldn’t get up.”

In the wake of the shooting, law enforcement has come under immense scrutiny for failing to act faster. Seventy-seven minutes passed from the time the gunman entered the school until officers breached the door and killed him.

“They’re cowards,” Reyes said. “They sit there and did nothing for our community. They took a long time to go in… I will never forgive them.”