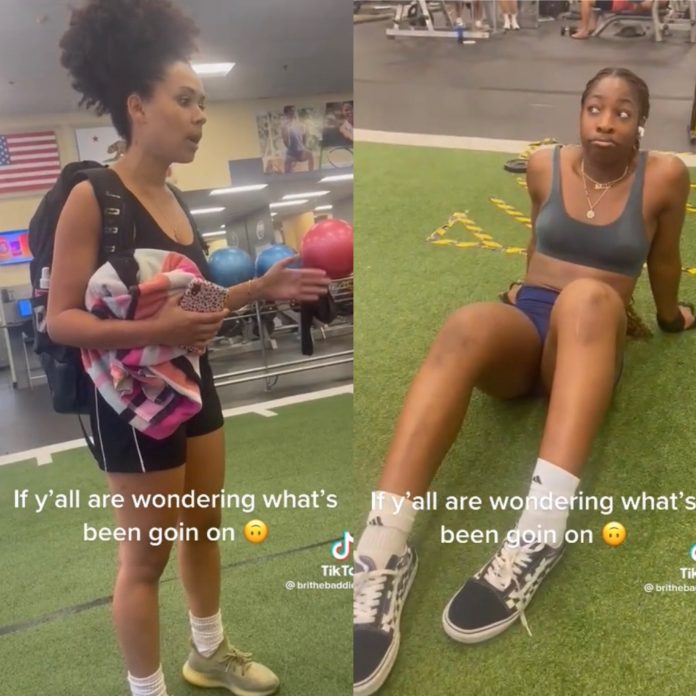 Yall get into this storytime. If you are a gym girlie ….like a true gym girlie …then you know that most of the time you are trying to get in, do your thing, and get out.

A woman on TikTok who calls herself ‘brithebaddie_2’ shared a video of herself getting confronted by another woman who said she looked at her man.

Bri explained in her storytime that she goes to the gym four times a week and she noticed a couple earlier in the week.

The woman worked out next to her two days prior to the confrontation, which was odd.

The woman in the video said her man told her, that Bri was wiping her shorts in front of him and picking up the weights ‘extra slow’.

Watch the confrontation below:

the way i would’ve just walked away like girl be fr 😭 pic.twitter.com/vYFF1bJ5cA

The comments pretty much sympathize with Bri most people calling the woman out for being insecure and calling her man out for starting problems.

One user said:
The bf is literally stirring the pot, seems like he’s looking for unnecessary drama. His gf is projecting her insecurities onto the other girl. They both seem very problematic, so they’re perfect for each other

Kim Possible
Her man was definitely the problem & starting unnecessary problems for no reason.

“That day” gooottdaamn she must’ve went home and was having nightmares about you. Cause why she wait DAYS to finally say something?😂

Wickedgamewitch
I think she was cheated on! She’s not feeling right w/ herself and the relationship. This becomes the behavior after ur world has been rocked.

Mariah Caldwell
my girl is literally sweatingggg…. she is not concerned about anyone else in that gym

Oh girl, take this up with your man and keep it moving. pic.twitter.com/coI3O1HIQP

Her man after setting her up and embarrassing her pic.twitter.com/RcOPKbIDZn

The way I would’ve tapped my earbuds and kept working out and let her continue her conversation with herself.. cus what ? pic.twitter.com/KITG0eIfAJ

Its giving, “Barbara this is Shirley”.