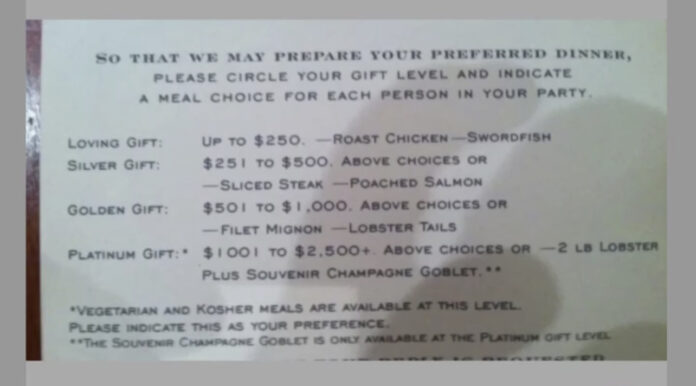 Would you do this? On Reddit a photo went viral of a wedding RSVP that showed different food options for those invited to the event.

A couple appeared to offer their wedding guests better food options based on how much their gift cost.

As reported by The Independent and The Mirror, an unidentified couple appeared to send wedding RSVP invitations that paired gift prices with food options. A photo that purports to show the invitation was shared to the r/Wedding Shaming forum. 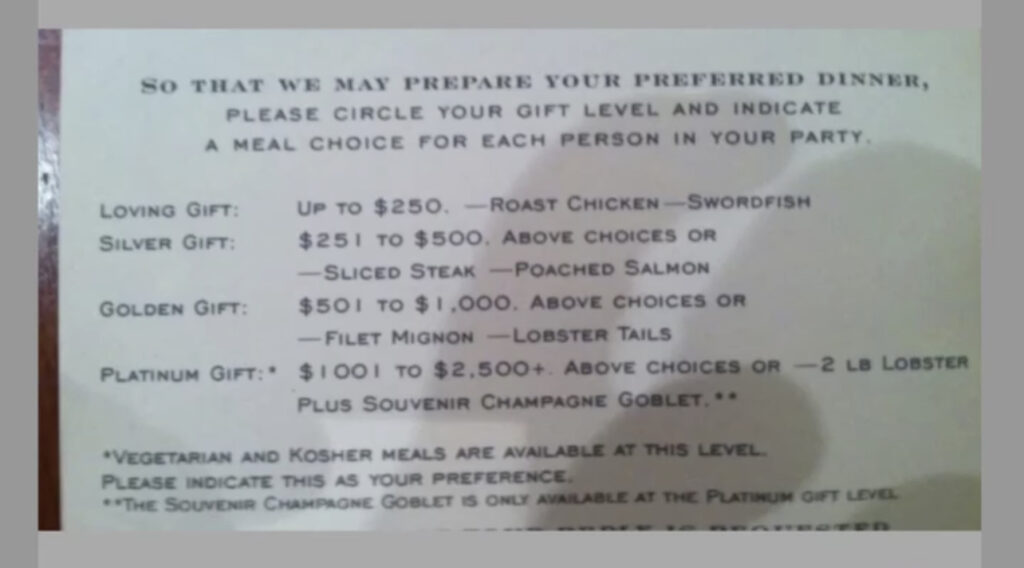 The photo purportedly showed that guests who purchased a gift worth up to $250 were classified in the “Loving Gift” category, which afforded them meals like roasted chicken and swordfish.

The “Silver Gift,” priced between $251 to $500, appeared to include options like sliced steak and poached salmon. The “Golden Gift,” set between $501 to $1,000, appeared to upgrade meals to filet mignon and lobster tails.

The fourth tier, titled “Platinum Gift,” appeared to offer two-pound lobsters and a souvenir champagne goblet for $1,001 to $2,500.

The RSVP ticket then said vegetarian and kosher meals were available at the “Platinum Gift” level.

Some Reddit users questioned whether the RSVP was sent out for a wedding or even an expensive gala of some sort.

The original Reddit poster said they came across the photo in a Facebook group and are “desperately waiting for some more information and hoping that it’s just a joke.”

Other brides-to-be have made headlines for their wedding restrictions and rules.

Last month, a bride on TikTok said she received criticism for cutting down wedding costs by using fake flowers and forgoing a traditional cake.

Earlier this month, another bride on TikTok made waves after asking her bridesmaids to pay $500 towards a bachelorette party.

Comment below and let us know if you would actually serve better food options according to the gifts?

We all agree it’s tacky over here! What do you think?