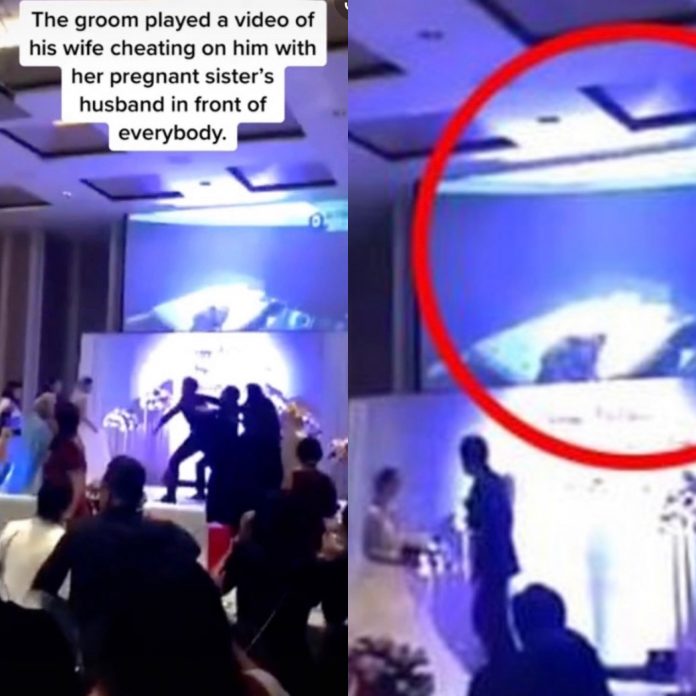 Y’all have got to tell us what sign this groom is, because the way he calmly exposed this lady after going through an entire wedding ceremony, had us shook.

According to The Sun, the footage shows the couple walking down the aisle at their wedding reception in Fujian in south-eastern China.

When they finally reach the center of the stage, the video plays on a massive projector screen in the background for five minutes, reports local media.

The groom pushes her and is heard saying “Did you think I didn’t know about this?”.

The bride is then seen throwing her bouquet of flowers at her spouse.

The resurfaced clip has gathered almost six million views and thousands of comments.

The video is titled “cheating bride” and has the caption: “The groom played a video of his wife cheating on him with her pregnant sister-in-law’s husband in front of everybody.”

But not everyone was pleased by the groom’s act of revenge.

Some asked why he had even bothered to marry the bride if he knew she was doing the dirty behind his back.

“Isn’t this at the party so doesn’t that mean they already said I do?” one person wrote.

“Why’d he go through with the wedding?” asked another.

A third posted: “So why did he waste all that money on the wedding?”

A fourth reasoned: “Maybe he found out too late and the wedding needed to be paid for regardless whether they broke it off.”

Others enjoyed the grueling public humiliation.

“Best revenge – in front of all their family and friends,” one user commented.

“Man stood there knowing the calamity he’s about to cause,” said a second.

It had been reported that the bride had an affair with the husband of her pregnant sister.

Asia One reported at the time that the couple has been together for two years and engaged for six months before their big day.

It’s understood when the groom found out about the affair, he decided to “humiliate” the bride.

Groom Plays S*xtape Of Cheating Wife During The Wedding 😶 pic.twitter.com/HJ7szVTnEr

You got married, then showed a video at your wedding reception of your wife cheating with the sister’s husband. BUT YOU GOT MARRIED stupiiiiiiiiiiiid