DaBaby dropped a new album called Baby On Baby 2 and according to Uproxx it fell flat flat.

The album underperformed on the charts to the pace of just 16,000 album equivalent units.

To be fair, that’s way better than a lot of artists manage (some would say “most”) — but it’s also well below what the original Baby On Baby pulled in in its first week: 124,000 units.

On his Instagram Story, Baby reposted a fan account’s post about his sales pace, writing “Not bad for da BlackBalled Baby.” 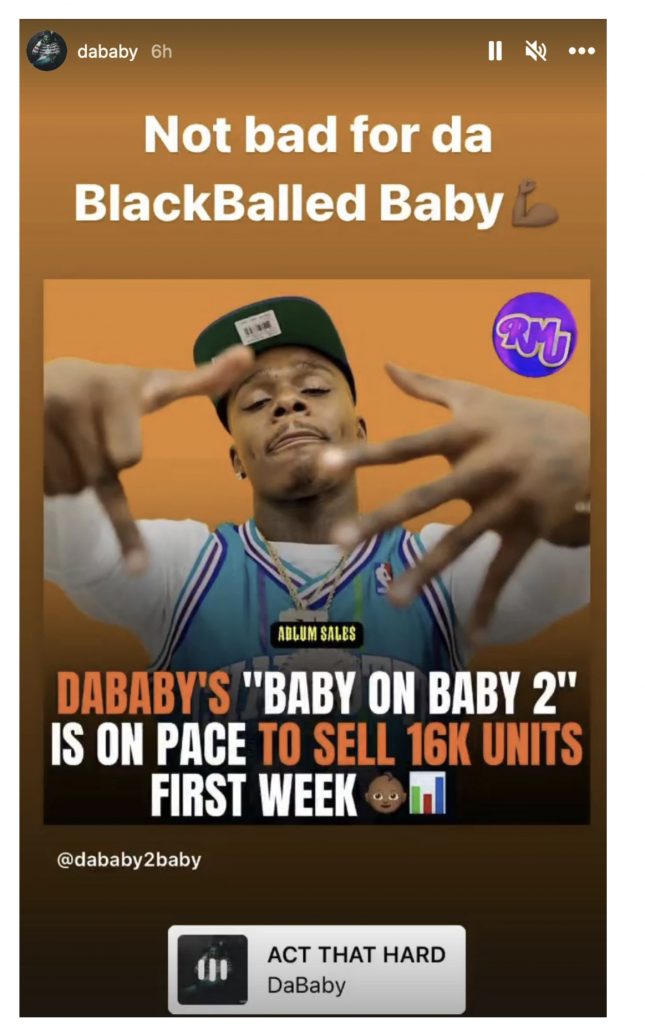 Of course, DaBaby hasn’t really spoken to why he was “blackballed“: His homophobic comments at Rolling Loud Miami in 2021 and his utter refusal to seriously apologize or show any follow-through on the promises he’s made to make things right.

It’s also not like he promoted Baby On Baby 2 all that well; most fans on Twitter say they were unaware he was even dropping an album until headlines that he’d made distasteful comments about Megan Thee Stallion on it began cropping up on social media.

Dababy is really a loser. This is the saddest attempt at trying to maintain relevance pic.twitter.com/z9lUBS0giK

People acting like DaBaby is blackballed when in reality his music isn’t good enough to overcome the negative press at this point (public spat with Danileigh, HIV comments at RL, pillow talking about Meg by name). You can only be the villain when the music is undeniable.