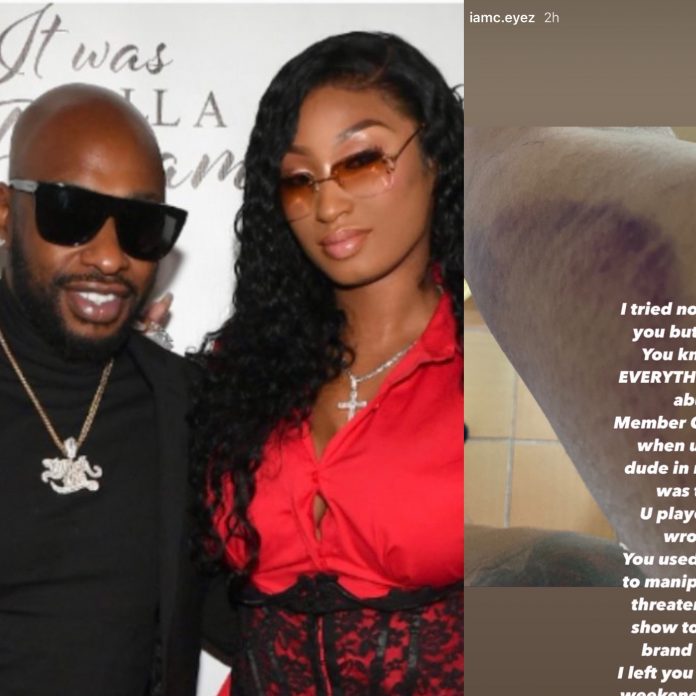 Ceaser Emanuel recently revealed that his ex-girlfriend Suzette Samuels was the one who leaked footage of him abusing dogs because he finally left her alone.

He appeared on a podcast and gave his perspective on what he thought happened.

In response to that video Suzette is now accusing him of being abusive towards her.

On her Instagram stories, she shared a photo of a bruised portion of her skin accusing Ceaser of trying to tarnish her name and saying he has real enemies he should be worried about.

She claimed she received those bruise marks because Ceaser saw another guy in her DMs.

In an exclusive with The Shaderoom Suzette denied leaking the animal abuse video.

She said:
“I’m not the only one who had access to that video. Three people have that video. Ceaser is beefing with two of them,” she claimed.

Suzette said that Ceaser has so many enemies that someone tried to kick their door down in their former home last year, and that’s why she moved.

“Why would I leak the video?! He was threatening me that if I left, he would have production make me look crazy this season,” she explained.

Watching this interview… I knew Suzette leaked that video, it’s home footage who else would have access to that smh now I really feel bad for Ceasar, he said the dog attacked him I would hit the mf with a chair too 😩