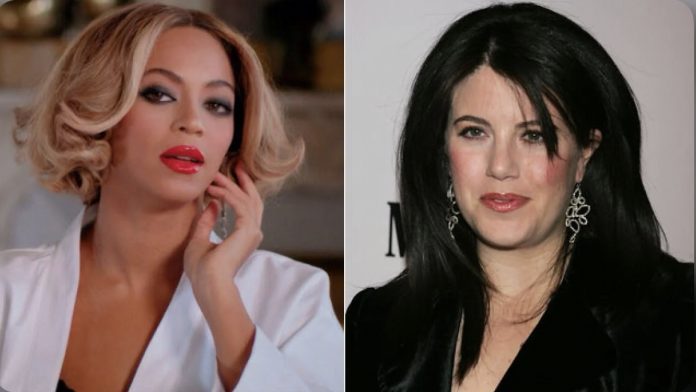 Monica Lewinsky claimed a few hours of fame on Twitter when she suggested that Beyonce remove a ‘Partition’ Lyric that referenced her affair with Bill Clinton.

uhmm, while we’re at it… #Partition

“He popped all my buttons, and he ripped my blouse, He Monica Lewinsky-ed all on my gown.”

Of course, the hive was all over it with the quickness.

One user reminded her of an interview she did with Vanity Flair where she joked about it. (even though we do not think she was joking)

Is this you thanking Beyoncé and joking about it yourself to VANITY FAIR? It seemed fine then 🤔🤔🤔🤔 @MonicaLewinsky pic.twitter.com/Hvh4T8831d

Another said she needs to be realistic!

Monica girl be realistic… You’re saying that Beyoncé should remove a line from her song that came out 9 years ago??? And why are you only talking about Beyoncé, there were plenty of other artists who were more disrespectful. Beyoncé’s line wasn’t even bad. So calm down

Monica Lewinsky thought we was gonna agree wit her with the Beyoncé hate train going on… not today, nutty buddy

Commotions caused by #RENAISSANCE so far:

also beyonce: he monica lewinsky'd all on my gown

Monica Lewinsky…you willingly got on your knees and mouth harassed oval office peen and was dragged for it for YEARS but today, TODAY you found time to come for Beyonce? pic.twitter.com/b7ODAZRvlG

Baby you gave a blow job to a married man. Be mad at your momma for not raising a better child, not Beyoncé. 🥴 pic.twitter.com/nzwzVWN560

beyoncé was NOT the first person to make a monica lewinsky reference yet that’s the only person she ever addresses… not to mention it’s been a decade.

Monica is clapping back, claiming that even though there are a ton of artists that referenced her affair Beyonce was the one she was most disappointed by.

seriously?! i appreciate that this may be the first thing i’ve said on this that’s come across your radar, but please consider exactly that. and of all the musicians who’ve done this, she was the one i was the most disappointed by… because i was such a fan.

Monica you did the act!!!! That will live with you forever you've got to move on sweetie