In very sad news, the father of popular TikTok duo Enkyboys’ has died after his battle with cancer.

According to TMZ A source close to the family tells TMZ, Randy passed Wednesday morning in hospice after his struggles with colon cancer … a health battle he provided updates about throughout his fight.

Randy broke the news about his condition back in April, telling fans he was diagnosed about 6 months prior, and given 2-3 years to live. He said chemotherapy could extend things a possible 5 more years.

♬ Swae Lee and paddybeatz Not so Bad at all – paddybeatz

The viral star created a GoFundMe to help pay for his treatments — after he claimed he was denied at a cancer center at the University of Texas — stating they didn’t take his insurance.

He and his son, Brice, used their social media platform to spread awareness about colon cancer … and continued to gain serious popularity from their radiant father-and-son dynamic.

Randy gave his followers another update in November, detailing everything he’d gone through in only a few months … hoping to be a great example in a year’s time, “when I beat it.”

For those unaware, Brice landed a spot on NBC’s “Lopez vs Lopez” … cracking audiences up with his hilarious character, Chance.

Some of their most popular videos 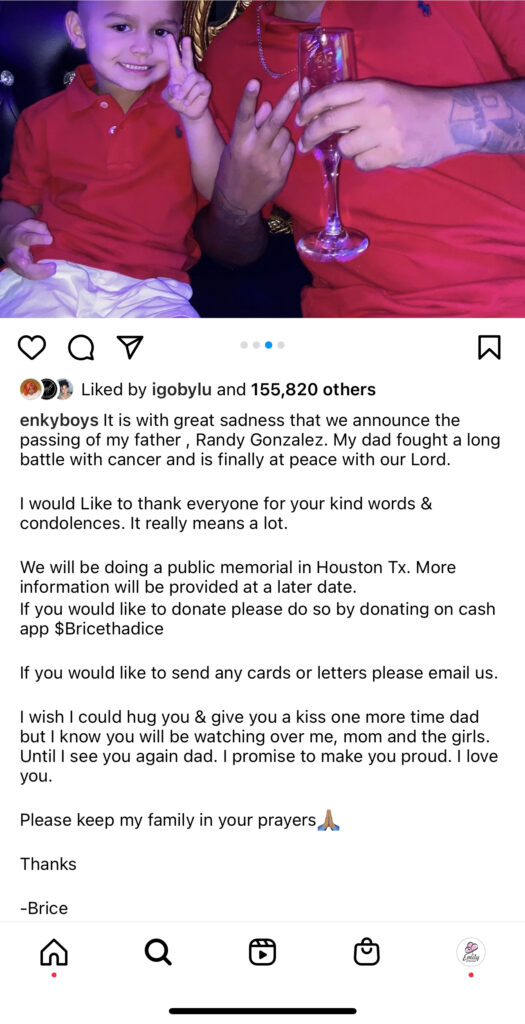 😔 Prayers for the family and little Brice.

Substitute Teacher Throws Student Down And Pushes Him Out Of The Class For Calling Him The N-Word: “Get tf out my class”

Relly B Lands A Job With Fox News

Relly B Lands A Job With Fox News