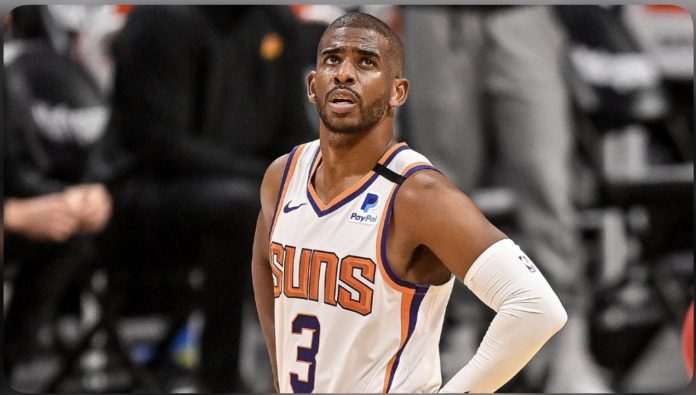 Like many of us Chris Paul was ready to defend his mother and his wife when he realized a Mavericks Fan pushed them while they were in the stands.

The fan was eventually removed from the game.

According to Yahoo Suns player Chris Paul’s mother and wife were harassed and shoved around at the game.

“Wanna fine players for saying stuff to the fans but the fans can put they hands on our families….f**k that!!” he wrote, The Guardian reports.

Wanna fine players for saying stuff to the fans but the fans can put they hands on our families….fuck that!!

Some folks on twitter suggested that the fan is just a kid and probably simply overwhelmed:

He’s a kid. I think he was just overwhelmed that his actions have consequences in the real world

Miss me w/that “he’s a minor” shit about that kid who put hands on CP3’s momma. He’s old enough to know better. And definitely old enough to where if he put hands on the wrong person’s momma,someone would have no problem beating his ass. Yall better stop playing w/folks out here

Chris Paul was not happy. 😳

The Dallas Mavericks said they know about the altercation at the American Airlines Center and later released a statement, according to ESPN.

“It was unacceptable behavior and will not be tolerated. The Mavericks, along with American Airlines Center, swiftly removed the fan from today’s game,” the statement read.

The NBA has previously addressed unruly behavior by fans, most recently after Kyrie Irving had a bottle thrown at him during a game in 2021.

Elizabeth Maringer, a senior vice president and assistant general counsel for the NBA, said the league strives to discourage fans from partaking in violent behavior at the games.