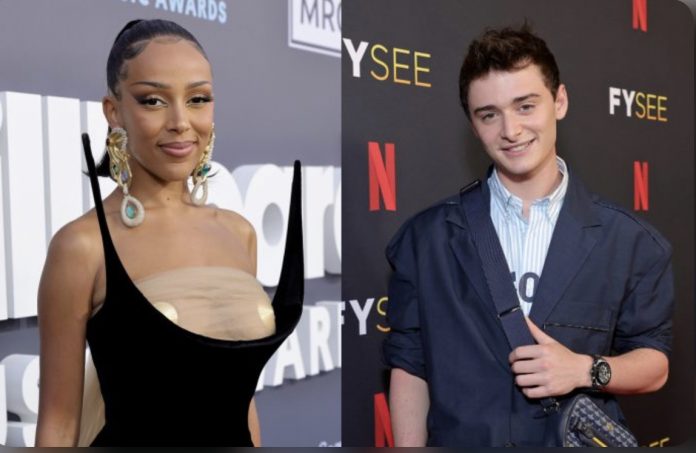 According to People Doja asked the actor to help set her up with Joseph Quinn, 29, who plays newcomer Eddie Munson in season 4 of Stranger Things.

“Noah can u tell Joseph to [hit me up]. wait no. does he have a gf?” Doja asked Schnapp through his Instagram DMs.

Schnapp, who plays Will Byers on the hit show, responded by telling Doja to slide into Quinn’s DMs on Twitter or Instagram, though she struggled to find them.

“idk his ig ior [sic] twitter. He doesn’t have a DM to slide in,” she wrote back.

Playing the part of wingman, Schnapp responded by sending her a link to his Instagram page, writing, “right here ma’am.”

After that exchange, the 17 yr old did what most 17 yr olds would do! He made a TikTok for clout exposing the entire conversation.

Doja Cat then went on live to blast him for doing it.

On Live she said:
“To be fair this is like a kid, I don’t know how old he is but he’s not even over like 21,” Doja said of the 17-year-old actor, saying that she was trying to be “super fair” in the situation, per Newsweek.

“But the fact that Noah did that is so unbelievably socially unaware and wack,” the Grammy winner continued. “That’s like borderline snake s—… that’s like weasel s—.”

“I’m not saying that encapsulates his entire personality. Noah is not like the definition like I wouldn’t imagine he is,” she continued. “Maybe he is?”

Schnapp’s since-deleted TikTok had racked up more than 4.2 million likes and 20.9 million views as of Thursday, with many fans taking to the comments to jokingly call out the actor for exposing Doja’s ask, and agreeing with her thirst over Quinn.

“Do we blame her? NOOOPE,” one user wrote, while another added, “OMG NOAH HAS NO MERCY.”

Doja is getting called out too!

People think she went hard on Schnapp, but should have known better.

One of the biggest pop stars out right now does not need a teenager, even his castmate, to get a celebrity crush’s contact info. Why was she DMing a teenager?

She cannot be serious in thinking this is a teachable moment for anyone but herself. https://t.co/M9Rk1lFrPT

She knew how to DM that dude she was asking about. Her real target was that teen, she just wanted an excuse to slide into his DMs.

i don’t know what’s more funny the filters while she’s being serious or the fact that doja cat is beefing with noah schnapp😭 https://t.co/VQuxDBb7tR

why is doja cat (26) going on live and calling noah schnapp (17) a snake / weasel for a 20 sec TikTok he made ??? embarrassed for her pic.twitter.com/iNXuk0NmXY

why is doja cat (26) going on live and calling noah schnapp (17) a snake / weasel for a 20 sec TikTok he made ??? embarrassed for her pic.twitter.com/iNXuk0NmXY

joseph quinn getting off the plane in london and seeing this whole doja cat & noah schnapp situation likepic.twitter.com/0KdOGrLvrC

joseph quinn in his own little world completely unaware of what’s going on with doja cat and noah schnapp pic.twitter.com/HbxqfDkjVM