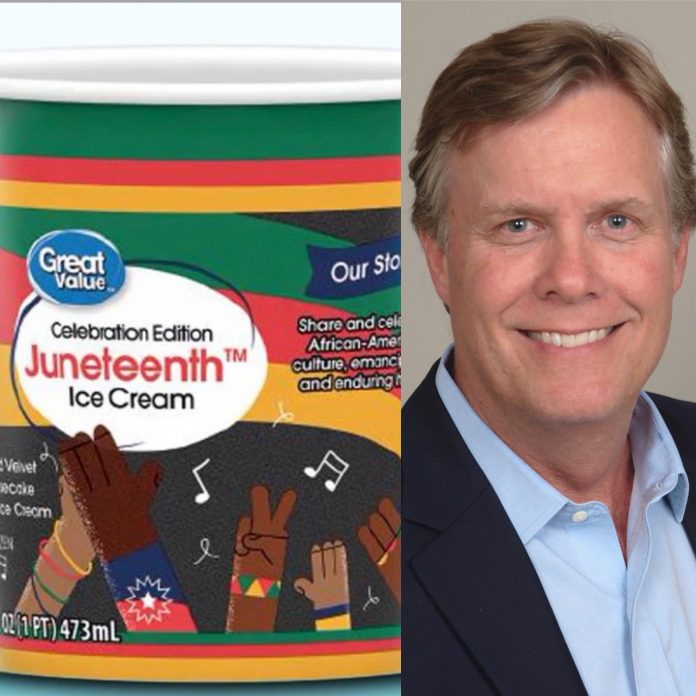 Just in time for Juneteenth celebrations, Walmart lined it’s shelves with it’s one of a kind Juneteenth Ice Cream.

According to WRAL the ice cream had a swirl of red velvet and cheesecake flavors and urged buyers to “share and celebrate African-American culture, emancipation and enduring hope.”

Juneteenth, or June 19, is the oldest nationally celebrated commemoration of the abolition of slavery in the U.S.

The day is meant to commemorate the end of slavery for slaves in Texas, who weren’t emancipated until two years after Abraham Lincoln’s Emancipation Proclamation.

And while all that sounds great the community was not having it, not in 2022!

They’re trying to bastardize the meaning of Juneteenth with Pan African & Ethiopian flag colors, exploiting Native Black Americans history by trying to capitalize financially off of our ancestors fight! Look at what Walmart and other corporations are doing. #Juneteenth

WRAL News found the item at a Raleigh Walmart, but the ice cream was not located in the system at check-out and was unavailable for purchase.

One employee said they would be throwing the ice cream out.

Let’s be clear the community did it’s research and the one thing that stood out, was the Trademark.

Part 2: Juneteenth Ice Cream As an intellectual property attorney I won’t speculate as to why this company filed for a trademark for the name #juneteenth #icecream #trademarklawyer #greenscreen #greenscreenvideo

If you read our blog then you know we love a solid ‘black owned’ list so if you are looking for an alternative to this ice-cream, shop Creamalicious, black owned with darn near the same flavor.

If you’re at Walmart and you’re thinking about buying the one on the left. Take a few seconds to look for and buy the one on the right. They are the same flavor except Creamalicious Ice Creams is black owned. pic.twitter.com/hrqb6vhg6h

Walmart literally saw a successful small Black business and thought they could get away with stealing their flavor and re-branding it for Juneteenth.

In all seriousness……
If you have seen the Juneteenth Ice Cream from Walmart, go ahead and grab some Creamalicious Red Velvet Cheesecake instead! Walmart could have used this opportunity to highlight this brand instead of making a cheap copycat for OUR Independence Day. pic.twitter.com/avlIkjvoOU

LET’S HELP THIS SISTER SELLOUT HER RED VELVET CHEESECAKE ICE CREAM THAT WALMART SHOULD HAVE PROMOTED FOR JUNETEENTH OVER COPYING AND CO-OPTING JUNETEENTH! pic.twitter.com/8Q9hXiekrh

As for Walmart, they have since apologized in a statement to Fox news.

“Juneteenth holiday marks a celebration of freedom and independence,” Walmart said in a statement to Fox. “However, we received feedback that a few items caused concern for some of our customers and we sincerely apologize. We are reviewing our assortment and will remove items as appropriate.”