Nicki Minaj had us a little shocked on the last episode of Queen radio chile.

The Freaky Girl rapper seemingly went after RHOBH’s Garcelle Beauvais who was also on the last two seasons of THE REAL.

According to Yahoo during her time on the show, Beauvais interviewed several people, including Jennifer Hough, the woman who accused Minaj’s husband, Kenneth Petty, of sexual assault.

Although Hough’s interview happened almost a year ago, Minaj gave us her opinion on Beauvais.

“It’s because they wanted ratings,” Minaj said. “And the next thing that happens to them, they are canceled. And now this lady is on one of the Real Housewives talking about, ‘Leave my son alone! Don’t leave comments under my son’s page!’”

While the interview on The Real definitely provided Hough with a platform to tell her side of the case, there seemed to be no malicious attack on Minaj or her son. The interview aired on Sep. 21, 2021, and was the first time Hough spoke out on camera about the 1994 assault case.

As fans listened to Minaj’s Queen Radio show on Sunday, some were confused about why she took direct shots at Beauvais, as the host was just doing her job.

“I’m so confused…Garcelle simply did an interview, it was part of her literal job!” said Twitter user @MBC0801.

“Nobody’s going out of their way to attack nicki’s son… and if they did, it would be wrong! Two wrongs don’t make a right… that’s unfair to call her out for simply doing what was asked of her!”

Nicki also went after Loni Love body shaming her by responding to a Tweet suggesting she get dragged as well. To make matters worse, Tamar Braxton liked the tweet. 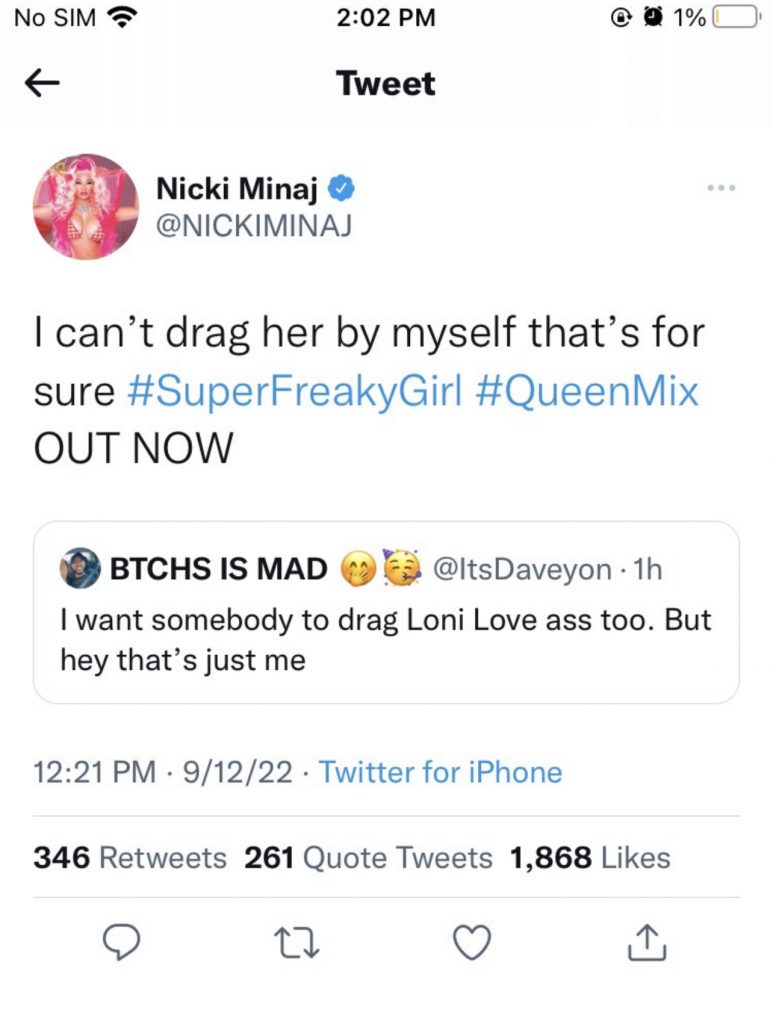 Beyoncé isn’t even on social media. The Beyhive buzzes all on thier own but Nicki fans the flames and even gives the green light for attacks. She just retweeted someone asking for a drag on Loni Love and I haven’t seen a single tweet from Beyoncé like that

Girl Nicki called out Loni Love and Tamar got under the post and agreed with Nicki. It’s a bunch of mess going on with Nicki Minaj. She’s suing a few people, Megan was in it last night and today it’s Loni love

A 71-year-old Black Woman Who Won $20,000 At A Casino Is Now Suing Michigan Bank For Racial Discrimination After Employees Refused To Cash Her Check

A 71-year-old Black Woman Who Won $20,000 At A Casino Is Now Suing Michigan Bank For Racial Discrimination After Employees Refused To Cash Her Check