by Emily Cottontop
in Fashion
0

Every year we look forward to the Pyer Moss runway show because it’s always a vibe and as Elle describes it – “an extravagant display and celebration of Blackness”.

Most of the reviews had one thing in common, his show, held at the Madame CJ Walker Estate was an inspiring reminder that we should not be ashamed to show up as our full authentic black af selves. There is so much to be proud of. 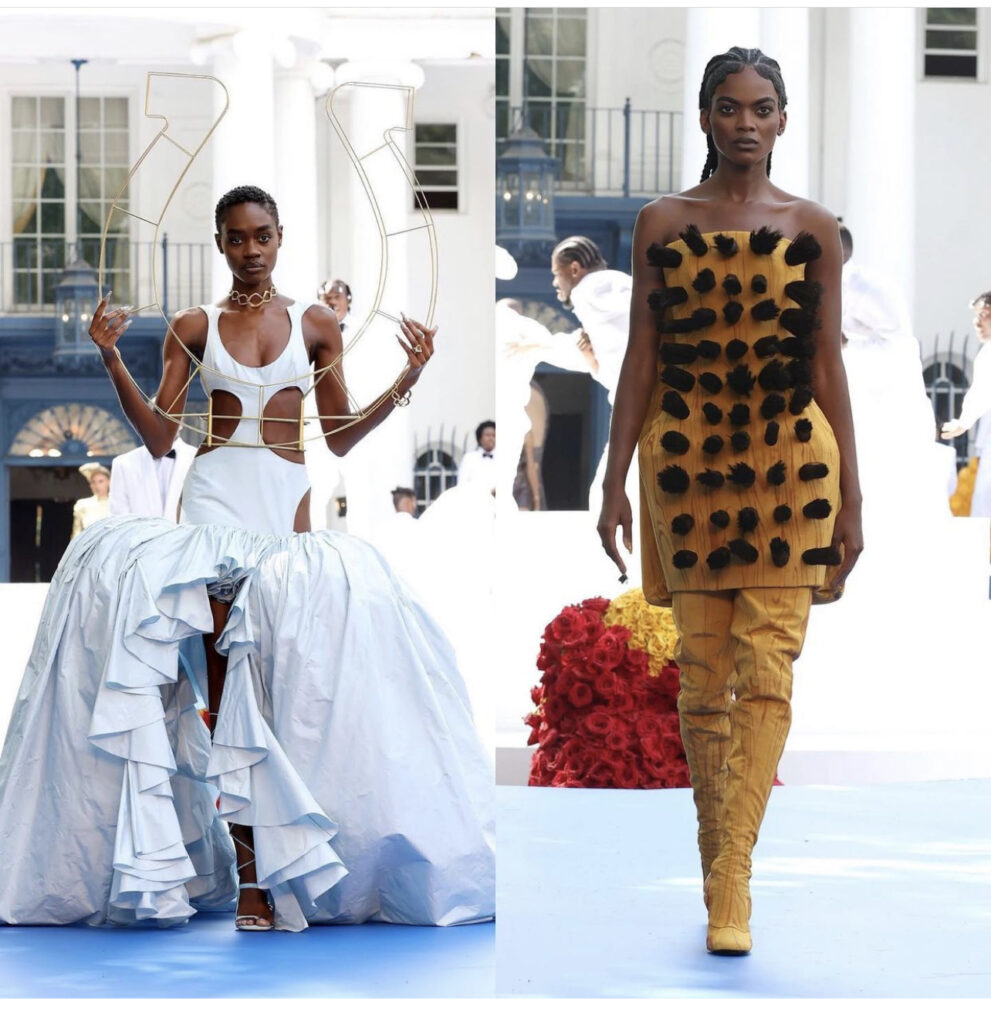 Read below via Elle:

The show was a soundtrack that’ll keep your Shazam app running over time, and a Black history lesson taught through every texture, fabric, and cut that waltz down the runway.

But on Thursday, July 8, the day Pyer Moss designer Kerby Jean-Raymond was set to make history as the first Black-American designer invited by the Chambre Syndicale de la Haute Couture Collections to make his couture debut, Raymond and his guests were thrown a massive curveball.

Guests peppered the front lawn Villa Lewaro, a 20,000-square-foot mansion built and lived in by Madam C.J. Walker—one of America’s most famous Black self-made millionaires—awaiting the start of the show, until a downpour of rain claimed Pyer Moss’s shine.

Staging a show at the estate of a pioneering figure like Madame CJ Walker represented much more than her legacy of Black affluence and power, though. It was a symbol of resilience and strength.

History books have taught us that our journeys have been marred with obstacles, but in the end, it’s our resilience and determination that turn our challenges into successes. Kerby would have thrown the towel in, but he had a plan B in mind: party.

The next two hours saw the crowd scrambling back and forth from their seats to a set of tents lodged in the back of the estate for shelter, originally intended for the post-show cookout.

“I love that we’re getting thru this as a family lmao this is wild,” Raymond tweeted at one point. And like any strong family unit, guests refused to give up on the Pyer Moss show and occupied their time by partying under the tent instead.

The Spinners’ “Could it be I’m Falling in Love” blared through the speakers, causing a break out of the electric slide in the middle of the tent, while other folks on the outskirts devoured plates of rasta pasta, jerk chicken, baked mac and cheese, and other barbeque dish staples. The Isley Brothers’ “For the Love of You” was next up in the DJ’s rotation. 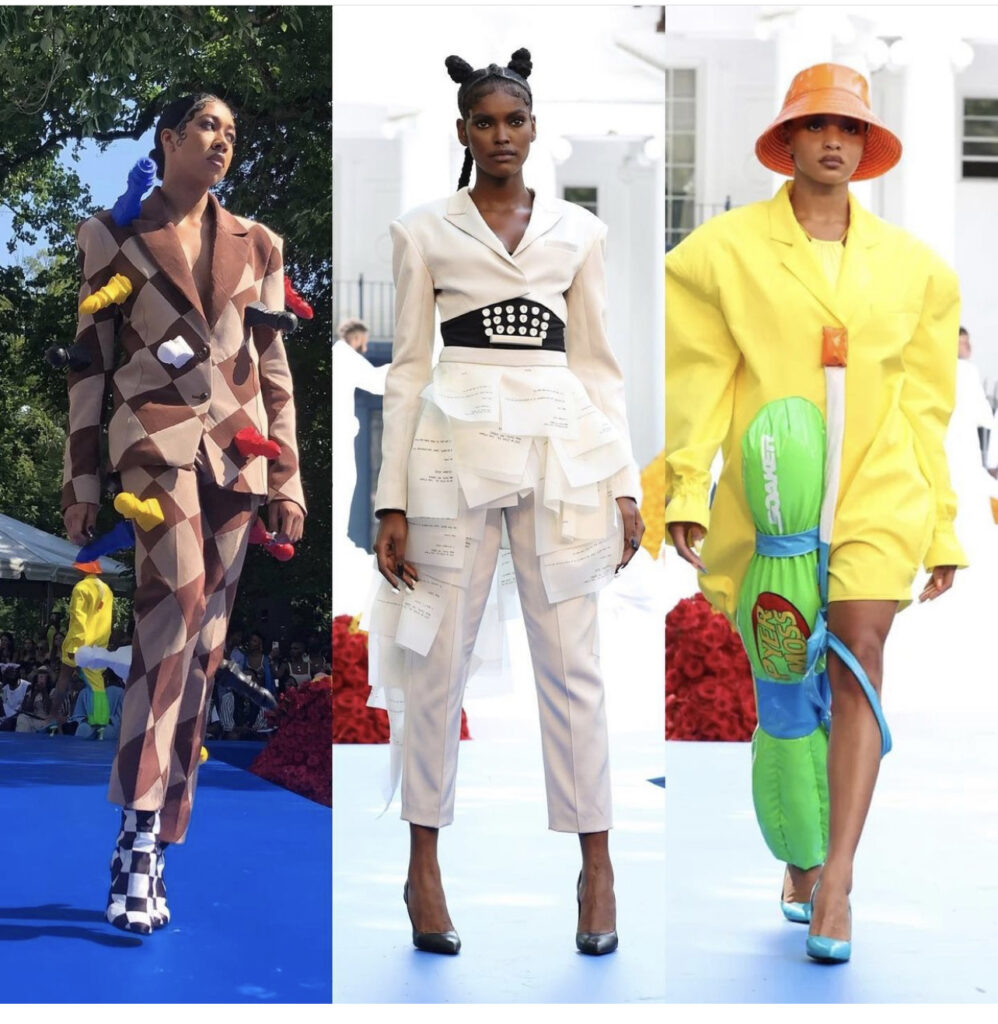 One after the other, everyday essentials made their way onto the runway, from a bottle cap worn as a skirt to an ice cream cone pants set to a horseshoe adorning a gown.

It was a buffet for the eyes, until it settled in your mind that there’s actually a pattern happening on the runway. School is no longer in session but your Google search history would be full by the final look.

A model dressed in a peanut butter jar reminded us that George Washington Carver may not have invented peanut butter, but he did develop over 300 ways to use peanuts; Aoki Lee (Kimora Lee Simmons’ daughter) modeled a brown checkered chess suit, a game that can be traced back all the way to Africa.

Another model emerged in an emerald green curtain dress held up by an actual curtain rod to give flowers to Samuel Scottron, the man best known for inventing the curtain rod.

It all started with a list. After coming across a list of Black innovators from the Library of Congress, Raymond realized he didn’t know all the Black people who contributed to our everyday lives.

“I went through the list like, Shit I didn’t know any of this. I asked people in my office if they knew of the innovators and nobody knew. The general concept of the collection is these are the innovations by Black people.

I wanted to re-introduce them to Black people. I feel like no one was going to get that it was about inventions,” Raymond told an intimate group of editors post-show.

“Everyone knows me as the Black Lives Matter designer, and I am that too, but I never really get to show my sense of humor.”

Elsewhere in the show were more inventions by Black figures, like the air conditioning unit fastened to a golden yellow maxi dress and a tower of hair curlers draped around an orange and blue robe—a look that Raymond said took four months to complete.

“We had people sitting there curling all the hair and putting them onto each hair roller,” he added.

In true Pyer Moss fashion, the show culminated with a final message using scattered magnets on the refrigerator that read, “But who invented Black trauma?”

It calls to mind the message on the tubes of weed Raymond handed out days earlier. “We’re tired of waiting on reparations and an apology. Til then … we’re getting in the weed business.”

Society was built off the backs of Black people, yet our contributions go unnoticed while others benefit from our labor.

Kerby’s message points out the racial disparities in marijuana history, especially how the industry’s growth comes at the expense of the many Black people incarcerated or punished for marijuana possession.

“We’ve been discriminated against and disproportionately jailed. On top of that, we’re not participating in the upside of the industry,” he tells ELLE.com. So Raymond already has his solution.

The designer’s newest endeavor is a collaboration with Viola, one of the largest Black-owned cannabis companies, to create a new collection of cannabis products in which he hopes “to benefit the communities that were harmed by drug enforcement in the past.”

Trauma may have caused hindrances in our past, but Raymond is on a mission to defining a new future for Black entrepreneurs.

And if you are wondering about the Rollers

The piece was created by Rio Warner by hand. This is what she shared via Instagram:

Such an honor to work on this incredible piece for @pyermoss Couture fashion show over at @studiounbiased ✨I spent days and days and days hand sewing the hair rollers until my fingers bled.

Honored to work with a team of such amazing artists on a historic show as Kerby Jean-Raymond becomes the first Black American designer to show during Paris Couture fashion week.